Tony Hawk to Ollie Into World of Collectible NFTs 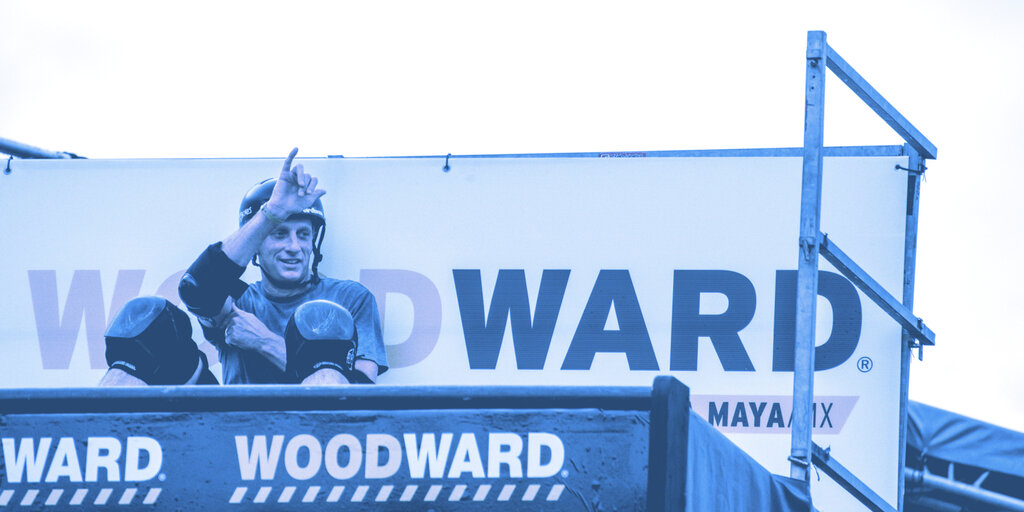 NFTs are digital items that can take the form of still artwork, an animated gif, video game asset, or a video, and they can be individually authenticated via a blockchain. Digital artists have gravitated toward the technology of late due to the ability to sell verifiably scarce artwork on the internet, where images and videos are easily copied and shared.

In this case, Tony Hawk will offer up a video of what he’s calling his final 540-degree ollie trick on a halfpipe. Hawk is revered in part for doing the first-ever 900-degree skateboard rotation trick at the 1999 X-Games. But that was more than two decades ago, and Hawk is now 52 years old and long retired from competition. He shared a glimpse of the move via Instagram in comparison to his first-ever 540 on film back in 1989, and appeared to break down in tears after completing the move for the final time.

Did my last ever ollie 540 today. You can compare it with my first one 32 years ago. This one meant a lot to me https://t.co/tExDDRFzb4 pic.twitter.com/Ggql2uADtg

Hawk reflected on why he’s decided to retire the move from his skating arsenal: “They’ve gotten scarier in recent years, as the landing commitment can be risky if your feet aren’t in the right places. And my willingness to slam unexpectedly into the flat bottom has waned greatly over the last decade,” he wrote. “So today I decided to do it one more time… and never again.”

According to Hawk, videographer Chris Gregson’s shot of the move will be sold as an NFT “in the coming weeks” via Ethernity Chain. The platform has a philanthropic edge, allowing NFT creators to earmark an amount between 5% and 95% of the sale price to a chosen charity. Ethernity Chain is a new player in the NFT space, just launching in February with funding from notable blockchain VCs like Black Edge Capital, Morningstar Ventures, and Spark Digital Capital.

Thus far, Ethernity Chain has worked with pop culture artist BossLogic, and it recently announced plans to launch a series of NFTs inspired by boxer Muhammad Ali’s 1971 “Fight of the Century” against Joe Frazier. Proceeds from the Ali sale will benefit the nonprofit Muhammad Ali Center museum in Louisville, Kentucky.

No further details about the Tony Hawk sale have been released, including precise timing, the form or style of NFTs, or the number of designs or editions available for purchase. Decrypt has reached out to Ethernity Chain for further details on the incoming drop.

NFTs have quickly proven to be a cash cow for digital sports collectables. Dapper Labs’ NBA Top Shot collectibles platform on the Flow blockchain has generated nearly $322 million in trading volume in the last 30 days alone, according to DappRadar, with a single LeBron James NFT “moment” selling for $208,000 in late January. Ethereum-based fantasy soccer game Sorare saw the sale of a digital Cristiano Ronaldo card for nearly $290,000 last weekend.

Athletes have been striking out on their own with NFT drops, as well. NFL star Rob Gronkowski pulled in a cool $1.6 million over the weekend from a series of NFT collectible cards, while a still-ongoing sale of artwork inspired by quarterback Patrick Mahomes is currently in the millions.

In addition to athletes, celebrities and brands alike—including Grimes, Taco Bell, and Charmin— are aiming to get a piece of the booming NFT market; the top three marketplaces saw $342 million in total trading volume in February alone.

Even The Hawkman plans to swoop in and claim his prize.

What do the Great Commission and plas…
Theatre Tickets Direct – Frozen The M…
Tony Rock Goes Off On Will Smith & Ja…
How to Bridge BNB to ETH – An Easy St…
Van Dyke Beard Style: 3 Trendy Looks …


This post first appeared on Passive Income With NFTs, please read the originial post: here
People also like
What do the Great Commission and plastics have in common?
Theatre Tickets Direct – Frozen The Musical
Tony Rock Goes Off On Will Smith & Jada Pinkett At Comedy Show
How to Bridge BNB to ETH – An Easy Step by Step Guide
Van Dyke Beard Style: 3 Trendy Looks & How to Get Them
Advisors' Creative Solutions for Getting their Clients Tested Before Travel
Best homebrew games for your A500 Mini
How Real Estate Companies Are Growing With Blockchain Technology?

Tony Hawk to Ollie Into World of Collectible NFTs