Travel Time: My Day of Valor in Laguna, Philippines 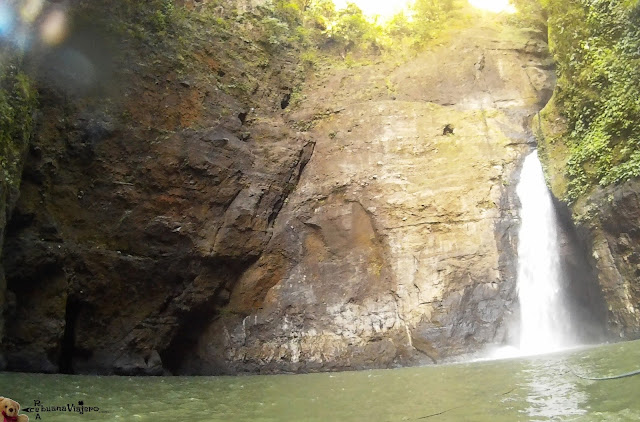 I have been traveling from Cebu to Manila for quite sometime already.
This time, to find an escape from the stresses of work and to find a way to enjoy life for being young for adventure, I booked a ticket to Manila once again but my destination was at Laguna!
Yes, Laguna is popular for the Laguna de Bay, waterfalls, and hot springs as well. Honestly speaking, I did not have an idea as to the place and just heard of the recent trend "Hulugan" falls and the others.

So, there I was, I immediately booked a ticket since they were on a promo fare. But later bought another ticket at an earlier date and with a better airline. The cost are the same with the luxury and budget airlines, so I chose the former.
As I had booked the tickets for like around six (6) months earlier, I had enough time to look for places I wanted to explore and properly set the budget as it was a total Do-It-Yourself (DIY) experience for me and I had enough time to save money for this nerve-wracking experience.
One thing that helped me at that time was, my mom was staying in Laguna for a while for a business trip and I was able to stay in the same hotel in Calamba, Laguna though it is quite far from the other areas for sight seeing.
However, I realized that there were advantages in staying far from the destination place. One is that I became familiar with jeepney routes and traffic, which was the worst thing I have experienced in my lifetime as of now, and the distance of the places.

My first day was nice, I had a flight wherein I met the sunrise in Manila when the plane landed. Arrived at the Terminal 1 which was really not familiar for me. I had no idea that the white taxis or the GrabTaxis will pick up the passenger on the second floor. I asked the guards but they did not tell me about it. I was on the ground floor waiting for the GrabTaxi I had booked to arrive but unfortunately he ended up cancelling it and I did not even see where he was.
Well, I went out and asked the GrabTaxi representative in a stall. Luckily, an orange Toyota Vios came and just took the GrabCar category of their company. That was my first time to use that category. The price was a bit higher than usual taxi, even Grab, but it was okay, I wanted to be out of the airport already.
It was such a pleasing experience, the car was new, the taxi driver was cool. We talked about the upcoming presidential elections. There were really few cars during that day as it was a holiday. It was on April 9 (Day of Valor)
Seriously, I could not even fathom it was Manila (sarcasm). 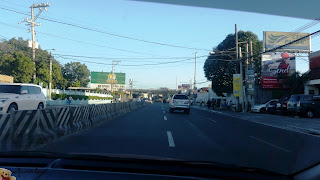 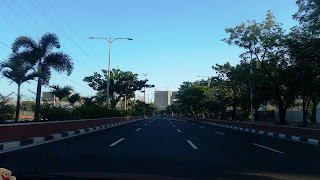 I then took a bus that would go to Calamba, Laguna. Used the GPS of course.
What surprised me though was the heavy traffic from Manila to Laguna. Good thing was that I was riding an airconditioned bus helped me to bear the heat.

My problem was when the bus can only stop at the crossing area. I had to look for a jeepney that would send me to the hotel. I had no idea what to ride and had to ride a route that took me around. Fortunately, I only brought a backpack, a sling bag, and a beltbag for my four (4) days and three (3) nights trip.
But then again, the jeepney traveled a lot of places and almost gave me a tour in Calamba and took me more or less thirty (30) minutes instead of five (5) to ten (10) minutes. 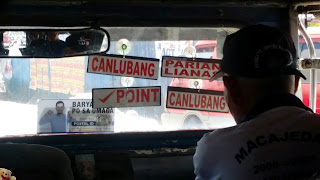 At first I thought that Checkpoint means its a place where police will check each driver's identity, later I realized it's a name of a mall in the intersection going to crossing, which is another place.
To summarize, I arrived in Manila at 6AM and arrived at the hotel at 10AM.
The long travel made me so tired to do any activity early morning. I wanted to go ahead on my first waterfall chase, but since I was tired, I had to take a break and slept in.

Later, I finally decided on going to Pagsanjan falls. Searched for a contact number in the internet and asked for details if we would be able to reach the falls in time before the closing hours.
Calamba was around 2 hours away from Pagsanjan/Cavinti/Magdapio falls. 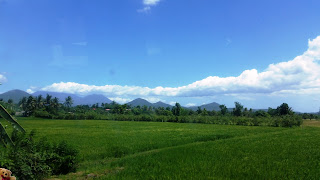 I am actually confused because the falls is mainly called Pagsanjan falls, but when we arrived it had a different name written in the tarpaulin. Later I found out it is popularly known as Pagsanjan Falls, but locals call it Magdapio falls, and it is located in a town called Cavinti.
This may confuse you, but these three names are all just the same falls. 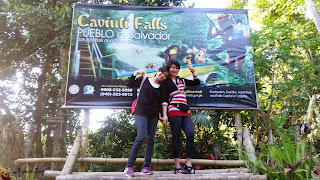 We went there using a bus from Calamba to Sta. Cruz Laguna which costs around 50 to 100 php per person. While we rode a jeepney from Sta. Cruz to Cavinti for 20 php per person. The tour guide I had contacted, the one who booked us a slot to enjoy the falls, called for a tricycle for us which was really thoughtful of him. I gave him extra charge too including the tricycle fare for that. 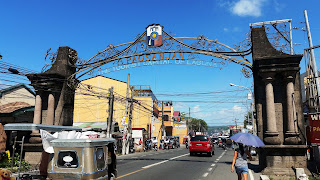 My mom and I arrived a few minutes after three o'clock, no more boats and bankeros available, so we have to walk through our way up and down the mountain to reach the falls, which I initially wanted to do. Riding a boat or a canoe costs around 2k php per person. While hiking and trekking a bit is cheaper like around Php 300 but less than 500 per person. The cost includes life vest, rappelling gears, and a tour guide who will make you enjoy most of it. I wanted adventure too, and my mom wanted to experience it as well. 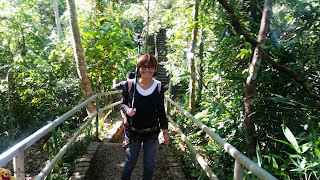 There were two (2) people who came in the last minute, a foreigner and a Filipino from Davao. My mom and I were confidently speaking Bisaya later realizing that the other guest understood everything we were talking about. Lucky we did not back bite them.

The journey seems to be endless. A lot of land pathways, with tree roots visibly seen in the ground, lush green leaves from trees and bushes welcoming us. And the sound illusion of the falls, it sounded near yet still far. 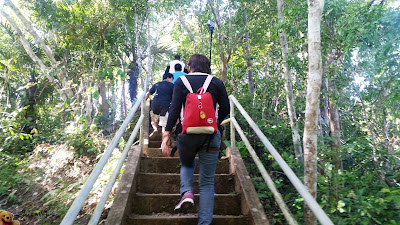 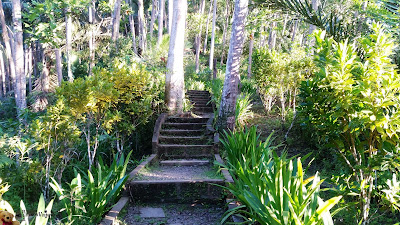 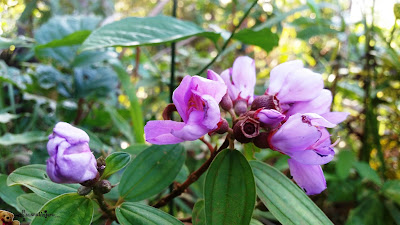 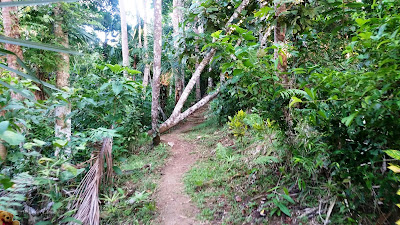 And the descending by rappelling. I was not scared, or so I thought but I ended up screaming.
I only had to hold on to the rope in front of me and trust that the guide will properly grip my rope as I was going down. I would be confident and brave enough if I would go down by myself by holding into the railings, but they do not allow so I had to fall 30 meters and more. There were two rappelling areas. Oh! We had to go back up with those, apparently the guide would not pull the rope for me, this time, I really had to climb.

After all that struggle, we found ourselves in front of the majestic falls making loud noises as it announces its grandiose. How humble it looks as it is surrounded by cliffs, yet struggling to make every man on Earth know its existence. Yes, I acknowledge you are indeed great. 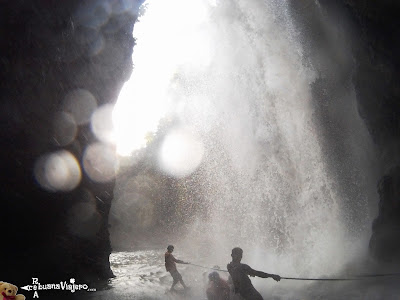 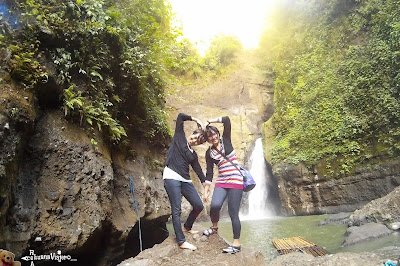 Now, we have to go back as it was getting dark already.
The bad thing was that, I did bring a waterproof bag, waterproof camera, but no extra clothes for us. We were soaking wet. By the way, the place rarely has jeepney available. It will take time and they are mostly full. Good thing, since it was just me and my mom, we were able to ride a jeepney earlier than the group who had waited before us. First come first serve, so we just have to be fast and quick to get to the jeepney.

We arrived at Sta. Cruz at 6pm in the bus terminal where the bus would go to Pasay or at least pass thru Calamba crossing. It was an aircon bus, we seated behind the driver. The bad thing started, we were stuck in Los Banos for almost 5 hours due to heavy traffic. I had been wanting to walk but I feel bad for my mom to be walking again. She was almost getting a fever due to the cold aircon and wet clothes. It was a really bad incident and a lesson learned. We arrived at the hotel quarter to 12, took a bit of shower and dried our bodies, turned the alarm for another hiking in a few hours and fell asleep.
Alarm time: 2:00AM. 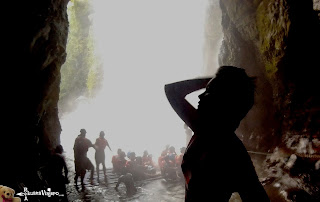 
This post first appeared on 7 TIPS EVERY BUDGET TRAVELER WOULD SURELY APPRECIATE, please read the originial post: here
People also like
8 Things To Think About When Shopping for an Patio Fire Feature
30 Cheap & High ROI Home Renovations (And 5 Costly DIY Mistakes)
11 Ways Real Estate Market Will Change in Nigeria in 2023
The Benefits of Synthetic Epoxy Flooring
The Connection Between Sleep and Fitness
Mastering the Art of Selling Your Own Products
Understand You
Which are the Best Smart Home Automation Apps?
THE ENEMY OF THE UNLIVED MEANINGLESS LIFE
What is accidental life insurance
Christmas Wreath Grinch Front Door

Travel Time: My Day of Valor in Laguna, Philippines