Paleontologists on Thursday unveiled the fossilized remains of an ancient whale that inhabited the seas 36 million Years Ago, found last year in a Peruvian desert. Scientists called the creature a “sea monster” that “surely did a lot of damage.”

WebHosting UK – 50% Discount on Web H…
4 Things To Do To Speed Up The Proces…
MC391952: Microsoft 365 Assessment to…
The Friday Roundup – Editing Workflow…
A Guide To Visiting Antigua, Guatemal…

“We have presented the new Peruvian basilosaurus, it is the complete skull of an archaic whale that lived 36 million years ago,” paleontologist Mario Urbina, head of the team that discovered the skeleton, told AFP. 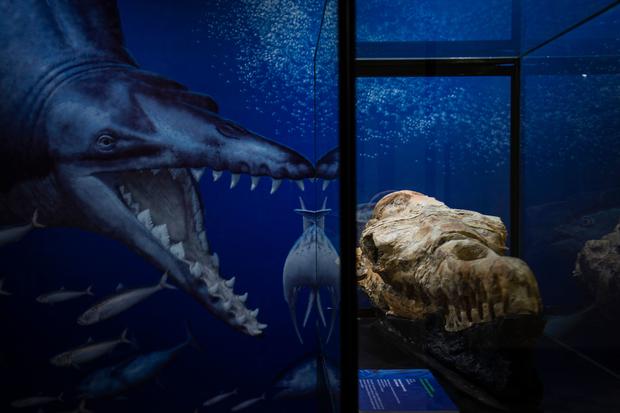 The fossil remains of a Basilosaurus’ skull found in Ocucaje, Peru, are displayed by paleontologists at a museum in Lima, on March 17, 2022. ERNESTO BENAVIDES/AFP via Getty Images

Urbina said the basilosaurus was found at the end of 2021 in the Ocucaje Desert in the Ica department, about 215 miles south of Lima. The desolate landscape was a shallow sea millions of years ago, and its dunes have yielded large numbers of striking primitive sea mammal remains.

Rodolfo Salas, chief of paleontology at Peru’s National University of San Marcos, said that the whale was a “sea monster.”

“The most incredible thing is that the skull is in a very good state of preservation, it has complete teeth; it was a first-order predator, at the top of that time that fed on fish penguins; a sea monster just as they imagine it and we think it is a new species,” Salas said.

The “Ocucaje Predator,” as the researchers dubbed it, was about 55 feet long and used its massive, powerful teeth to feed on tuna, sharks and schools of sardines.

“When it was searching for its food, it surely did a lot of damage,” Salas said, according to the Reuters news agency.

“This finding is very important because there are no other similar specimens discovered in the world,” said Urbina, a researcher at the university.

Team member Rodolfo Salas-Gismondi explained the basilosaurus differs from other known ancient whale species by its size and the development of its teeth, both of which indicate the animal was likely at the top of the food chain.

“This is an extraordinary find because of its great state of preservation,” he told AFP. “This animal was one of the largest predators of its time.”

“At that time the Peruvian sea was warm,” added Salas-Gismondi, who heads the Department of Vertebrate Paleontology at the Natural History Museum in Lima. “Thanks to this type of fossil, we can reconstruct the history of the Peruvian sea.”

The first cetaceans, like the basilosaurus, evolved from land animals some 55 million years ago.

By the late Eocene period (between 56 million and 34 million years ago), cetaceans had fully adapted to marine life.

Whales had not yet evolved, and almost all cetaceans were marine macropredators, according to the research team.

The Ocucaje Desert is rich in fossils, the researchers said, providing scientists with 42 million years’ worth of evolutionary evidence.

Other fossils found there include four-legged dwarf whales, dolphins, sharks and other species from the Miocene period, between 23 million and five million years ago.

The announcement in Peru comes about two months after paleontologists said they had discovered a 180-million-year-old giant “sea dragon” fossil in the United Kingdom.

This post first appeared on Chickens For Sale, please read the originial post: here
People also like
WebHosting UK – 50% Discount on Web Hosting Plans
4 Things To Do To Speed Up The Process Of Building A New Website
MC391952: Microsoft 365 Assessment tool for SharePoint 2013 workflows available now!
The Friday Roundup – Editing Workflows, Cutting Tips and more!
A Guide To Visiting Antigua, Guatemala: The Best 5 Things To Do And See