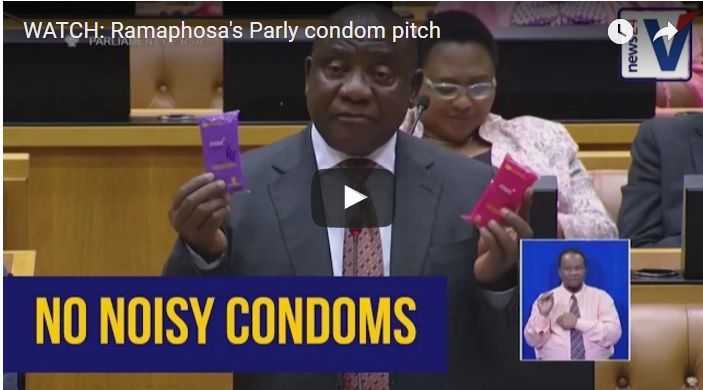 Deputy President Cyril Ramaphosa urged Members of Parliament to help themselves to the new government condoms – designed for maximum pleasure and to make no noise – on Thursday.
Answering questions in the National Assembly, the Deputy President lauded the new Condoms, which were introduced in June.
They were aimed at increasing prevention in the country, Ramaphosa said, as MPs giggled at the description of the Max condoms.
Users had complained that the old condoms did not smell nice, he said.
Moreover, the Choice condoms made a Noise during the act of sex, Ramaphosa told the amused MPs.
Now, he said, they had fixed and improved the formula, bringing in more flavours.
“Now, through scientific development, we were able to develop a new condom, which is called Max. The Max is for maximum pleasure, protection, and it does not make noise at all,” he said.
Not only that, but they now came in different flavours, he said, waving the condoms around the National Assembly.
“If you want a grape flavour, here it is. If you want an apple flavour, you can get an apple flavour.”
When UDM MP Mncedisi Filtane asked who cared to listen to noise “at that moment”, the deputy president answered that they were merely responding to concerns from the users.
“The issue of noise was reported by users. The people who used the old condoms approached the minister of health and said this made noise, so could you make ones that make less noise?
“So members, please help yourself to the condoms, which we expect we can all use for maximum pleasure and protection.”
Source: News24