UFC 250 will take place on July 11 (US time) on UFC Fight Island in Abu Dhabi. Fight Island was first conceived in April in response to the coronavirus pandemic and will see the promotion take top fighters to the exclusive venue for the show. 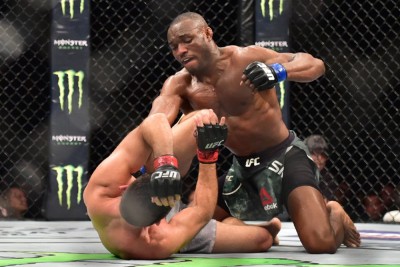 The main fight card will also see UFC veterans Jose Aldo and Paige Vanzant. The main card will feature five fights along with seven more fights in the prelim and early prelim bouts. In all, UFC fight fans will be able to see 12 matches and have plenty of betting opportunities.

The Nigerian Nightmare Usman takes on the challenge of Burns in the octagon at UFC 251. The Welterweight champion is 16-1 in his mixed martial arts career with seven of those victories coming by way of knockout.

Usman’s only MMA loss came in his second-ever fight against Jose Caceres in May 2013. He is on a 15-match unbeaten run and hasn’t lost in the UFC. This will be his second Welterweight title defense since winning the belt against Tyron Woodley at UFC 235.

Burns, on the other hand, has fought 22 times in MMA recording a 19-3 record. He is the No.1 contender to the Welterweight title and is on a six-match winning streak in UFC. One thing to note is four of Burns’ last six matches all went to decisions.

The fighter’s last win came against Woodley at UFC on ESPN as the two combatants headlined the show on May 30. Burns has fought twice since March 2020 which may give him an advantage going into UFC 251. Usman hasn’t competed in the octagon since December 2019 at UFC 245.

Burns has a lot of upside going into this fight. The fact that he has fought twice in the last five months could give him an advantage over the champion. He could be more match ready.

Usman has taken the remarkable step of relocating his training camp in preparation for the fight. On June 24, two and a half weeks before UFC 251, Bloodyelbow.com reported:

“The reigning UFC Welterweight Champion has been a member of Sanford MMA (formerly Blackzilians) for over eight years but will be relocating to Denver, Colorado to train with renowned MMA coach Trevor Wittman, who coaches the likes of Justin Gaethje and Rose Namajunas.”

Another interesting note ahead of the title fight is that Usman and Burns were both members of the Sanford MMA camp. Burns has already commented on the “weirdness” of fighting his former teammate and friend at UFC 251.

It is really hard to pick a winner for the title fight. Burns has a lot to prove, but the change in training and coaches could help Usman. Burns has seen four of his last six matches end with a decision. Four of Usman’s last five matches have been by unanimous decision as well. Although I like Usman for this fight, Burns has everything to gain. Still, the Nigerian Nightmare will put some fright into Burns and win by unanimous decision.