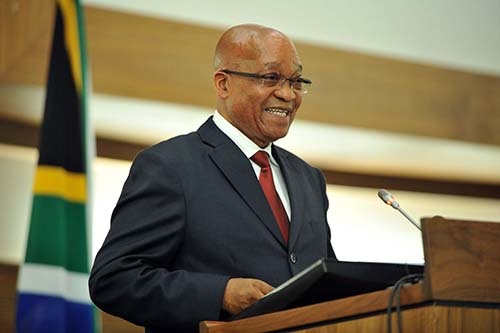 Ventersdorp – President Jacob Zuma bandied about some of the bard’s most famous lines from Julius Caesar and Macbeth during an address to young people in Ventersdorp on Friday.
“You know, if I tell people I never went to school, they don’t believe it!” said Zuma in sharing his story of forging an education for himself despite limited opportunities.

Top Things to Do in San Francisco, Ca…
'Kroos messaged me at 4 am': Casemiro…
After the FBI raid at Mar-a-Lago, onl…
“Not a single teacher in South Africa can claim he ever saw this forehead of mine in his/her class. Never!” he declared, chuckling.
“I never went to school because I had problems, but I took a decision to educate myself.”
Zuma suggested that he was not intimidated by those who received a formal education. “Tell me today, you are educated, I don’t care. I am not worried,” he said.
The relaxed-looking president, dressed in a dark suit and red polka-dot tie, said that because he studied for “knowledge, not for the examination,” he retains all his information.
He then offered to quote Shakespeare “to prove the point”.
Taking suggestions from the crowd, Zuma then delivered an extract from Mark Antony’s funeral oration from Julius Caesar, a play known for its commentary on political betrayal.
“I have come here to bury Caesar, not to praise him,” quoted the President with gravitas, to the cheers of the crowd.
Revelling in the recital, Zuma then switched to another work and gave a brief synopsis of some of the key events that led up to the power-hungry Macbeth’s downfall.
“Macbeth was told by a soothsayer that no one man born of a woman can kill him unless the Birnam Wood moved…. And what happened?
“In some mysterious situation, he was told the Birnam Wood is moving, and he knew that was the end of him because the enemy had taken cover there… [They] took the branches as camouflage. As they moved out they looked like the whole wood was moving…
“While he was in trouble, someone comes and tells him that the wife has just died. What does he say in the soliloquy?”
Zuma then proceeded to deliver Macbeth’s lines word perfectly: “She should have died hereafter. There would have been a time for such a word. Tomorrow and tomorrow and tomorrow…”
Zuma’s reading problem
In 2013, political analyst Richard Calland criticised the president’s reading habits or alleged lack thereof, suggesting: “It’s not that he can’t read, it’s that he doesn’t read and he doesn’t read the proper stuff; he doesn’t read Cabinet briefs, he doesn’t read stuff that is the meat and drink of modern, sophisticated government,” Calland told the Cape Town Press Club in September of that year.
“It is not easy for one to have such disrespect for our president. The truth is we have a leader who encourages that … and who is, in many ways, the embodiment of anti-intellectualism.”
On Friday, leaving lines from the iconic playwright behind, Zuma nevertheless continued on his poetic bend in inspiring the youth to put education first.
“I wish I was still a youth,” he said.
“In this freedom, I would be everything – I would even have the wings to fly…”
He said that new opportunities after apartheid meant local scientists could now go to the moon.
“You must always want to jump and catch the moon…”
While Zuma did not complete formal schooling, independently, he pursued learning.
His official biography on the ANC website describes, in particular, his years of imprisonment on Robben Island as a time which “taught president Zuma and many of his peers many things about our country and struggle. It became a university in the true sense of the word.”
Role models
Earlier during Friday’s address, Zuma introduced a number of young people attending the ceremony who were being honoured for achievements. One was a woman Zuma reassured the crowd who was, despite her apparently youthful appearance, “a qualified doctor”.
Another was a young man who had invented items including an electronic vuvuzela and automatic shoe polisher.
Zuma also made mention of the need for physical wellbeing for the youth.
“You can be a young person but have the body of an old person because you are not exercising and you are going to get sick.”
During his speech, Zuma commented on the court case involving the death of 16-year-old Matlhomola Mosweu, who died after allegedly being caught stealing sunflowers in Coligny.
According to allegations, the boy broke his neck while jumping off a moving bakkie.
Two farm workers were arrested for the death and subsequently released on bail. Outraged residents burned homes and looted shops in the town.
“The town of Coligny here in North West lost a young person… who was brutally murdered,” Zuma said.
“The circumstances of this murder will be determined by the courts and we should allow the law to take its course.”
Zuma urged that the death “should unite the people of Coligny in the determination to defeat racism”.
Youth Day marks the anniversary of protest action on this date in 1976 by black schoolchildren against the oppressive Bantu education. The demonstrations were marked by police brutality and violence against the youth.


This post first appeared on The Edge Search, please read the originial post: here
People also like
Top Things to Do in San Francisco, California
'Kroos messaged me at 4 am': Casemiro reveals he decided to leave Madrid after Champions League final
After the FBI raid at Mar-a-Lago, online threats quickly turn into real-world violence