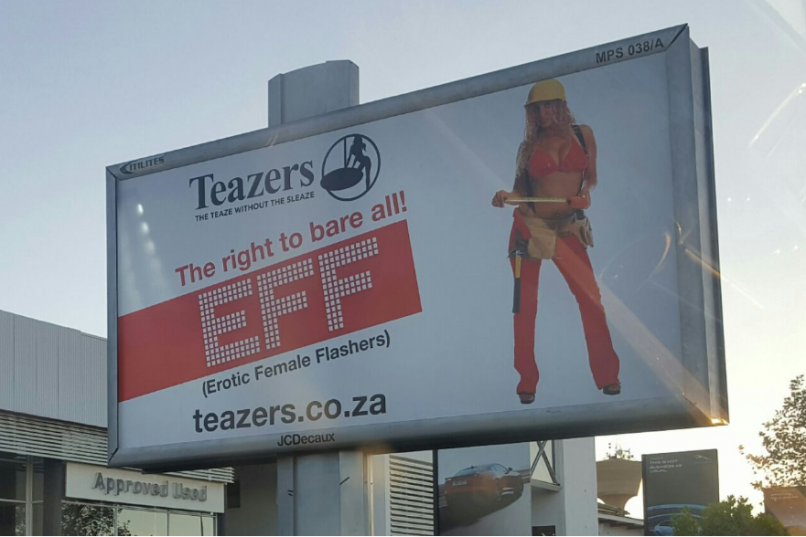 Now we know who the real pimps and Brothel Owners are, says Sushi King Kenny Kunene.

A Teazers strip club billboard has been erected next to a car dealership in Joburg and, from a distance, one could easily mistake it for an Economic Freedom Fighters (EFF) billboard. The stripper posing on the billboard can be seen in red overall pants and a bra, with a yellow helmet.
“The right to bare all” is the Teazers slogan in red letters. The strip club has long been known for its provocative billboards, which often poke fun at politics and use what we can only assume the owners of Teazers think is clever wordplay.
Also highlighted on the billboard with a red background is “EFF” which apparently stands for “Erotic Female Flashers”.
The billboard was spotted by sushi king, businessman and former EFF member Kenny Kunene, who took a picture and shared it on Twitter, writing: “I think this is the best description…now we know are the pimps n real brothel owners [sic].”
Kunene has previously criticised the EFF leader for being a “gossiper” who shares secrets with anyone who’s listening. 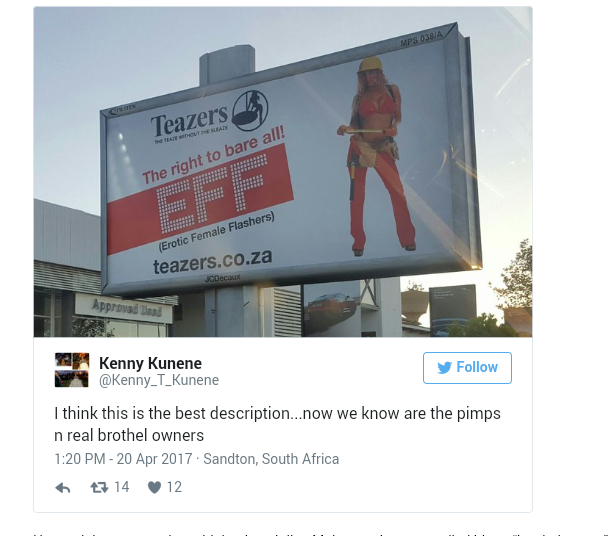 He used the opportunity to hit back at Julius Malema, who once called him a “brothel owner”.


During his speech at the KwaZulu-Natal PGA in Durban in October last year, Malema slammed Kunene and said he had no time for “brothel owners”.

“I hear even the people who are owning brothels now they go to TV and say ‘Malema sold out’. I’m the best debater in South Africa, I don’t debate with brothel owners, I debate with serious politicians. They are looking at us, we’re cruising nicely, they are hurting. Wa swa moloyi (the witch is burning). Everytime you open your mouth, ‘Julius this, Julius that.’

“Why is that? It’s because Julius is hitting where it matters most,” he said at the time.

Malema was responding to Kunene’s interview on SABC2’s breakfast show, Morning Live, in which he had called the EFF leader a “Judas”, saying he had gone to London and sold out.

Kunene further challenged Malema to a debate. However, the debate did not happen, as the EFF leader said he did not have time for the sushi king.