With Daw Aung San Suu Kyi visiting the US this week I'm compelled so much to write about her that I can no longer put off posting about Myanmar. (Currently, it's pretty hard for me to look back at my pictures from Myanmar.) 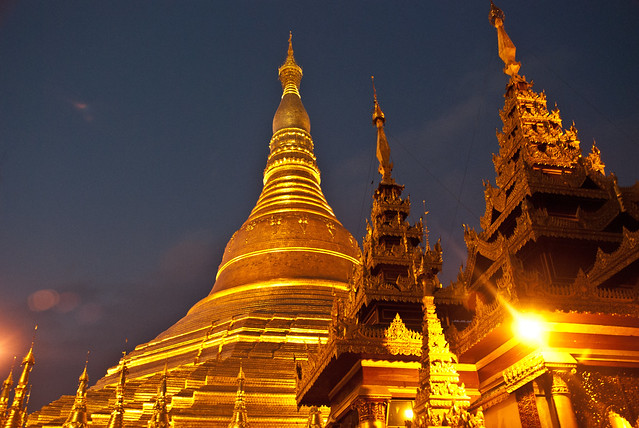 The powerful Shwedagon Pagoda at dusk.
She's a personal hero of mine, a woman who has exhibited unrelenting and almost stronger than human resilience as an icon for democracy for her country and around the world. She's an image of elegance and beauty and has maintained her lifelong commitment to progress in her country despite decades of house arrest, separation from her loved ones, and isolation from the outside world.

When we arrived in Myanmar in January 2011, it was less than 2 months after Daw Suu (Auntie Suu) was released from house arrest. President Thein Sein took over as president and Myanmar started on this unprecedented journey of change by reconvening Parliament after decades and by giving minority groups a role in government that few could believe. Daw Suu slowly emerged from her years of imprisonment in her home, and I sat on the edge of seats in quite a few closed rooms speaking in hushed tones and understood code words with local friends about her first meetings with the new President and her start at making public appearances. 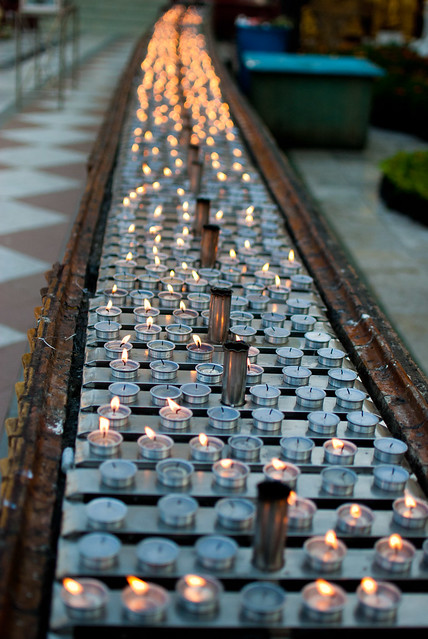 Candles lit at Shwedagon.
In early 2011, locals still would not display photos of the Lady in public nor speak her name fully in a tea shop. She was an off limits topic. I once had a man on a bus across the aisle from me reach for his necklace under his shirt and making eye contact with me, show me her photo. He quickly replaced it back under his shirt, and I sat stone faced, delighted and in awe, not wanting to react. Always, I had to maintain an appearance of neutrality. 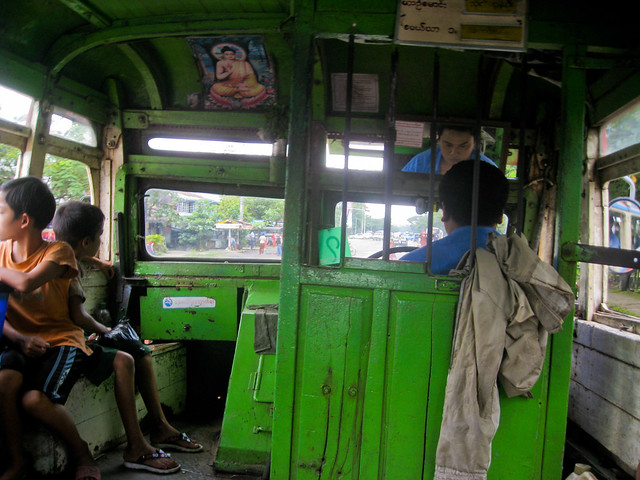 Riding one of the older buses in Yangon.
I would never show or express in public my disapproval or shock or opinion related to any sensitive issues, including politics amongst many topics. Hiding emotion or opinion is common in many Asian countries, but no where was it as prevalent as living in Myanmar, a transitioning democratic nation. And I'd have lengthy conversations with my volunteers about the risks these conversations could have for locals or for themselves while teaching in the country. There were plenty of examples of foreigners getting deported and locals facing negative consequences for saying or doing the wrong thing.


Months later, in July, the Lady made one of her first big public appearances to mark the anniversary of her father's assassination by visiting his memorial site. I stayed away, despite my inclination to see her. Friends that attended were photographed repeatedly and intimidated by people "in charge of watching". I avoided every event where I could see Daw Suu and went about my work. I did my best to blend in, sometimes tough as one of the foreigners living in my neighborhood. 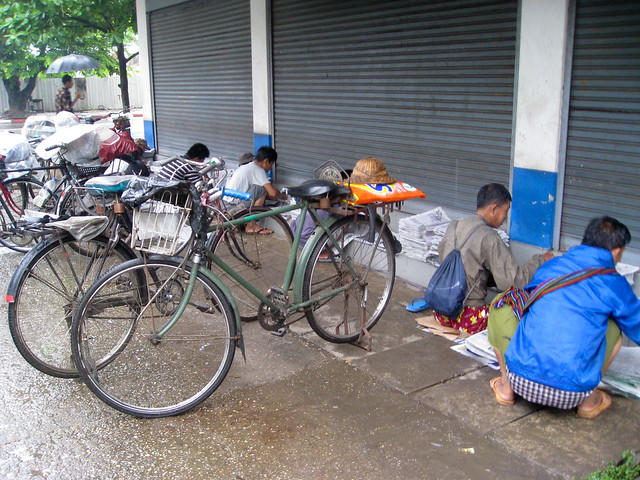 Delivery men folding newspapers on a rainy day in downtown Yangon.
Later that year, I watched stunned as Daw Suu's photos appeared on the cover of newspapers. They'd quickly sell out. Internet censorship lifted quickly, allowing the use of YouTube and non-government run news sources. Daw Suu began her political campaign and after much concern over her safety traveling around the country (based on historical incidents), she did in fact travel, and every where she went, she drew crowds of hundreds and tens of thousands of loyal followers. Emotions ran high. An excitement buzzed through Yangon and all of Myanmar. They were no longer whispers, people yelled her name, wore her photo, followed her every move, and hugged her every chance they had.

Campaigning for Parliament, the energy for Daw Suu was palpable. Her party's red flag with a yellow fighting peacock appeared in more places than I could have imagined. A people formerly intimidated to speak her name in public were now brave enough to display flags on their cars, from apartment windows, and unbelievably on their shirts. Despite the shifts, I still feared for them, and I still walked by t-shirt and key chain stands not wanting to be seen buying anything myself.

Once she was elected, and actually took office, a calm settled over the people. There had been victory. Their leader was allowed to lead. The cities I frequented for work suddenly felt different. People seemed to stand taller, speak a bit more openly, and certainly hoped a bit more for the future. Myanmar was a different place now. The international media was allowed in to watch. The world as their witness, Myanmar had changed. 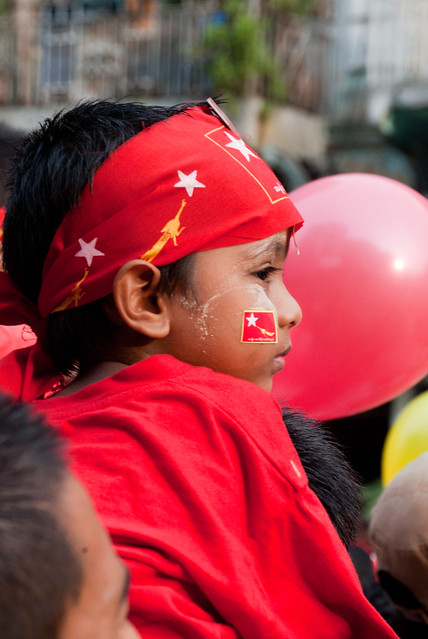 A new sight in Myanmar, people proudly wearing the flag of the democratic party.
As Kyle and I neared the end of our time in Myanmar in mid 2012, I still avoided political events but finally bought a few key chains of Daw Suu to give to friends in Thailand. Even on April 1st as hundreds celebrated outside her campaign headquarters in Yangon, Kyle and I stayed low key and away from the events. I'd assumed I'd leave Myanmar without seeing her.

Our Last Chance to See Her

Just one week before we left Yangon, May 25, we heard rumors that her Party the National League for Democracy was opening a new office down the street from our apartment, and that Daw Suu would come to speak. There were often rumors of her coming to events where she didn't show up, so we weren't holding our breath, but as we walked out of my office in downtown Yangon, we thought we'd try our luck. As we walked over, people filled the streets waving the party's flag and wearing head scarves and stickers. 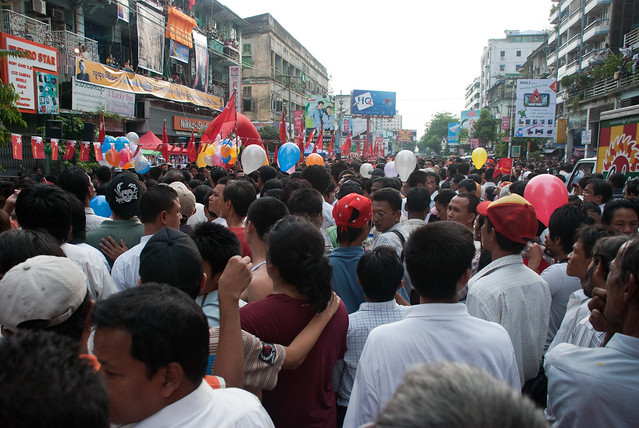 Waiting for Daw Suu to arrive - cars still trying to pass through the crowds. 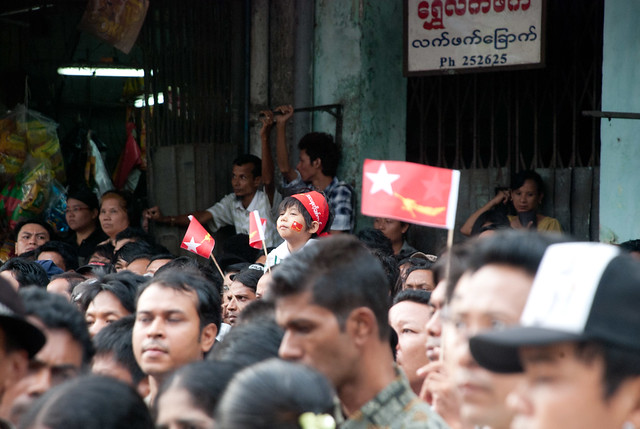 Faces and NLD flags in the crowd. 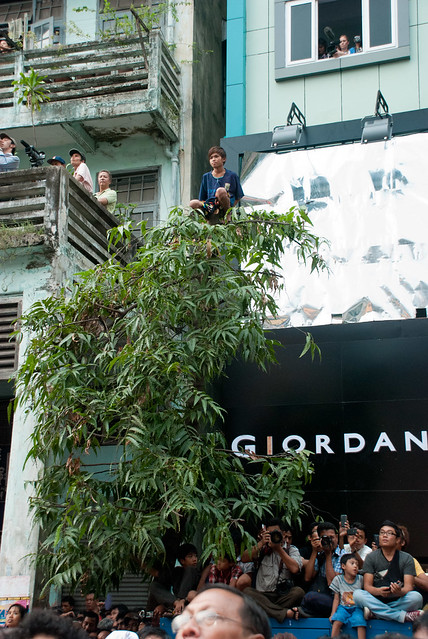 A boy sitting atop a tree to get a better view. 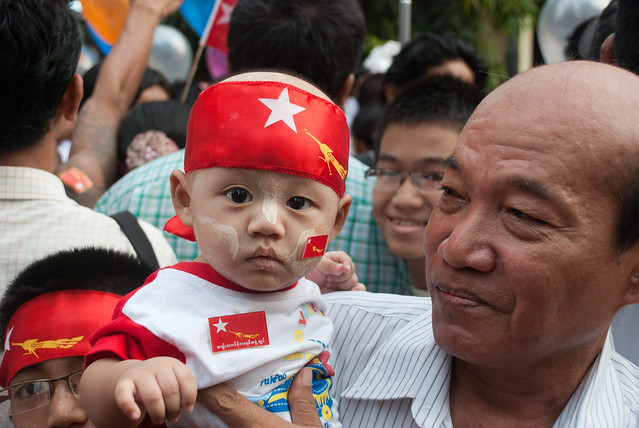 Don't you just want to pinch his cute little thanaka covered cheeks?
We waited a few hours as the sun set, the crowd growing more and more excited anticipating her arrival. People cheered, waved flags, and bounced their babies. Grateful, it seemed to me, that they could be in the streets this way. Excited that they too, along with their loyal countrymen, would have the chance to hear her speak. 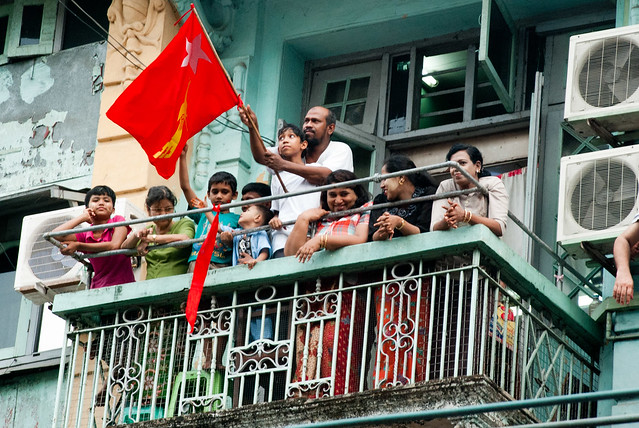 Father and sun waving the flag of the National League for Democracy (NLD). 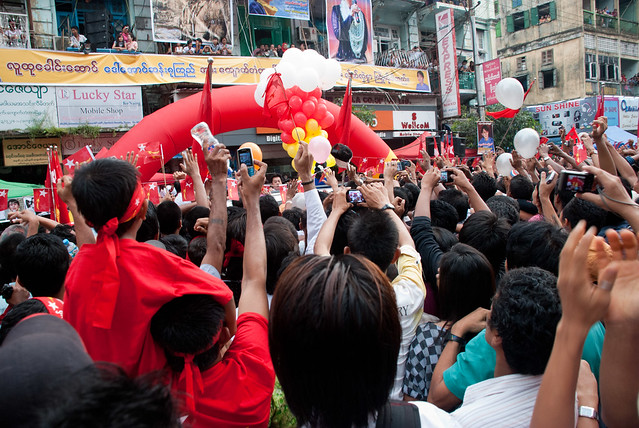 Cameras go up as the Lady arrives standing through the sun roof of a car.
As the motorcade pulled up, I wasn't the only one with tears in my eyes and a smile on my face. Petite, and yet larger than life, Daw Suu, was a person people looked to and depended on for hope. Cameras went up in the air, and arms waved to the Daw Suu in royal blue, with white flowers in her hair. Dozens of balloons flew up into the air, signaling she'd arrived. Confetti fluttered into the crowd. 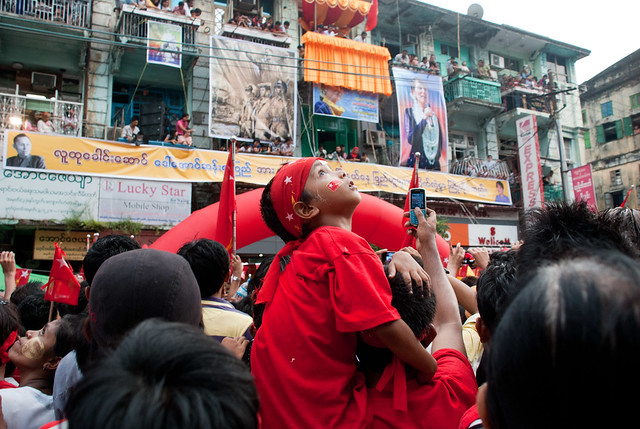 Watching the balloons fly as Daw Suu arrives.
As she spoke from the 3rd floor balcony, the crowd looked on sometimes laughing, sometimes serious, and sometimes echoing her words with excitement. Kyle would lean over, and say " she said newspaper... election... father..." Despite our lack of comprehension, her presence and the energy of the crowd is a memory I'll hold with me a long time. 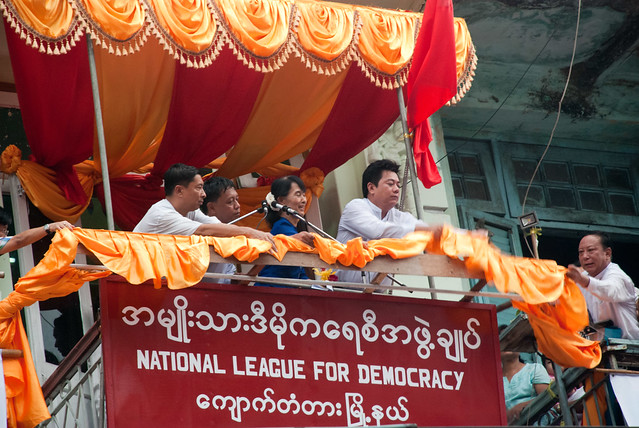 As she began to speak, she realized some people couldn't see her around the fabric, and enthusiastically got it out of people's view. 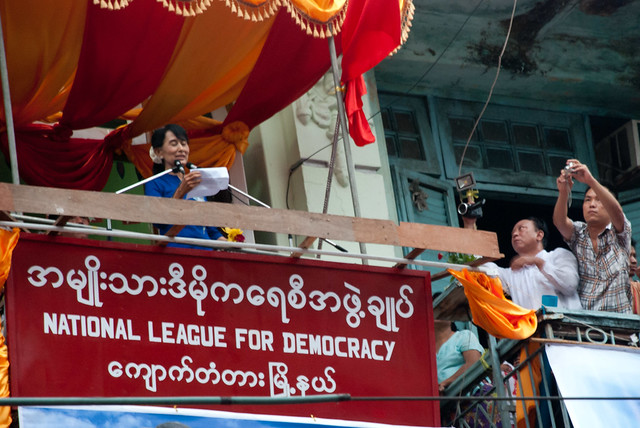 Speaking to her eager crowd, most of whom it's their first time seeing her. 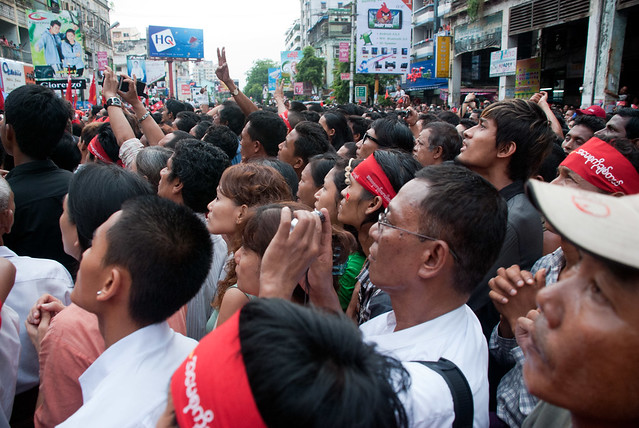 An attentive audience listening to Daw Suu and offering two fingers for peace. 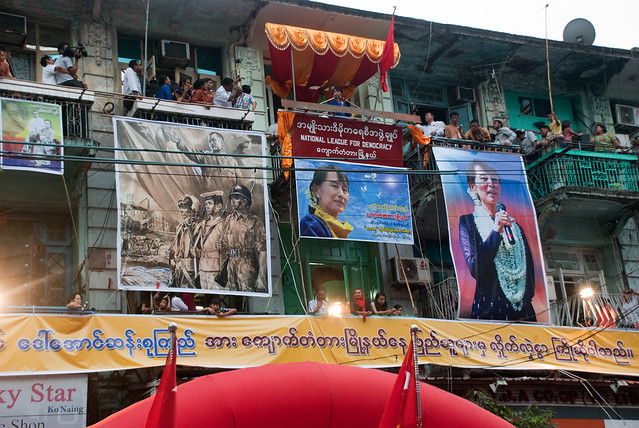 Surrounded by images of her self and a family portrait with her father at the new NLD office on Mahabandoola Rd in downtown Yangon. A simple "stage" for a Nobel Peace Prize winner that's greeted warmly by heads of state around the world.

This is one of my many vivid memories from Yangon. It's one of hundreds that at least when I share them, it makes it seem less far away, that I was there, and a it's a place I can and will return to.