What is a Geyser? | Geyser Pictures & Video What is a Geyser?

A geyser is a vent in Earth’s surface that periodically ejects a column of hot water and steam. Even a small geyser is an amazing phenomenon; however, some Geysers have eruptions that blast thousands
of gallons of boiling-hot water up to a few hundred feet in the air.

Old Faithful is the world’s best-known geyser. It is located in Yellowstone National Park (USA). Old Faithful erupts every 60 to 90 minutes and blasts a few thousand gallons of boiling-hot water
between 100 and 200 feet into the air.

Conditions Required for a Geyser

Geysers are extremely rare features. They occur only where there is a coincidence of unusual conditions. Worldwide there are only about 1000 geysers, and most of those are located in Yellowstone National Park (USA). 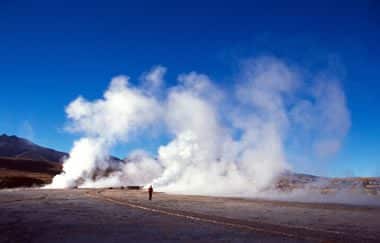 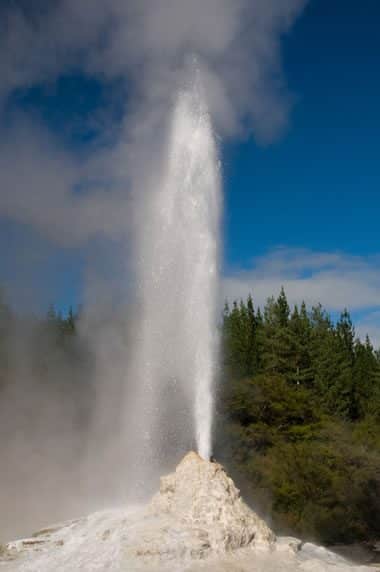 Where are Geysers Found?

Most of the world’s geysers occur in just five countries: 1) the United States, 2) Russia, 3) Chile, 4) New Zealand, and 5) Iceland. All of these locations are where there is geologically recent volcanic activity and a source of hot rock below. 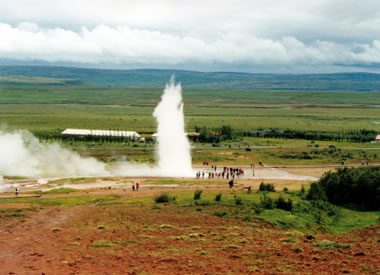 Strokkur Geyser is one of Iceland’s most famous. It erupts to heights of seventy feet every ten to twenty minutes. Image copyright iStockphoto / Tetra2000.

Yellowstone’s Old Faithful: YouTube video of Old Faithful Geyser in eruption at Yellowstone National Park. Note how many people are present to witness the eruption!

Iceland’s “Strokkur Geysir”: YouTube video of Iceland’s Strokkur Geyser in eruption. Strokkur erupts to heights of up to 70 feet about every 10 to 20 minutes. 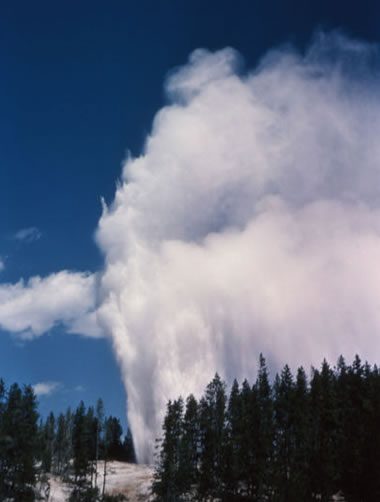 How Often Do Geysers Erupt?

Most geysers erupt irregularly and infrequently. However, a few are known for regular eruptions. The most famous, named “Old Faithful” in recognition of its regular eruptions, is located in Yellowstone National Park (USA) and erupts about every 60 to 90 minutes. More details on the eruption intervals of Yellowstone geysers are given in the table below. 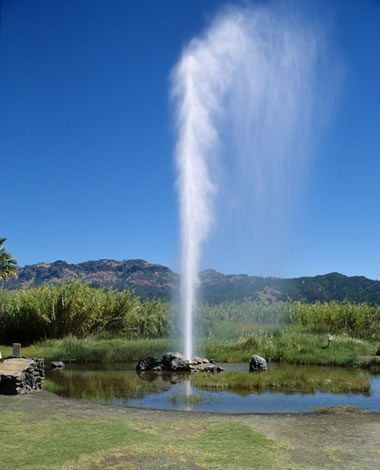 California’s Old Faithful: The United States has two “Old Faithful” geysers, both of which produce predictable eruptions. This one is near Calistoga, California. Image copyright iStockphoto / Stephan Hoerold.

Old Faithful Geyser was named in the late 1800s when people observed that it erupted on a predictable schedule. Its eruption schedule has changed little since the name was given.

However, the geyser might not have erupted at all during parts of the 13th and 14th centuries. This was discovered after pieces of mineralized wood were found embedded in Old Faithful’s geyser mound. Trees do not grow on active geyser mounds, so the wood indicated a period of geyser inactivity. The wood was dated by the United States Geological Survey to have lived between 1233 and 1362 CE.

Tree-ring records of the Yellowstone area reveal a severe drought during the 13th and 14th centuries. This suggests that gaps in Old Faithful’s eruption history were caused by drought. [1] 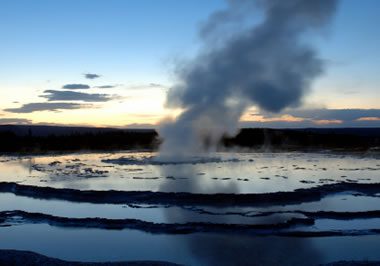 Which Geyser is the World’s Largest?

The tallest active geyser in the world is Steamboat Geyser in Yellowstone National Park. Some of its eruptions blast water as high as 400 feet into the air. Steamboat Geyser has been extremely active since 2018, with only days between eruptions (rather than years). If you want to see the world’s tallest geyser in action, there has never been a better time to visit Yellowstone!

Waimangu Geyser in New Zealand used to be the tallest geyser in the world. Its eruptions were spectacular, blasting jets of water up to 1600 feet in the air. Unfortunately, a landslide altered the hydrology around Waimangu, and it has not erupted since 1902.

How Do Geysers Work?

To understand how a geyser works, you must first understand the relationship between water and steam. Steam is a gaseous form of water. Steam is produced when water is heated to its boiling point. When water converts into steam at surface conditions, it undergoes an enormous expansion because steam occupies 1600 times as much space as the original volume of water. The eruption of a geyser is powered by a “steam explosion” when boiling-hot water suddenly expands into the much more voluminous steam.

To summarize: a geyser erupts when superheated groundwater, confined at depth, becomes hot enough to blast its way to the surface.

Here’s what happens in the ground…

Cool groundwater near the surface percolates down into the earth. As it approaches a heat source below, such as a hot magma chamber, it is steadily heated towards its boiling point. However, at the boiling point the water does not convert into steam. This is because it is deep below the ground, and the weight of cooler water above produces a high confining pressure. This condition is known as “superheated” – the water is hot enough to become steam – it wants to become steam – but it is unable to expand because of the high confining pressure.

At some point the deep water becomes hot enough, or the confining pressure is reduced, and the frustrated water explodes into steam in an enormous expansion of volume. This “steam explosion” blasts the confining water out of the vent as a geyser.

The “Valley of Geysers”, located on the Kamchatka Peninsula of far eastern Russia, is the world’s second-largest concentration of geysers. It is located in one of the most volcanically active areas of the world, and nearby volcanoes serve as a heat source for the geyser activity.

The Valley of Geysers originally had nearly 100 geysers and dozens of hot springs, in a valley less than four miles long (6.4 kilometers). It is part of the UNESCO “Volcanoes of Kamchatka” World Heritage site. The geysers and thermal features of this spectacular area have been poorly studied because the southern end of the Kamchatka Peninsula is so remote and hard to access. Very few people have been there to see the geysers.

Unfortunately, on June 3, 2007, a large mudflow overran about half of the valley, covering many of the geysers, hot springs, thermal pools, and waterfalls. Debris from the landslide blocked the flow of the Geysernaya River. A thermal lake, fed by the flow of hot springs from nearby volcanoes, is now located on the upstream side of the landslide dam. 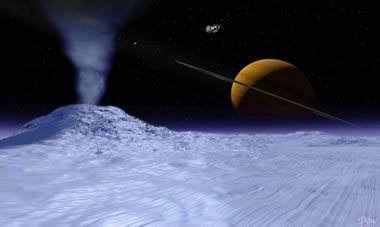 Are There Geysers on Other Planets?

So far, geysers have not been discovered on other planets; however, geyser-like activity has been documented on some of the moons in our solar system. Jupiter’s moon, Io, has eruptions of frozen water particles and other gases through vents in its surface. Triton, a moon of Neptune, and Enceladus, a moon of Saturn, also have these cold geysers sometimes called “cryovolcanoes.” They are thought to erupt from pools of liquid water located a short distance below the surface of these moons. On the surface the eruptions are like a “volcanic snow.” Please visit our article about Eruptions in Our Solar System.

The post What is a Geyser? | Geyser Pictures & Video appeared first on GulpMatrix.

What is a Geyser? | Geyser Pictures & Video