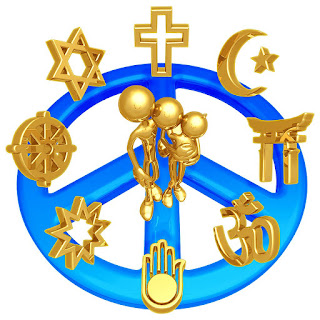 I think the silent majority know that when scriptural texts are literally interpreted and politicized, it breeds unbridled violence, terror and war. This is true across all religions. This is the reason for what Albert Einstein said is so true:

How To Become God's Battle Axe
Sex on Your Period – Reasons to Do It
Holiday Cards – A Brief History
On Death and Subculture
Thor, the archetype of the epic hero …
"The religion of the future will be a cosmic religion. It should transcend personal God and avoid dogma and theology. Covering both the natural and the Spiritual, it should be based on a religious sense arising from the experience of all things natural and spiritual as a meaningful unity."
There are two main reasons why religion is failing to meet its true purpose as an enabler of harmony in the world today. The saying of the original spiritual masters have been first written down as scriptures or sacred texts (Vedas, Torah, Biblical texts and Koran) which were trying their best to put down mystical inner experiential revelations in the best available language which had its cultural limitations.
In the course of time a set of teachers who had no spiritual inheritance from the Masters, through sheer proximity to the power centres of the time, claimed to be the authority for promulgating the teachings they claimed to have inherited.
They transformed the sacred messages into a set of dogmas, diktats and laws to suit their own private agenda and to ensure organizational sustainability of the religious power centres, they demanded strict control and subjugated their followers to stringent confirmation through societal laws promulgated as of Divine origin (such as the Manusmriti, Talmud, the Dogmas and the Canon Law of Christianity and the Sharia Law and corresponding strict adherence to rites and rituals).
There is a common element in both religious fundamentalism as well as In the operating agenda of terrorism. This is the element of fear. In monotheistic religion it is the reward or punishment through metaphysical realms like heaven and hell. In terrorism, it is the constant fear of death, destruction and disruption of social harmony through an element of surprise.
The other reason why this disconnect between spirituality and religion is increasingly happening is due to the fact that all sacred events and their corresponding meanings, which were scripted in a mythological context, are increasingly fitted into a historical context under a misunderstood concept that a historical perspective would render an unquestionable authenticity while they are meant to be interpreted in a spiritual and esoteric manner as revealed to individuals through their own inner experience. This is what the ancient Vedic sages, the Kabbalistic mystics, early desert fathers in Christianity, the later Benedictine, Capuchin and Franciscan and Sufi mystics went through and wrote and preached, but they were suppressed and censored as heretics and banished by the power and wealth centres of religious institutions.
Today with the advent of advanced tools in archaeology such as deep penetration radar and improved carbon dating as well as through comparative literary analysis, the literary interpretations of sacred texts fail to withstand any valid conjecture between what is the intended revelation and what is stated in the texts as interpreted in a historical and materialistic context.
My own personnel approach is that the current culture of fundamentalism and violence cannot be reversed through a reactionary mode but rather through inculcation of a cosmic perspective of individual spirituality. We have to become aware of how deeply our reality has been distorted.
As Morpheus says to Neo in the movie Matrix: “You take the blue pill, the story ends. You wake up in your bed and believe whatever you want to believe. You take the red pill, you stay in Wonderland, and I show you how deep the rabbit hole goes." The term red pill refers to a human that is aware of the true nature of the Matrix or the false reality in which we live.
Today science, especially through discoveries in Quantum physics, biology, cognitive sciences and Cosmology, is coming to our aid and it is high time that many are made aware of the true nature of our real self and the basic purpose of creation.
“The very meaning of the word universe is to “turn around one thing.” There is either some Big Truth in this universe, or it is an incoherent universe. We are hardwired for the Big Picture, for transcendence, for ongoing growth (another name for evolution), for union with ourselves and everything else.” …….Joseph Chiltern Pearce
Karl Rahner, German Jesuit Priest and twentieth century theologian, said:
“We are “pressured” from within to evolve. That pressure is what we have always called the Holy Spirit, Prana or Chi. And the Spirit is creatively at work in this moment, urging us to evolve, to become a new kind of human being such as the world has rarely seen before. But what has been rare must now become commonplace.”
A great message was given by great Indian spiritual master:
“Different people call on [God] by different names: some as Allah, some as God, and others as Krishna, Siva, and Brahman. It is like the water in a lake. Some drink it at one place and call it 'jal', others at another place and call it 'pani', and still others at a third place and call it 'water'. The Hindus call it 'jal', the Christians 'water', and the Moslems 'pani'. But it is one and the same thing.” ………Ramakrishna Paramahmsa
Love to you all

How to Acquire U.S. Visa for Non-immigrants