Update: Man who ripped out girlfriend's intestines after she Call her ex's name during sex has been sentenced to life imprisonment

Update: Man who Ripped out girlfriend's intestines after she mentioned her ex's name during sex has been sentenced to life imprisonment 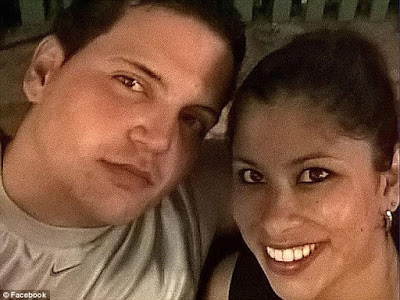 The Florida man who ripped out his girlfriend's intestines after she screamed her ex-husband's name during a session of drunken intimacy, has been sentenced to life imprisonment.
Recall that Fidel Lopez, 26, in June offered to plead guilty to the charges in the hope of securing a 50-year jail sentence, while prosecutors rejected the offer and settled on life sentence for the brutal murder of his girlfriend, 31-year-old Maria Nemeth in 2015. A judge on Thursday handed down the life sentence for the 26-year old without a possibility of parole, CBS Miami reported.
Ahead of his sentencing, Lopez apologized to Nemeth’s family through a translator, according to the news station.
“Today, I’m happy to fulfill this conviction… I know what I did has to be paid for and I agree… I pay with my life for the life I took,” he said. “To Maria’s family, I ask forgiveness.”
Nemeth’s father struggled to put the feelings of his loss into words on Thursday.
“If I had to summarize the life of Maria, it would be very difficult to express it in a few line,” he said through a translator. “I just want to tell you all that she was and will continue to be a model of affection, effort, perseverance, and love of humanity.

7 THINGS HE DOES WHEN HE TRULY LOVES YOU

Update: Man who ripped out girlfriend's intestines after she Call her ex's name during sex has been sentenced to life imprisonment