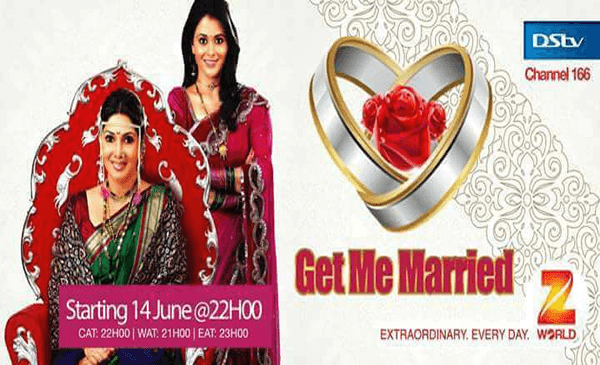 Here's a first look at the teasers for Zee World's new soapie Get Me Married, which premieres tonight (Wednesday, 14 June 2017) at 22h00, replacing Sands of Time.

The story centres round the Ratnaparkhi family who all live together in one house - in harmony. BUT Vinayak's daughters-in-law dream of getting the family wealth divided so they can move out of the family home.

Something he doesn't want.

Coming up in its premiere episodes:

What will Vinayak do to keep the family together?

Vinayak is upset with the attention concerning his marriage. Vinayak bumps into Gayatri who almost knocks him over. Meera tries to convince her sisters in law to take back their division demand.

Vinayak bumps into Gayatri again and this time splashes mud on her by mistake. He takes her home to wash up, and the family members think she's their future mother in law.

Rishi decides to go back to London. Meera gives Rishi an ultimatum that she'll find happiness for Vinayak again, even if it means going against her own husband. Vinayak's health gets affected thinking about Rishi's departure to london.

After Meera's confession about Vinayak's marriage, Rishi reveals his truth about London. Kash and Natasha think that Meera is the favorite and go out of their way to cater to Vinayak. Kash ends up in a fight with Gayatri.

In a surprising twist, Natasha and Kash suddenly support Vinayak's decision to marry. Vinayak's friends talk to Gayatri about her marriage to Vinayak. An angry Gayatri, confront Vinayak, and seeing this, Meera starts to get ideas.

Natasha finds a match for Vinayak but his sons get to meet her first. They decide to share a few facts about Vinayak. Meera has her eyes set on Gayatri. Gayatri has to vacate her house and she decides to leave the town.

Gayatri settles into Vinayak's cottage but Kash has a huge problem having her around. According to family tradition, the eldest woman in the house makes the prayer offerings. Meera and Gayatri end up making the offering before Natasha.

Kash finds a match for Vinayak and trains her on how to imitate Vinayak's first wife. She also lies to Gayatri that people are gossiping about her and Vinayak. Gayatri decides to leave.

The three sons come up with a plan, to get their wives to fight amongst themselves, and realize that another woman in the house won’t work. Natasha insults Vidula. Vinayak decides to speak to Gayatri about her decision to leave.

Kash decides to take advantage of the prayers to get hold of Vinayak’s birth chart. She plans to get one made to match, so that Vidula ends up looking like his perfect bride. Meera prays for a miracle to stop Gayatri from leaving.

Kash stops Varun from taking money to the hospital for Gayatri's operation. Vinayak decides to take the money himself. Kash tries to provoke Gayatri against Meera, claiming she has ulterior motives.

Gayatri thinks back to Kash's harsh words to her. Gayatri disappears from the hospital, and Meera can't stop thinking about her. Varun finds Vidula scratching through his father's belongings.


Premiere episodes of Get Me Married air on Zee World from Mondays to Fridays at 22h00.

Gayatri is arrested. Meera confronts Kash about her suspicions that she visited Gayatri in hospital. Kash slaps her and takes it a little too far. Natasha is back home and Kash tries to get her on her side.

Meera tries to clear Gayatri's doubts. Natasha notices Vidula’s attempts to get closer to Vinayak. A priest matches Vinayak and Vidula’s birth charts. Gayatri gets a job at an Ashram. Kash dreams of moving overseas.

Vinayak decides to divide the property. Meera asks the family if they can all live like a happy family while they still can. Gayatri notices that Vinayak is not the same man and steps in when he is about to sign the division papers.

Gayatri asks Vinayak if he’ll marry her. Kash and Natasha realize that Vinayak’s marriage might be the way to getting the property divided. The Ratnaparkhi family go to the Ashram to speak to Gayatri.

The house is full of wedding fever and guests start to arrive. The first to visit is Aunt Rukmini. The wedding ceremonies start and the big day draws closer.

Kash tries to send Aunt Rukmini home so that the property papers can be signed. Meera pleads with Vinayak not to sign the papers. Gayatri stops Vinayak from signing and Kash and Natasha pack their bags to leave the house.

Natasha and Kash leave the house but spend the day outside the door. Gayatri asks the family to have patience with her ways, and that this will benefit the family. Meera pleads with Kash and Natasha to come back home.

The family begin to think that Gayatri made a mistake by allowing the daughters-in-law to leave, but just then Natasha returns home. Gayatri puts Natasha through a test before she can get comfortable in the house again.

Gayatri catches Natasha on the phone, but before she can do anything about it, Kash returns home. Gayatri has a special test for Kash too. Will Kash manage to pass Gayatri's test?

Gayatri takes the test to a whole new level and Kash swears to get her back for it. It’s a festival day and Kash and Natasha’s punishment is to clean the whole house themselves, but Kash has a plan of her own.

The Diwali festivities begin. Vinayak gives Gayatri a gift that belonged to Shanti. Natasha sees the gift and decides she will ask Vinayak for it, as on the festival day, Vinayak doesn't refuse them anything.

Kash asks Vinayak for something that she knows will upset Gayatri. Meera asks Rishi to call Gayatri ‘mother’. Kash asks Natasha to meet a strange person that'll get Natasha her rightful place in the house.

Kash and Natasha spike Gayatri's tea with a powder that will damage her voice. While they take pleasure seeing her struggling to speak, Natasha swears that this is not the end of her revenge.

Kash and Natasha take full advantage of Gayatri's condition to insult her about hiding her past. Kash swears that she will also take revenge for what Gayatri did to her and comes up with a plan to slap Gayatri.

Kash asks Vinayak for something that she knows will upset Gayatri. Meera asks Rishi to call Gayatri ‘mother’. Kash asks Natasha to meet a strange person that'll get Natasha her rightful place in the house.

Vinayak and Gayatri prepare to go to the farmhouse. Kash and Natasha promise to make every moment difficult for them. Rishi wants some alone time with Meera and tries to send his brothers away as well.

Vinayak and Gayatri have a tough time getting to the farmhouse. Kash and Natasha follow them and cause problems on the way, but it seems luck may have the couple's back. Vinayak's sons take advantage of the empty house to have some fun.

Gayatri has an instinct that someone’s causing trouble for them. Back in the house, Natasha and Kash continue to pick fights with Gayatri, who decides to have a competition amongst her daughters-in-law.

The competition gets tougher as the next round takes everyone to a village. The daughters-in-law have to show they can survive without luxuries. The tasks seem to prove a little difficult for Kash.


Premiere episodes of Get Me Married air on Zee World from Mondays to Fridays at 22h00.