2017 Budget To Be Signed By President Buhari Next Week 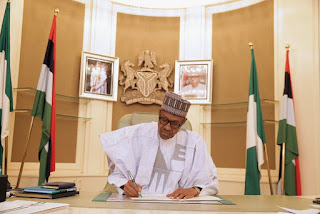 The Senate Leader, Ahmed Lawan, on Thursday revealed that “all things being equal”, President Muhammadu Buhari will sign the 2017 Appropriation Bill despite the hitches being experienced on the passage of the document at the National Assembly.
Lawan disclosed this in an interview with State House correspondents after he met behind closed doors with President Muhammadu Buhari at the Presidential Villa, Abuja.
While saying there is nothing to worry about on the document, the Senate Leader recalled that the National Assembly had intended to pass the budget in March.
He said that target could not be met because of some parameters that lawmakers did not have control over.
He said while it was also planned to be passed in April, the residence of the Chairman, Senate Committee on Appropriation, Danjuma Goje, was raided by the police and parts of the Budget documents were taken away.
He said;

What is Conversion Tracking? How to S…
Self-care lets me not give a “darn” a…
CBD 2020: What to Expect + Our Top Pr…
Vechain Blockchain Technology Powers …
500 One Word Substitution Book PDF Fr…
Read more »

2017 Budget To Be Signed By President Buhari Next Week