Nebulae are among the most beautiful objects in the universe. They are essentially enormous clouds of dust and gas that can shine for hundreds of thousands of years, reminding us that space is scary and sometimes unpredictable. Luckily, there are no stars in our immediate stellar neighborhood large enough to form a nebula, but it sure would be a sight.

There are many different ways in which nebulae form, but in their most basic state, they are enormous clouds of gas and dust that exist in molecular clouds. Once enough matter collects in one place, the cloud becomes dense enough that it collapses under its own weight, which is the first step to forming a protostar. These protostars cut out and shape these stellar nurseries, encouraging the formation of more and more stars. Naturally, this sort of explains why some stars live in massive clusters or form planetary systems with multiple “Suns.”

The second step to forming a star comes when the core of the protostar becomes hot enough to initiate the process of nuclear fusion, whereby lighter elements such as helium and hydrogen are fused into heavier elements.

Of course, according to Hubblesite, “Not all of the material in the collapsing cloud ends up as part of a star — the remaining dust can become planets, asteroids or comets, or it may remain as dust. Scientists running three-dimensional computer models of star formation predict that the spinning clouds of collapsing gas and dust may break up into two or three distinct blobs. This would explain why the majority of the stars in the Milky Way are paired or in groups of multiple stars.”

How is a nebula formed?

Image of the Crab Nebula taken by the Hubble Telescope. Source: NASA, ESA, J. Hester and A. Loll/Wikimedia Commons

While space may appear to be an empty vacuum, some regions actually contain a fair amount of gas and dust. We refer to the space between stars as the interstellar medium (ISM). Overall, the gas in the interstellar medium is believed to be made up of roughly 75% hydrogen and around 25% helium — with very small amounts (around 0.1%) of heavier elements such as oxygen, carbon, and nitrogen (which are important ingredients for the formation of life as we know it). It is also known to include neutral atoms and molecules and charged particles, many in the form of ions and electrons. The particles tend to be spread out over a large area with an average density of around one atom per cubic centimeter.

Over time, the gas and dust can be slowly drawn together by gravitational attraction, resulting in large “knots” of material. However, gravitational attraction is not the only way nebulae are formed. One type of nebula is born when a star with a significantly higher mass than our Sun reaches its death throes. As it collapses in on itself, its gas and other material are blown out into space — forming a supernova. Sometimes, the ionized gases, called supernova remnants, are visible from Earth, but in many cases, they merely spit out x-ray and radio waves, which can still be detected with specialized telescopes.

Apart from supernova remnants, there are four other types of nebulae. Let’s take a look at them and discuss how each forms.

To start, emission nebulae are some of the most fascinating (and common) nebulae in the universe. They essentially consist of large clouds of ionized gas, which can often emit light at optical wavelengths (meaning, we can see them without specialized telescopes). They have highly variable densities and can be relatively small in mass or absolutely enormous, ranging from 100 to 10,000 solar masses of material (one solar mass is equal to the mass of the Sun) — all scattered across a volume ranging from less than a light-year to a several hundred light-years. 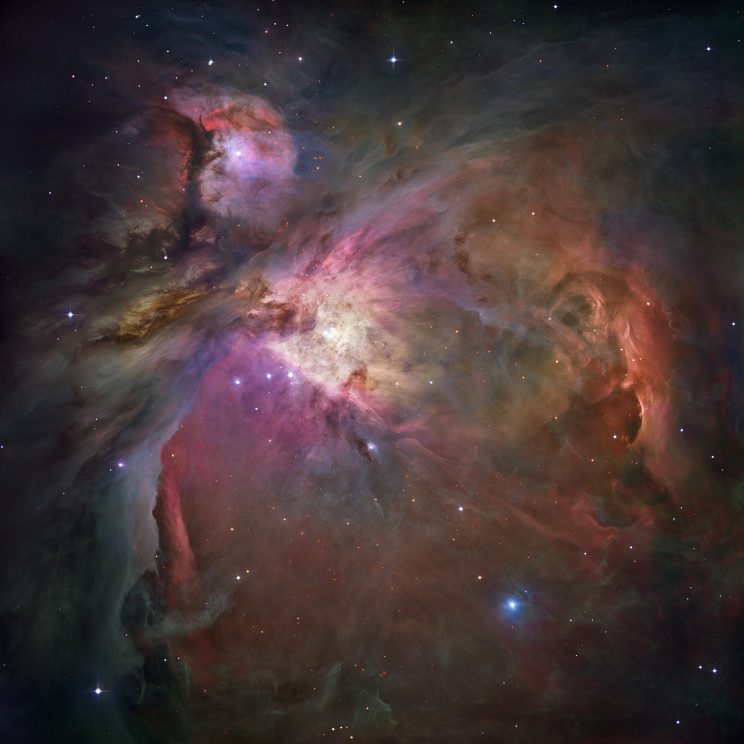 Emission nebulae form when the region around an interstellar gas cloud happens to contain high concentrations of neutral hydrogen atoms. These neutral hydrogen atoms can then become ionized by bluish-white, O-type, B-type stars, and newborn stars within the stellar nursery. They are extremely hot, with surface temperatures that span between 25,000 to 500,000 K. They are so hot and energetic that they give off large amounts of high-energy photons, which essentially strip atoms of their electrons. When they ultimately recombine, they become ionized and glow very vividly.

Probably the most famous emission nebula is the breathtaking Orion Nebula (also known as Messier 42, or M42, see above).

Planetary nebulae are a form of emission nebulae. They form when a Sun-like star reaches the end of its life. After it swells into a red giant that consumes everything in its path, it will contract. The remaining mass will become crammed into an object, called a white dwarf, with about half the mass of the Sun. In this case, the gases it spits out, which can contain significant amounts of helium and oxygen, become ionized by the white dwarf, which is when a planetary nebula forms. Some of the most famous include the Helix Nebula, the Cat’s Eye Nebula, and the Butterfly Nebula.

Unlike the bright and hot stars that come to form emission nebulae, reflection nebulae exist within massive clouds of gas and mostly dust. Additionally, the nebulae themselves do not emit any of their own light. Rather, light from nearby stars bounces around and is ultimately scattered, thereby forming a reflection nebula.

The temperature and luminosity of the nearby stars shape how bright these objects are. Like emission nebulae, they are typically illuminated by B-type stars. They are not only bright but also much cooler than those that produce emission nebulae (they can reach temperatures of 25,000 K).

Moreover, the scattered light becomes slightly polarised when carbon compounds within the dust, along with additional elements like nickel and iron, become aligned with “the galactic magnetic field.”

Much in the same way Earth’s sky is blue because shorter wavelengths of light are scattered more by the molecules of nitrogen and oxygen in the atmosphere, reflection nebulae also tend to be blue. In reflection nebulae, the size of the dust grains means that light scatters more efficiently on the blue side of the electromagnetic spectrum instead of red – hence why most reflection nebulae appear blue. Nonetheless, how bright the nebulae become hinges on the size and density of the grains of dust, along with the color and luminosity of the stars nearby.

Sort of like reflection nebulae, dust is a big contributing factor to how these objects form and how they look. In the case of dark nebulae, the concentration of dust is just so dense, it tends to absorb the light of the stars within at visible wavelengths — making them appear black (hence the name). Believe it or not, these places contain lots of molecular hydrogen and are prime real estate for stellar nurseries.

Typically, they are very hard to detect, but they can be seen when they are in close proximity (or behind) emission nebulae or really bright stars. One interesting fact is that the immense clouds of gas and dust making up dark nebulae are extremely cool — with temperatures sometimes barely meeting 10 Kelvin (K). On the higher end, they sometimes reach 100 K. Interestingly, the low temperatures make these massive molecular clouds even more conducive to star formation, as the temperatures are known to encourage hydrogen formation.

Bok globules are smaller types of dark nebulae. They are dark nebulae, but they tend to be much smaller and more isolated, with sizes generally less than three light-years across and containing between 0.1 and 2000 solar masses of gas and dust.

Bok globules are especially interesting to astronomers as they are often thought to contain the embryos of new stars, making it easier to examine the very early stages of star formation. Research on a number of Bok Globules has found ongoing star formation activity happening within, including evidence of multiple stars at different ages.

Some famous examples of dark nebulae include the Coal Sack Nebula, visible in the southern hemisphere, and the Horsehead Nebula. 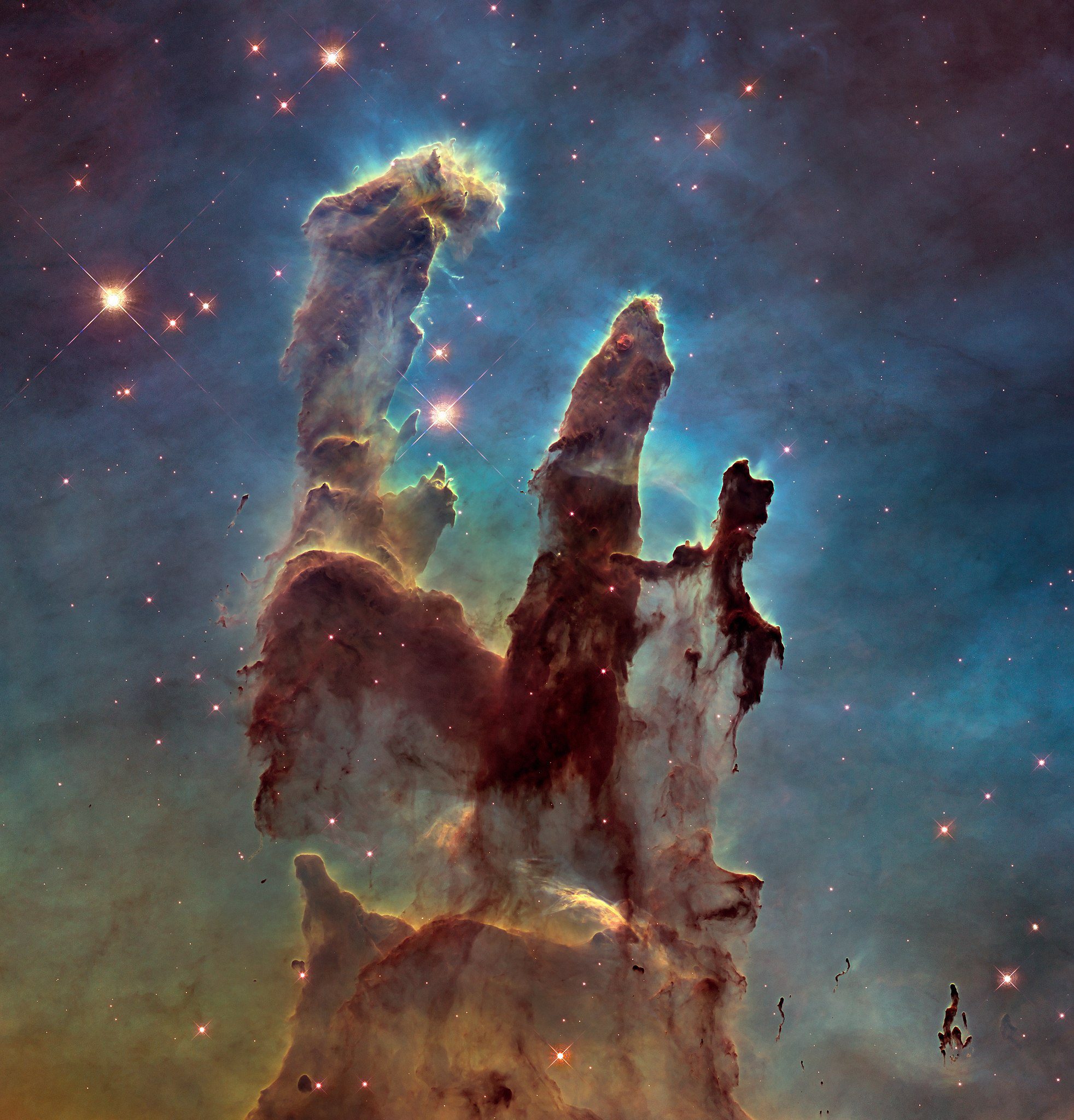 Here are some surprising facts about outer space dust clouds:

Many people might think that nebulae are just colorful dust clouds that astronomers image through telescopes (very bright nebulae like the Orion nebula can be observed even with the naked eye), but they are so much more. Not only are stars and solar systems born in them, but our whole universe continuously evolves by the means of these stellar clouds.

The post Nebulae: Here's why these giant clouds of dust and gas are essential for our universe appeared first on GulpMatrix.