When you get down to it, most smart Switches are not all that smart. A wireless radio that talks to a hub or an app? Maybe a touch-sensitive dimmer? That’s it? Surely we can do better than that in late 2017. Noon Lighting thinks it can, and even in version 1.0, its eponymous Noon Lighting System is easily the most inventive and capable smart switch on the market. It’s also very expensive, but oh so worth the cost.

The central idea of the Noon Lighting System can be found in the Noon Room Director, a single rocker-sized switch with an OLED touchscreen embedded into its surface. The Room Director replaces one centrally located switch and does the heavy lifting for the system. Additional switches in the area can be replaced with the less-expensive and touchscreen-less Noon Extension Switches.

Now here’s where the magic starts: The Room Director can control not just the circuit it’s wired to, but as many as 10 Extension switches, too. If your living room has three or four switches used to control various lamps and light fixtures, you no longer need to wander the room to turn them all on or off or adjust their brightness. You can program the Room Director to handle all of them. But that’s not the end of it, because the Room Director supports multiple lighting scenes that you create through its savvy, well-designed app.

The completed assembly is sophisticated and clearly future-forward.The Director connects to your Wi-Fi network and talks to the Extension Switches using Bluetooth.

" href="https://images.idgesg.net/images/article/2017/12/noon-three-gang-100745336-orig.jpg" rel="nofollow">
The completed assembly is sophisticated and clearly future-forward.The Director connects to your Wi-Fi network and talks to the Extension Switches using Bluetooth.
I installed the system in my kitchen, which has three types of lights: overhead canister LEDs, under-cabinet fluorescents, and a chandelier with incandescent bulbs in the dining area. With Noon Lighting I was able to set up scenes to turn on all the lights at full blast, or just a few of them at a lower brightness level in whatever combination I desired. Every Noon switch includes a dimmer system, so you really have a mountain of options available.

The Room Director is the centerpiece, and it works beautifully. Its integrated OLED is bright and vividly displays the name of the scene you’re running along with its icon, automatically lighting up when you pass by. To switch scenes, you simply swipe up or down on the switch panel. To turn the whole thing off, just depress the bottom of the switch as you normally would flip a switch.

You'll assign your lights to rooms first, and then you'll organize them into groups that can be controlled all at once with a touch or with a voice command if you have an Amazon Echo. 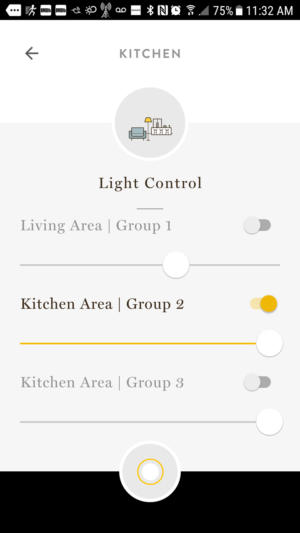 You’ll assign your lights to rooms first, and then you’ll organize them into groups that can be controlled all at once with a touch or with a voice command if you have an Amazon Echo.

Extension Switches work independently of the Room Director, too, so if you have a scene active with all the lights on, but you change your mind about one of them, you can still flip the switch to turn those lights off, or use the integrated hardware control to dim them. Of course, you can do all of this via the app, too, and change anything on the fly if you want to tweak any of the settings. My family ended up balking about having the under-cabinet lights on so frequently, and disabling them in the scene was trivially easy. On the whole, the versatility of the system is incredible.

Normally I would have installed all of this myself, but Noon offers professional installation at a price of $150 plus $20 per switch after the first three, and at the company’s request we tried it out. The installer (a Noon employee; yours would be a local, approved electrician) spent about 90 minutes asking about our setup, performing the installation, walking me through the app, and training me on the system. It was very professional and painless, the only hiccup being that the system wouldn’t work with a fourth switch in the kitchen because that one junction box turned out to be missing a neutral wire. (Both neutral and ground wires are required for any of this to work.) That left me with one extension switch that still works, but not perfectly.

Noon offers additional features, as well. There’s an Alexa skill, so it’s important that you give your lighting scenes names that are relevant but also distinct and memorable. “Everyday” could turn on the groups of lights you routinely turn on each day—but all at once and at your preferred brightness level. “Dinner” might dim or turn off the task lighting at your kitchen counter and make the chandelier over your dining table the focal point. Every scene might include turning on the accent light focused on a treasured painting.

You'll typically activate lighting scenes made up by a number of fixtures, so it's important to give the scenes names that are both evocative and memorable. 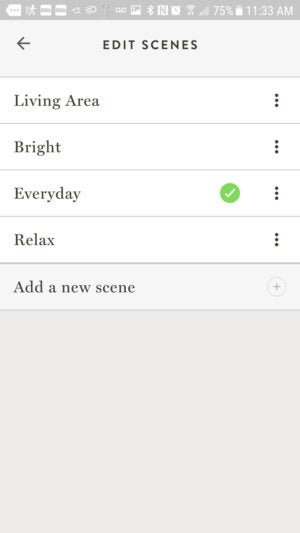 You’ll typically activate lighting scenes made up by a number of fixtures, so it’s important to give the scenes names that are both evocative and memorable.

There’s also a nifty nightlight mode that, when triggered by the Director’s motion sensor, sets the lights to an ultra-low dimness, but it only turned on the lights in my dining area, not the overhead canisters. As well, the light was so creepy my wife insisted we turn the feature off (as there’s no way to program the level of brightness). A vacation mode built into the app reportedly learns from your habits to mimic real-world usage patterns, though this is difficult to fully test without leaving on vacation for a few weeks.

The Noon Lighting System is a fantastic product that will surely improve further over time. My only real complaint is, of course, the price. A starter kit with one Director and two Extension Switches costs $400. Each additional Extension costs $100, and each additional Director costs $200. If you don’t want to do the installation yourself, you’ll need to budget an additional $150 or more for a professional. Outfitting my entire house would cost more than $2,000—for switches. That’s a downright crazy amount of money that only the most dedicated smart home enthusiasts will be interested in shelling out. If you’re one of those people, you’ll find the investment worth making.

Addendum, by Executive Editor Michael Brown: My original idea for this review was to have Christopher experience the professional installation while I took the DIY path. Noon’s documentation comes on high-quality paper with excellent diagrams and well-written directions. They even provide a wall protector that you can hang below the junction box to prevent anything from marring the wall. Noon also has great collection of how-to videos that show you the ropes step by step. And I got great technical support over the phone.

Wiring can be complex, and this three-gang box doesn’t even have any multi-pole switches. Professional installation starts at $150. 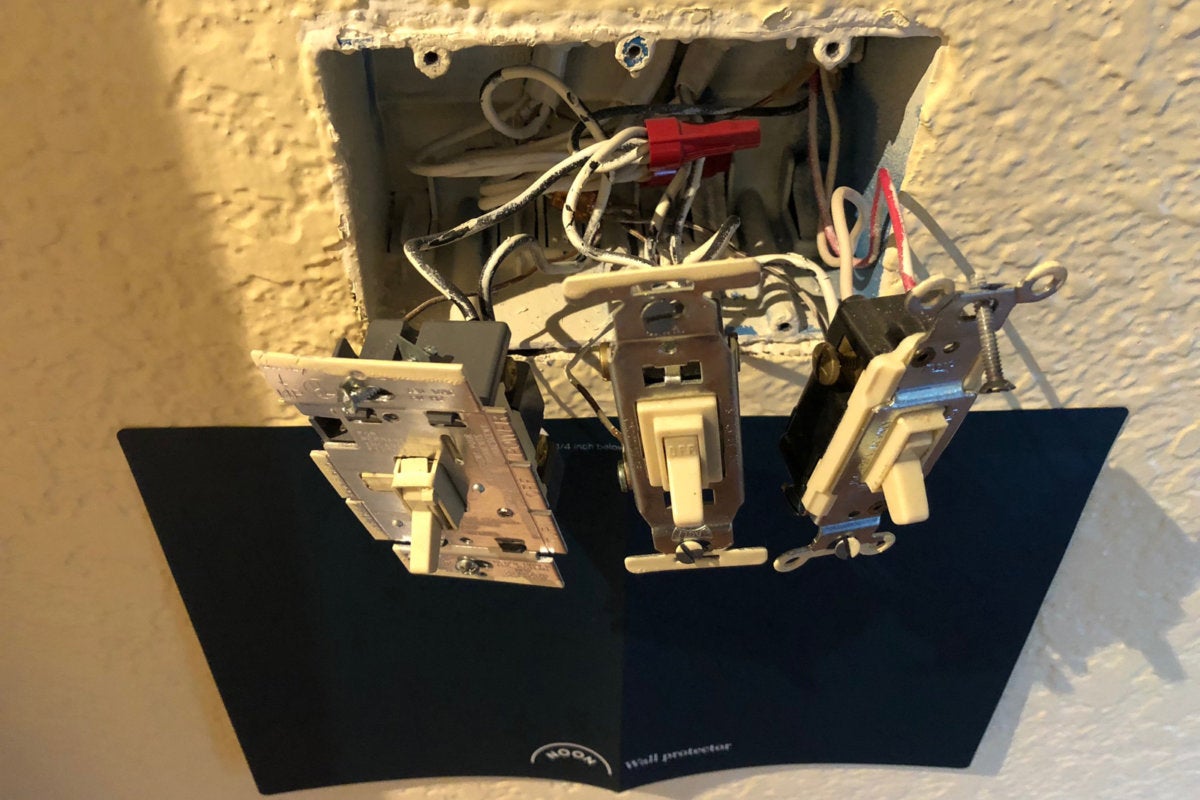 Wiring can be complex, and this three-gang box doesn’t even have any multi-pole switches. Professional installation starts at $150.
But in the end, I had to bring in the professional electrician who wired my home when it was built 10 years ago. He had previously retrofitted the home with Leviton Decora RF (Z-Wave) switches, and he said that job had required him to perform some unconventional modifications to my home’s wiring, which is why I ran into trouble replacing them with the Noon switches. There was also one box that didn’t have a neutral wire in it, but he was able to reconfigure it—a trick that few DIYers will be able to pull off

In addition to the great instructional manual, Noon provides labels that you attach to the ground, line, load, and neutral wires before you disconnect the switch you’re replacing. But there is no real standard that lets you identify the function of a wire based on its color. Another factor that complicated my installation was that nearly every light in the two rooms I was setting up—my kitchen and an adjoining great room—is controlled by more than one switch. I encountered difficulty identifying which wire was the traveler that connected the pairs of switches together. Factors such as these can trip up an amateur. All that said, I’m confident that most people will be able to install a Noon system on their own, provided they have neutral wires in their walls.

You can hang Noon's switches from the wall side of the two-piece cover plate while you're wiring them. 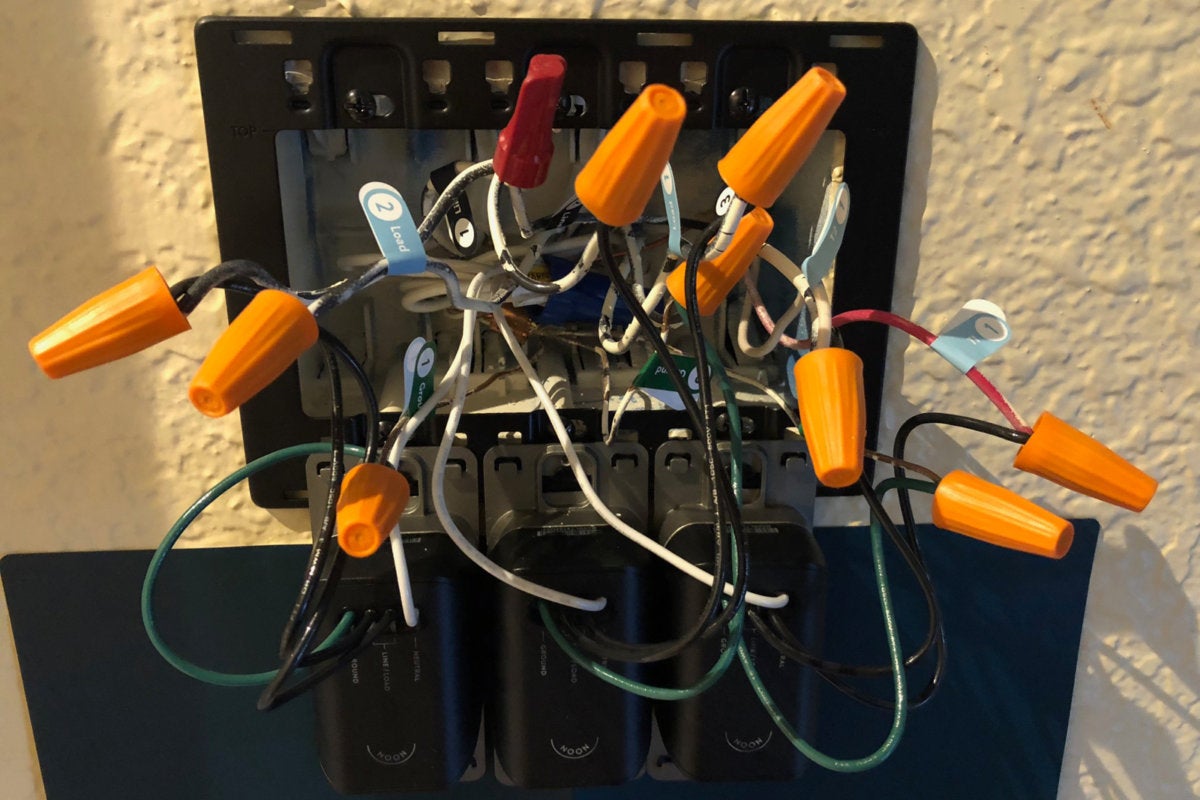 You can hang Noon’s switches from the wall side of the two-piece cover plate while you’re wiring them.
Multi-way configurations such as mine, however, will also drive up the cost of a Noon installation. As with most smart switches, including the Z-Wave switches I replaced, Noon requires that you have a companion switch at each end of the circuit. I ended up with the Director and one Extension controlling five ceiling cans in the great room, two Extensions controlling a pair of pendant lights over my breakfast bar, two Extensions controlling two ceiling cans outside my pantry, and one Extension controlling an accent light focused on a painting over my fireplace (that was the only single-pole switch I replaced). A setup like that will cost $700 to control four groups of lights. The starter kit comes with elegant cover plates (one each single-, double-, and triple-gang) that hide all the screws, but you’ll need to buy them separately for the Extensions ($10 for a single-gang plate, $12 for a double, $15 for a triple, and $20 for a quad). You can use also any rocker-style plate.

The more lights you have in a room, the more benefit you’ll get from controlling them with Noon’s system, because you can create so many lighting scenes. But you’ll get the biggest bang from bulbs that can be dimmed—incandescents perform the best, but dimmable LEDs are a close second. One more thing you’ll want to be aware of: Most switches and dimmers can handle 600 watts of electricity. Noon’s Directors and Extensions can handle only 500 watts. If you have a group of six 100-watt bulbs, you’ll need to replace them with lower wattage bulbs—but you should probably use LEDs anyway.