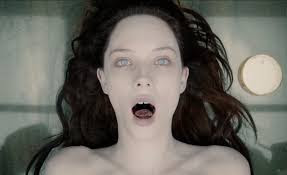 “THE AUTOPSY OF JANE DOE: Visceral horror to rival ALIEN and early Cronenberg. Watch it, but not alone.” ……Stephen King


The Autopsy of Jane Doe is a film that you may not have heard of. After all, when you have supernatural thrillers and horror films as good as Stranger Things and Stephen King’s It around, a Stephen King fan has more than enough viewing choices to keep them happy these days. Add to that the fact that The Autopsy of Jane Doe has not been heavily marketed and it was only shown in selected cinemas, and it would have been easy to have missed this gem of a horror movie.

If you have never heard of The Autopsy of Jane Doe, you might be surprised to hear that the film received 87% positive reviews on Rotten Tomatoes. That site called it “a smart, suggestively creepy thriller” and Dennis Harvey of Variety called it a "taut, yet often slyly funny scarefest". The Autopsy of Jane Doe has received the approval of the King of Horror himself, Stephen King:

THE AUTOPSY OF JANE DOE: Visceral horror to rival ALIEN and early Cronenberg. Watch it, but not alone.

The Autopsy of Jane Doe was released in 2016 and it was directed by André Øvredal, who also directed the cult horror film Troll Hunter.  Here is the official trailer for The Autopsy of Jane Doe:
The film opens with the discovery of a multiple murder scene. Along with the bloody remains of three of the murder victims, the perfectly preserved body of a woman is also found, half buried in the floor of a basement.

The woman’s corpse is taken to the mortuary of father-son coroners Tommy and Austin Tilden, where Austin is showing his girlfriend around the mortuary before they go out on a date (as you do!).

Austin’s Girlfriend, Emma, notices a bell that has been tied to one of the corpse’s feet, which Tommy explains is the old coroners way to ensure that the body is indeed a dead one and not someone who has merely slipped into a coma. 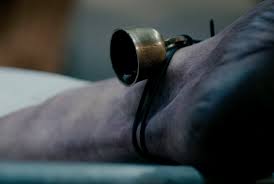 Tommy and Austin were about to finish up for the day, but the local sheriff persuades Tommy to complete an autopsy on the Jane Doe that night, because he needs to ascertain the cause of death urgently. Reluctantly, Austin agrees to stay and help his father, telling his girlfriend Emma to come back later so that they can catch the late show in the cinema.

It’s when the father and son team begin the autopsy that things begin to get weird. They also start to get pretty gory too, so if you have a weak stomach, this is the point in the film that you may begin to wish that you hadn’t eaten quite so much for lunch.

While a storm rages outside, the power goes off and a tree falls against the doors of the basement morgue trapping Tommy and Austin inside, but the generator kicks in, so they begin the autopsy. As their work continues, they find more questions than they do answers. 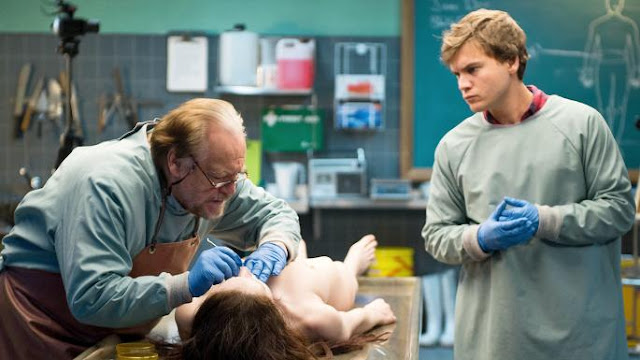 The Jane Doe has obviously suffered severe trauma, but there are not any external injuries. The woman’s wrists and ankles have been shattered, her tongue has been cut out, her lungs are burned on the inside, and her internal organs bear the scars of a repeated stabbing, but there are no outward marks on her body.

As the autopsy progresses, things just get weirder and weirder. The radio in the morgue starts to randomly switch channels, and the pet cat is found fatally injured. When the pair cut open the woman’s stomach they find one of her teeth wrapped in a cloth inside and they see that she has strange symbols tattooed on the inside of her stomach. The light bulbs blow and bodies in the morgue go missing. Tommy and Austin decide it’s time to go, but the elevator isn’t working. That’s when they hear a bell ringing, outside in the hallway. 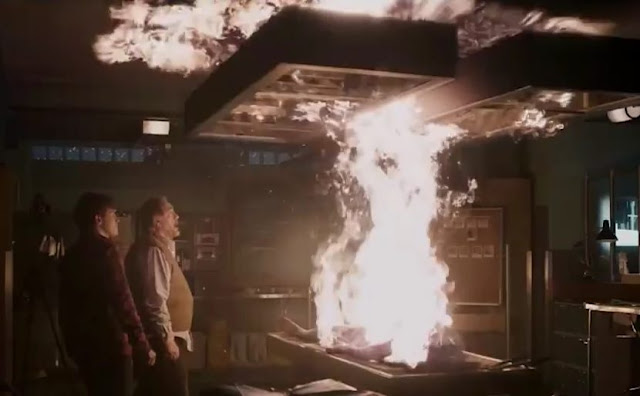 The Autopsy of Jane Doe is not a special effects extravaganza by any means. In fact, one of the amazing things about the film is that a live actress, Olwen Catherine Kelly, plays the corpse of the Jane Doe thought the movie. You might think that playing the role of a dead person is easy, but when you watch the film, you will see why it’s not. You won’t believe that Jane Doe isn’t a latex mock-up of a corpse, until you see a close-up of her eyes, which is when the film starts to get really creepy.
Another commendable aspect of the film is its realism. This is no sanitised NCIS style autopsy scene; this is what you might imagine a real autopsy to be like. It is not gore for the sake of gore though; The Autopsy of Jane Doe is a film with a genuinely scary story that unfolds as the autopsy is performed.
The Autopsy of Jane Doe made only $6 million at the box office, which might explain why the film has not been heavily marketed. Despite that, however, it is rapidly gaining a cult status. Once you have watched The Autopsy of Jane Doe, you will be wondering why the studio hasn’t spent a lot more money on publicising such a great horror movie.
-