I love sea. I love swimming even though I am not a swimmer, or I actually seriously don't know how to swim. Yes, I am surrounded with seas but I actually honestly can only swim in the sea at least once a year. I do not enjoy swimming in a pool, or 4ft deep pool which is available near my home, it's no fun. 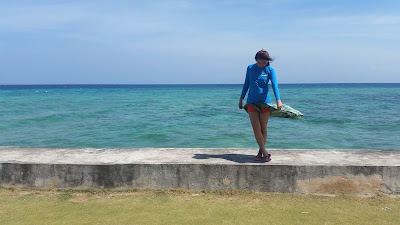 I like the waves of the sea, the smell of it, the color and the sparkling surface whenever the sun shows up so brightly above it. I like how the sea holds so much life underneath it and gives opportunities to humans not just in fishing, but also in navigating the lands of the world.

Oh! I'm lost to the other world again.

So, there I was. Going to the South of Cebu once again.
It is summer time and the month of May.
In this month, high tide season would mostly start from 9AM till 11AM or 12AM only. With that in mind, the sea level would slowly go down in the afternoon, until you see a huge beach front or wider land area of the beach.
And being there in the afternoon is not a waste. It is another way to enjoy the marine species.

I especially like shellfish gleaning. Although it takes so much time, and I had to take a lot to enjoy it, it is still fun and enjoyable.
So, there I went to the beach with my younger male cousin.
We had to walk a kilometer down from a mountain to the sea.
It was already mid afternoon, so the sea is very far from the shore already.
We looked for sea urchins.

There are two kinds of sea urchins that I know of, (1) black sea urchin that we Bisaya would call "toyom", and (2) a colorful sea urchin that we call "salwaki".
"Toyom" is very abundant in public seas because they weren't taken much by people. This creature is quite dangerous too, so cautiousness and being extra careful is needed.
That black sea urchin has really long spikes and once a person accidentally touch that, it would sting so painfully.
One of the ways to get this (if you really prefer this one), is to get a stick and use it to hit the edges of the sea urchin. The edges will break easily, or just get it and put it in a net bag together with the other sea urchins taken from the sea.
Shaking the net bag will break the spiky thorns of the specie.
In my case, I was not prepared enough to do shellfish gleaning because I initially planned to just take a dip and enjoy the sea.
So, we took the colorful sea urchins instead.

They are safer because their spikes don't actually get into the skin quickly as the black ones. It moves so easily that the spikes lay down like it is shy. 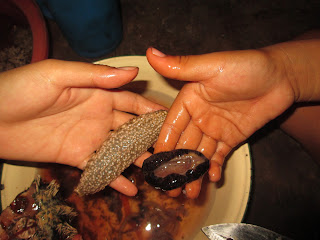 We can just get and keep hold of the sea urchin with bare hands. However, holding it for quite a long time, it actually expels a sticky liquid that will keep itself intact with the hand holding it. It would feel weird, but it is fine though.

After a few hours of taking a few sea urchins, we went back to the house and it was dark already.
Opening a sea urchin is like cracking an egg, but using a knife to crack the shell.
Be careful to keep the crack in a straight line too.
Take out the innards carefully not to touch the reproductive organs of the specie. 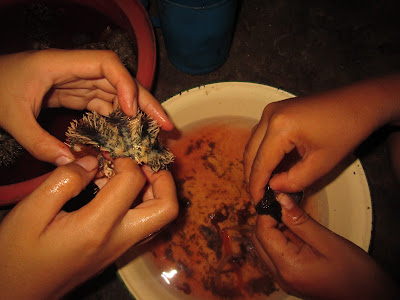 Yes, the yellow thing that will be eaten is the sea urchin's reproductive organ.
While I was busy with the sea urchin, my cousin was busy cleaning the sea cucumber.

After cracking and taking the innards out, carefully remove the yellow matter out of the shells and of course to a plate!
The same thing goes with the sea cucumber, however, you don't have to crack it open. Just slice it and take the innards out and clean it with water.
Whenever you clean it, just use lukewarm water.
Slice the sea cucumber and put it to the plate too. 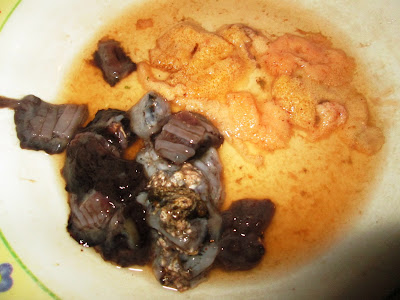 And tadaaa~~~
There~ both are soaked with spicy vinegar or what we call "pinakurat", so the vinegar is almost reddish in color due to the peppers soaked inside the vinegar bottle.
Then, you can eat the sea urchin and sea cucumber raw~
Yeay~~~ we caught a lot, but we only eat few. >.It's so difficult to get lots of it when there is no container or plastic bag with us.
Oh, well. As a city person, I managed to do this, and I still like it.
By the way, I stayed in a traditional house with no electricity.
Being in the mountain and sometimes going to the sea is always my favorite hobby.
Can't wait to go back there!
Yumyumyum... I'm craving for this:
Uni salad at Rai rai ken~~~