Calabar Shuts Down As Southern Senatorial District Endorse Ayade For 2019 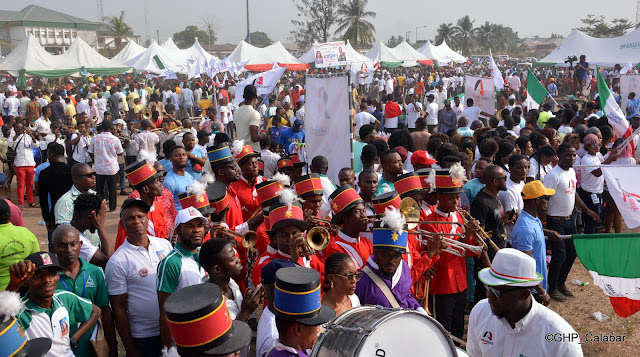 By Aplefe Ojong
It was a bumper-to-bumper stampede and a reenactment of a carnival like atmosphere yesterday in Calabar as the old capital city was grounded by a mamoth crowd of Cross Riverians from the Southern Senatorial District who are asking the state Governor, Senator Ben Ayade to run again in 2019.

A Guide To Visiting Antigua, Guatemal…
The Best Romantic Honeymoon Destinati…
Leaders, youths and women from the Senatorial District declared their total support for the Governor, saying he has surpassed the expectation of their people barely 3 years in office with dwindling allocation amidst heavy debt burden.
Making the declaration in a massively attended endorsement rally held at the open field of the Calabar Municipal Council Headquarters, on Wednesday, representatives of the seven Local GovernmentAreas namely Akamkpa, Akpabuyo, Bakassi, Biase, Calabar Municipality,Calabar South and Odukpani, popularly known as 7-Alive, bigwigs from the south collectively gave Ayade thenod for 2019.
The Chairman of the 7-Alive Organization, Chief Asuquo Ekpenyong, OON and other top political leaders from the district affirmed that they will support governor Ayade to complete his eight year term both based on his excellent performance and the existing zoning arrangement in the state.
In Wednesday’s rally, which made the last actual governorship rally in the state a child’s play, the people of the south posited that themonumental achievements of Governor Ayade,including regular payment of workers’ salaries amidst biting economic recession and poor federal allocation clearly indicates that Ayade is a man of history that must be allowed to exhaust his eight years as governor to be able to take his projects to a logical conclusion.
The 7-Alive Local Governments of the South asserted that besides the fact that Ayade is the man they trusted to return power to the south by 2023, the administration of the Obudu borngovernor has appointed 9 of their sons and daughters as members ofthe state Executive Council, holding key portfolios such as Finance, Health, Petroleum, Gas, Information, Transport, as well as about 1000 otherappointees from the senatorial district.
They cited projects completed and ongoing that are located in thesouth to include the ongoing dualization of Calabar/Odukpani junctionhighway to end the torture that commuters have been enduring on the single lane federal road which is the gateway into a rapidly developing city like Calabar.
The completion of design, debushing and commencement of earth works on the 275 km super highway.
The completion ofdesign, Environmental Impact Assessment (EIA), on the super highway andcommencement of pre-construction and reclamation works at the Bakassi Deep seaport.
Other projects that were named include the completion of the garment factory,pharmaceutical factory, agro-industrial park, rice seeds and seedlingsfactory, construction of Ayade referral hospital in Odukpani.
Completion of design of Teachers Continuous Training College TCTC, Biase,and completion of design and procurement for the installation ofconcrete pipes, piles, bolts in Akamkpa.
Provision of pontoon forRiverine areas between Biase and Odukpani and  construction of banana plantation with automated irrigation, the first in Africa in Odukpani.
Setting up of the homeland security to keep Calabar safe, establishing the Green Sherriff tokeep Calabar clean, ongoing asphalt overlaying of all the roads in Calabar, dramatizing and revolutionizing the carnival Calabar,construction of various network of roads across the entire south andputting food on the table of over 1000 political appointees from the southern senatorial district.
The southern leaders said it is on this basis that the district has adopted Ayade with the hope that the number one position in the state will return to them in 2023. 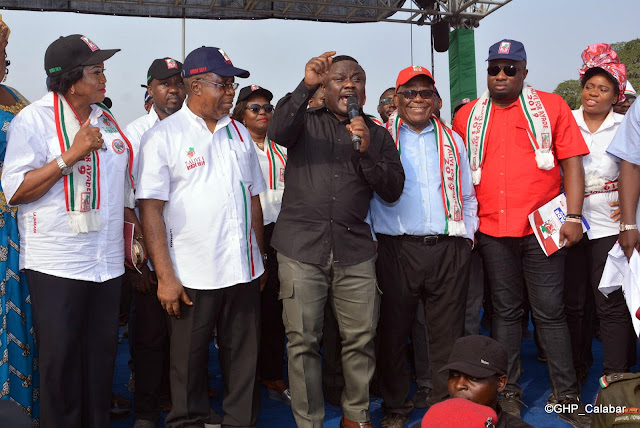 CRS Governor, Senator Ben Ayade (4R) addressing a crowd at an endorsement rally for him in Calabar, Wednesday (Credit: CrossRiverWatch/GHPC/Jonathan Ugbal)
Governor Ayade who made a brief stop atthe event promised that he is preparing to appoint additional 3000 aides to enaire more peoole are given the chance to benefit from government.
The governor said: “Today, look at the statistics, voluntary payment of school fees, house rent payment, medical bills payment, Cross River has noticed a significant improvement, you will notice that more flights are coming into Calabar today.
“You are realizing that Skolombo boys are over, you are realizing that we are having a finer class of society. We may not have eliminated crime in totality, but there is progress. There is homeland security taking care of that.”
He announced that he will be appointing 3000 more appointees to take the number above 6,000 and maintained that his ideology about human existence and not politics as well as the commendations from the people is what inspired his decision to focus more on the people.
“It is against that strength that I am here before you. But, I know very very well that normally in traditional societies where there is always focus on the bottom line which is money, governments don’t focus on people; they focus on projects and things that will get them reelected.
“But I have focused on the stomach, I have focused on the intellect and the future that you have got that I know that it is bigger than even mine; that I feel that this intercourse that we are having will bring a better tomorrow for you,” he said.
The crowd under the aegis of ‘Seven Alive’ led by business mogul, Mr. Asuquo Ekpenyong kept singing customized tunes urging Mr. Ayade and his deputy, Professor Ivara Esu to seek another term in office in 2019.
And, after several speeches from different leaders, a motion for the endorsement of Mr. Ayade and his deputy was moved by the Deputy Speaker of the Cross River State House of Assembly, Mr. Joseph Bassey (PDP, Calabar South 1) and seconded by Mr. Ogban Ogban.
Mr. Bassey said the motion was borne out of a careful evaluation of Mr. Ayade’s performance and other factors. He said that: “On behalf of the people of southern senatorial district, seven alive; after carefully evaluating, crystallizing all the activities and projects of our governor, we the people of southern senatorial district hereby move and be moved that Senator Professor Ben Ayade should be adopted as a consensus candidate in the 2019 elections.”
The endorsement comes as some sort of grand finale after the three federal constituencies in the same senatorial district had at several times in the past two weeks done the same with the Deputy Governor, Prof. Esu in attendance.
PDP Chairman, Inok Edim; Dep. Governor, Ivara Esu; DG Seven Alive Group, Asuquo Ekpenyong Sr; PDP BOT Member, Stella Attoe and Former CRS PDP Chairman, Ekpo Okon were all present at the event.


This post first appeared on Nigeriapen.Com, please read the originial post: here
People also like
A Guide To Visiting Antigua, Guatemala: The Best 5 Things To Do And See
The Best Romantic Honeymoon Destinations in the United States

Calabar Shuts Down As Southern Senatorial District Endorse Ayade For 2019