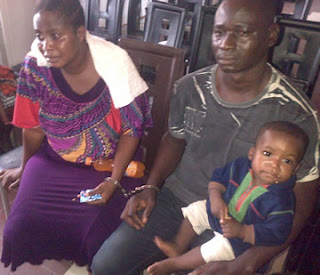 A suspect, Zainab Salisu, who allegedly disguised as a customer to abduct a one-year-old girl, Fehintola Lawal, in the Abule Egba Area of Lagos State says she named the girl, Taiwo, and another abducted boy, Kehinde (twins).
Salisu, 42, who hails from Daura, Katsina State, told Punch Metro on Thursday that she lied to her Husband, who she had earlier informed that she was travelling abroad in 2015, that she got pregnant and gave birth to the twins.

Predicting Roulette
Best Things to Do in Cadaques, Beauti…
Building a Talent Pool in a Tight Mar…
Maw Maw’s Old-Fashioned Peach Cobbler
Booty Bay Slot from Push Gaming
PUNCH Metro had reported that the suspect, who disguised as a customer, met the victim’s mother, Damilola Lawal, at a shop in the Abule Egba area and requested some items which were not available.

Two days later, Salisu, who was accompanied by the victim’s mother to get the items in the Agege area. She was said to have escaped on a motorcycle with Fehintola strapped to her back.

Fehintola and another one-year-old boy were rescued from Salisu’s house on Koleade Street, Council bus stop, Idimu.
Speaking with PUNCH Metro at the Lagos State Police Command Headquarters, Ikeja, Salisu said her plan was to adopt the abducted kids to cover up the lie she told her husband that she was pregnant with twins.
She said, “I am from Katsina State, but I have been staying in the South West since I finished my secondary school education in Kano State. I got married in 1992, but I lost my husband in 1993. I met my new husband last year.
“I stay in the Ifo area of Ogun State. My new husband lives in the Matogun area. When I met Fehintola’s parents on that Saturday, I intended to take her away and nurture her as my child. When we went to the supermarket, I did not observe any camera, but I knew there would be cameras there.
“When I fled, I took the girl to my place in Ifo. I lied to my husband in August 2015 that I was pregnant. I told him I was travelling abroad when I realised that he would notice that I was lying. He was the one who drove me to the airport. 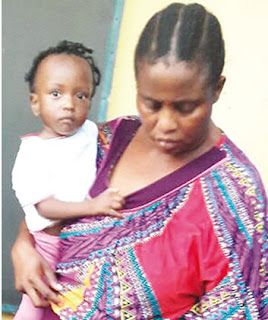 “But I did not travel abroad. So when I stole Fehintola in May, I went to him and told him I was back. I took the girl and another boy to him as my twins.”
Salisu, who finished from a polytechnic in Ogun State, however, denied abducting the boy, saying he was her cousin.

She said, “I told my husband that I had a set of twins. I said they were a boy and a girl. He did not suspect anything until yesterday when the police came to arrest us. I call the toddlers Taiwo and Kehinde. The other boy is related to me.
He is my cousin. The mother is dead, but the father lives in Sagamu. I took good care of both children.” Salisu’s husband, Saheed Akinwale, said he was not aware of his wife’s schemes.
“When she came back in May 2016, I did not ask her any question. She had called me in August 2015 that she was pregnant and was delivered of twins. I did not doubt her. When she came back last month, she brought the children. It was when I saw policemen on Wednesday that I knew she had been lying to me,” he said.
Speaking with PUNCH Metro, Fehintola’s mother, Damilola, said,

“I am grateful to God for rescuing my baby. I am also grateful to the police and the media. Fehintola is my only child. She celebrated her one-year birthday on May 5. This abduction happened on May 16.”
The Lagos State Police Public Relations Officer, SP Dolapo Badmos, said, “We have not reunited the boy with his parents because we have not seen them. We appeal to members of the public to help us locate them. The suspect is a serial child kidnapper and she will soon be charged to court.”