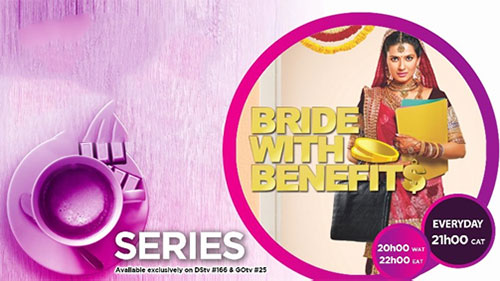 Zee World's new novela Bride with Benefits premieres on the channel tonight (Monday, 2 April 2018) at 21h00 and will air seven days a week as per Zee's schedule set-up.

To find out what it's about, see the TVSA highlight for it here: New telenovela: Bride with Benefits

During a work assignment, Payal discovers something about Rajat that disturbs her greatly. Will she choose to fight for his freedom? Along with this, a family approaches the Rai family with a request that puts Payal under worse pressure

At the anniversary of Dev’s parents a situation arises that causes an intense scene at the function. Upon hearing his tender has been refused, Aditya takes matters into his own hands without knowing he is soon to meet his match

While Jagadev comes up with a sinister plan to become a part of the Rai family, drama waits for him at home after a fight explodes between himself and Goonjun, with serious consequences. Meanwhile, Payal does the unexpected for Rajat

Jagadev is determined to get Dev married off to Payal, will the Rai family fall for his deceitful ways? Dev on the other hand is against the idea as his heart has already been stolen. Rajesh convinces him that he needs to approach this girl.

Friday 6 April 2018
Episode 5
Dev realises his error and apologises to Payal, not knowing his marriage to her is in the process. How will he respond if the proposal is accepted? Meanwhile, Goonjun is suspecting Jagadev of getting up to no good and wants to visit him

It’s a packet of lies as Jagadev tries to cover up his plans with the proposal to Payal. Goonjun visits his house thinking Guddi is getting married. Meanwhile, Payal and Dev meet to talk – can Jagadev prevent the truth from coming out?

Tradition comes in the way of Dev and Payal as Indu forbids them from seeing each other until they are married. Will they find a way around this tradition? Jagadevs’ trouble isn’t over as Goonjun is still convinced of his scheming ways

Rajat gets Dev and Payal into more trouble with Indu when he comes to a wrong conclusion after seeing them together. Indu approaches Payal about a sensitive issue and forces Payal to stand up for own feelings. What will Dev have to say?

Jagadev and family go to worship before the engagement but terror is waiting for him at the temple. More is instore as he arrives at Payals house and learns she can’t make the engagement. Will Jagadev be pushed to show his true colors?

Goonjun tries to take all her belongings from Jagadev thinking she is helping her brother, will Jagadev let Goonjun win so easily? Rajat still suspects that Jagadev is hiding something and gets himself into trouble seeking answers

Jagadev may pay a high price for trying to hide the truth from Goonjun. Again, she returns, this time will she leave with nothing? Payal and Dev’s marriage looks set but Payal receives an order that may just change everything

There seems to be no way out of Payals work order, Balaram feels there is no other option but to call off the wedding. Jagadev tries his own tricks to change this, and Dev tries to find a solution as well. Can anyone prevent this?

Payal requests from Dev that their wedding be simple, but Jagadev has his own ideas. Although Balaram wishes for Aditya and Goonjun to attend to the wedding Jagadev knows this cannot happen, how will he find a way around this?

Hearing that Aditya has left for Mumbai, Dev insists on going there. Aditya promises to attend his wedding but how will he be able to deceive Goonjun and leave her behind? Meanwhile, Payal’s family find it very painful to let her go

It’s the wedding day, and there is nothing but chaos. Rajesh causes an upset when he makes an unusual request. Along with this, Rajesh learns that there is a serious lie that has been told to Payal about Dev – will the truth come out?

Rajesh threatens to let the truth out but Jagadev has plans for him, plans which run the risk of fully exposing his deceit to everyone. Just when Jagadev feels he has got away with everything, an unexpected guest crashes the wedding

The truth is out and it’s bitter for Payal to accept. To make matters worse, Balaram shares a secret with Payal that may make it impossible for her to walk out on this marriage. As the time for vows approach, what choice will Payal make?

Thursday 19 April 2018
Episode 18
Although the marriage has been fixed, Goonjun will not give up this easily. Dev sees that there is something wrong with Payal but he is oblivious to all of what has happened. Will he learn the truth as Payal has?

Upon learning the truth, Dev is highly disappointed with his family, going so far as to make a decision towards Payal that may break her heart. Will Payal break under the pressure and expose her in-laws to her own family?

Saturday 21 April 2018
Episode 20
Dev is prepared to leave Payal at her own home for good, however Payal shares some knowledge with him that causes him to re-think his actions. Goonjun is not done with the Prasad family and lets them have a peace of her mind…

Sunday 22 April 2018
Episode 21
Dev is determined to start off his own coaching career but his loan requests are rejected by every bank he visits, Rajesh suggests visiting a businessman he knows. Dev takes his friends advice, will he finally find success?

Vikas is determined to use Dev as a footing for getting contracts with the PWD. Payal desperately tries to get in touch with Dev to warn him but fails. Vikas decides to visit Dev at home to sign the papers - has Payal run out of time?

After Goonjuns actions, Jagadev burns to pay her back. He does something that causes a rift between her and Payal. Furthermore, Jagadev begs Payal into giving him a lift somewhere, that somewhere may get Payal into a lot of trouble…

Payal can tell that something is behind the scenes with her being at this ceremony. Will she catch Jagadev out? Or has he got away with his deceptions yet again? Dev comes across an exceptional job offer, but is all as it seems?

Payal convinces Dev that the coaching offer is a good opportunity and Dev listens to her. Just as Dev is about to sign the contract, Payal finds out the truth of Mr Atul and tries to tell Dev, but he isn’t available. Can Payal save him?

Jagadev and his family are over the moon when they find out that Payals salary coming in. But will they fall once they find out what she has planned for her salary? But Jagadev has many schemes up his sleeve to make sure he gets the money

Jagadev strategizes on how to get money out of Payal. He hires creditors to come and demand money from him and even takes his lies a step further when Payal sticks to Devs wishes. Will Jagadev come close to dividing her loyalties?

After speaking with Dev, Payal finds a way to help her in-laws with her money. But will her plan work out for the best interests of the family? Once Jagadev gets a sniff of the money he goes crazy and ends up hurting others for it…

Jagadev comes up with a plan to show that Santoshi doesn’t know how to handle money. His plan involves something that Santoshi instantly agrees upon. Things get very tense at the house when this “plan” walks through the front door


Premiere episodes of Bride with Benefits air on Zee World from Mondays to Sundays at 21h00.