Tags: persian persian empire empire greeks
September 4th 2015
View original
When you're the biggest, baddest bully around, you'd think that you would easily crush a group of kids who are in the middle of fighting each other. Unfortunately for the Persian Empire, despite their massive armies and epic military strength, they just couldn't defeat the league of Greek city-states.

The Greco-Persian Wars were a series of conflicts between the Achaemenid Empire of Persia and city-states of the Hellenic world that started in 499 BC and lasted until 449 BC. The interaction between the fractious political world of the Greeks and the enormous empire of the Persians began when Cyrus the Great conquered Ionia in 547 BC. Notably, it is widely believed that the Greeks used Greek Fire to burn Persian ships.

For a background on the governments of each - Persia was an empire, controlling modern-day Turkey, Iran, Iraq, Syria, Lebanon, Israel, Jordan, Egypy, Libya, Pakistan, Turkmenistan, Uzbekistan, and Afghanistan. Sparta, a leading state, was a oligarchy, or sometimes even considered a fascist state, due to their warlike stance. Athens, another leading state, was a democracy, unlike most other states, but a democracy similar to Apartheid South Africa.

By Greek accounts, enmity between Greece and Persia continued for more than two centuries, culminating in the dissolution of the Persian Empire by Alexander the Great; the principal events of the wars, however, unfolded during the two failed Persian expeditions against Greece, in 490 and in 480/479 BC. In 499, the Ionian Greeks rebelled against the expanding Persian empire and asked for help from other Greek cities. The Persian invasion of Greece led by King Xerxes was an attempt to take revenge on Athens for helping the rebellion of the Ionian Greeks. The Greeks united to fight back against the Persian empire

In the Battle of Thermopylae, although the Spartans were up against countless odds and it was rumored that when the Persian archers would fire their arrows it would darken the sky because of their vast numbers, the fighting at Thermopylae during the opening days resulted in heavy casualties for the Persians. The main flaw in the Persians failure to successfully defeat the Greeks positioned at Thermopylae was that they had been taught three things, “to ride, to tell the truth and to use the bow.” 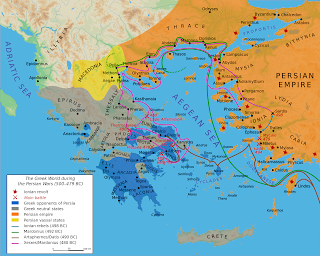 The reason why these methods did not work was because the tight environment had prevented cavalry form charging and being as effective as they would in an open field of battle. They were also unable to use arrow volleys because of the high cliffs and narrow passes at Thermopylae.

Also, the Spartans' famous battlefield tactic was the phalanx formation which required unity in the ranks to repel, arrows, spears and other things thrown at them. The main reason why the Spartans were able to beat back the Persian invasions were because of their highly evolved fighting skills that were impenetrable. 300 Spartans led by King Leonidas were able to hold off the Persians by giving their lives for the freedom and defense of Greece.