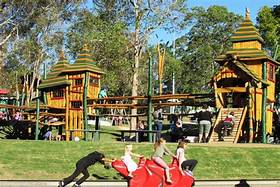 Bad Nanny Sighting in Fort Greene / Clinton Hill Brooklyn - today at the water section of Underwood Park Playground. A Nanny who was in charge of 2 girl toddlers each one maybe 18mos, lifted one child, wearing a hot pink rash guard and matching bottoms , had dark straight hair and bangs, into the sprinkler and held her there until she was completely drenched despite the girl's screams of protest.

Then the nanny proceeded to dump bucket after bucket into the little girl's face as she screamed and held out her arms to her caregiver, who kept dousing her. About 20 adults averted their eyes while this was happening . ONE MOM came over and asked why the little girl was screaming. The nanny said " I HAVE NO IDEA" At which point I said firmly but not with a raised voice to the nanny " She is crying because you are throwing water in her face"

The nanny got one foot away in my face screaming that it was HER CHILD ( while anything is possible this was unlikely as the little girl was Caucasian and the nanny was dark skinned with a Caribbean accent, so I do not believe she was the parent and it was HOT so of course she threw the water on her. i said, " No that is not your child, it is someone else's child and this is your job. You are supposed to be taking care of her not throwing water in her face when she is clearly terrified"

Then another nanny came up and started screaming at me that white nannies need to mind their own business. The original nanny whipped out a phone to record the other nanny telling me I am racist and would not have minded a white nanny throwing the water at the girl. I insisted I would have protested no matter who did it even the parents. They kept on and on about it not being my business but I feel that child abuse is everyone's business, the girl was choking, terrified, could not walk away or even talk.

This was absolutely violence against a baby and I did wish to call the police but became intimidated by multiple nannies loudly attacking me for the perceived attack on their ethnicity and minding my own business but what I saw haunts me - what would that nanny do privately if she would do this to her charge in public. How can this little girl have a voice with caregivers like that? I want so much to help this little girl. I have given my number to ISYN, i will speak with anyone about what i saw - TU