How will Trump handle probes in his big speech? 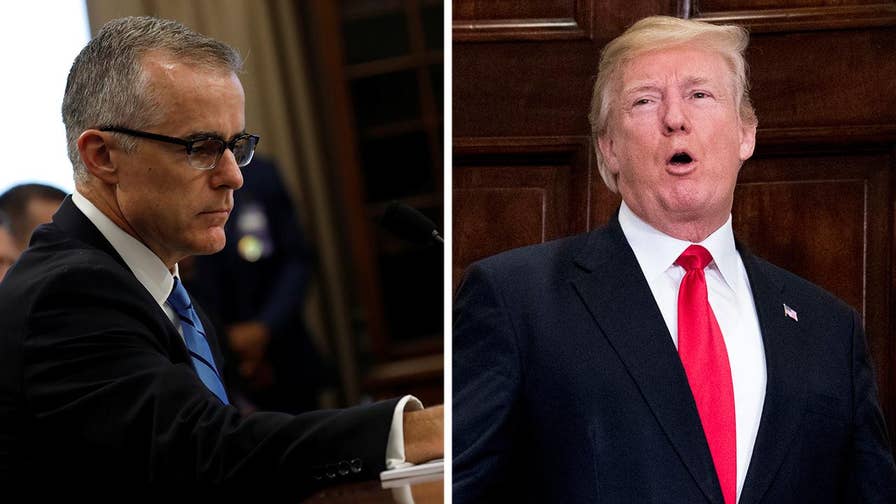 McCabe news a distraction from Trump's State of the Union?

**Want FOX News Halftime Report in your inbox every day? Sign up here.**
On the roster: How will Trump handle probes in his big speech? – Pennsylvania special House race heats up – Pressure on GOP over Wynn cash – In Otter news… – That’ll do, donkey. That’ll do.

HOW WILL TRUMP HANDLE PROBES IN HIS BIG SPEECH?
Richard Nixon made a lot of history as president, as you may have heard.
But did you know that of all the singular achievements and failures of his extremely consequential presidency, he was also the last president to not deliver a State of the Union address in person to Congress.
Since Franklin Roosevelt revived the practice in 1934, every president, every year has made the big speech, except Nixon.
Now you may know that 1973 was not exactly a friendly, happy, fluffy bunny of a year for the 37th president. He was already deeply at odds with Congress over the investigation into the 1972 election, including him and his CREEP crew. Rather than dignify the legislative branch with his visit, Nixon shunned the speech and sent written messages instead.
A year later though, Nixon was focused on a strategy to finally emerge from his Watergate malaise and took the fight to Congress. Nixon made clear that he had “no intention whatever, of ever walking away from the job that the people elected me to do.” But, Nixon also made clear that he would cooperate with the House Judiciary Committee.
We all know how that one turned out…
Twenty-five years later, it was Bill Clinton’s turn to give the big speech under the clouds of a scandal. In 1998 news of the president’s affair with a 21-year-old White House intern had broken just days before. You can probably guess what Clinton had to say about it: absolutely nothing.
Even in 1999 when Clinton was smack in the middle of his impeachment, the Big Dog didn’t woof or whine even a bit about the subject.
So what will President Trump do on Tuesday in his first State of the Union address?
It’s hard to imagine that Trump would do anything like Nixon’s darkly personal confession of his turbulent year and far more likely that he will follow the precedent of his fellow bologna wholesaler Clinton, at least as it relates to the actual special counsel investigation into the 2016 election and his campaign.
But Trump may not be able to escape related issues entirely.
Trump has been waging war on his own Justice Department for months, and Congressional Republicans have joined the attack with the gusto of raccoons in an open picnic cooler.
Usually it’s the opposition party that creates a crisis of confidence surrounding a cabinet member, but in this case it’s actually Republicans who have fatally undermined Jeff Sessions’ credibility.
There’s much that Trump needs Congress to do right now, and he surely must be tantalized by the possibility of an immigration deal that would flip the script on his presidency. Having learned what it takes to get legislation passed, Trump undoubtedly wants some more of it.
But given all of the attention, some of it quite hysterical, being paid to alleged corruption in the Justice Department and Trump’s own suggestion that the FBI crookedly helped Trump’s 2016 rival escape prosecution can Trump address Congress but not address the elephant in the room?
When the termination of an FBI official unknown to all but a few just a year ago causes a five-alarm fire, it’s a sign of the country’s preoccupation with both the special counsel investigation and the Republican’s investigation of the investigation.
Trump could either try to help Sessions by making brief remarks praising the Justice Department, including Sessions and FBI Director Christopher Wray. That could go a long way toward calming anxious voters concerned that some purge might be underway.
If Trump is silent on the subject of his Justice Department and the probes upon probes from which we are all now waiting to see results, it’s probably safe to assume that Sessions really is out of time.
THE RULEBOOK: THE BEST AND THE REST
“This piece of history proves at once the inefficiency of the union, the ambition and jealousy of its most powerful members, and the dependent and degraded condition of the rest.” – Alexander Hamilton and James Madison, Federalist No. 18
TIME OUT: AN UNCOMMON MAN
On this day, in 1737, political theorist and American Patriot Thomas Paine was born. About 40 years later, he anonymously published his pamphlet, “Common Sense,” in which he strongly encouraged Americans separating from Great Britain. In his memory, we share a piece from his written work: “But the injuries and disadvantages which we sustain by that connection, are without number; and our duty to mankind at large, as well as to ourselves, instruct us to renounce the alliance: because, any submission to, or dependence on, Great Britain, tends directly to involve this Continent in European wars and quarrels, and set us at variance with nations who would otherwise seek our friendship, and against whom we have neither anger nor complaint. As Europe is our market for trade, we ought to form no partial connection with any part of it. It is the true interest of America to steer clear of European contentions…”

Chris Stirewalt joined Fox News Channel (FNC) in July of 2010 and serves as politics editor based in Washington, D.C.

The post How will Trump handle probes in his big speech? appeared first on Shareabler.

This post first appeared on Shareabler, please read the originial post: here
People also like
Fallkniven F1X Elmax
How To Keep A Patio Cool – Beat The Heat
Why SEO Is The Next Big Thing in the Real Estate Industry
Witnessing an Aggressive Event

How will Trump handle probes in his big speech?