What Would It Take for Amazon to Accept Bitcoin? 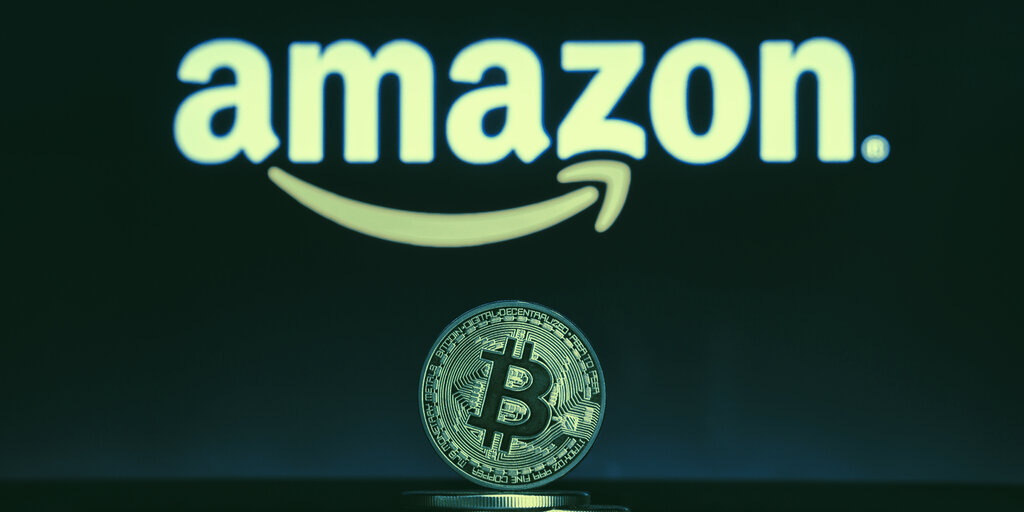 With annual revenues of $280 billion, Amazon is a global juggernaut of e-commerce. To date, however, it’s shunned Bitcoin and other cryptocurrencies as payment methods (though it’s more than happy to sell you goods emblazoned with the Bitcoin logo).

For Bitcoin advocates, the prospect of the world’s biggest e-commerce company accepting Bitcoin payments is a tantalizing prospect—one that would signal mainstream acceptance of cryptocurrency and propel a new wave of Bitcoin adoption.

Amazon has a massive 47% market share of the US e-commerce retail market, with net revenues in excess of $280 billion (as of 2019), and plays host to over 150 million Prime users worldwide. And that's just Prime. While undisclosed, Amazon's user base is undoubtedly much higher. The number of Amazon Prime members in Q4 2019. Source: Statista

As luck would have it, millennials, who count themselves as some of Bitcoin's biggest fans, also have an affinity for Amazon—outpacing Baby Boomers, Gen X, and Gen Z when it comes to membership.

So, with over 150 million known customers—many of whom come from a demographic that’s enthusiastic about cryptocurrency—it seems like Amazon accepting Bitcoin payments should be a no-brainer. And yet, from as far back as 2014, Amazon has refused to accept Bitcoin. So what’s the hold-up?

The barriers to Amazon adopting Bitcoin

There are, it turns out, plenty of obstacles—not least of which is Bitcoin's notorious volatility.

"To directly take Bitcoin as a method of payment, Amazon would have to build processes and procedures to accept, hold and manage Bitcoin and thousands of other cryptocurrencies," Sean Rolland, director of product at BitPay, told Decrypt.

"They would have to assume the inherent market volatility risks associated with holding crypto on their balance sheet and selling crypto to/through a crypto exchange in exchange for fiat currency," he added.

It's fair to say BitPay knows a thing or two about accepting Bitcoin; after all, the firm provides Bitcoin payment services for thousands of businesses worldwide. Indeed, BitPay also provides a way to buy on Amazon using Bitcoin, albeit indirectly, through purchasing prepaid gift cards using the cryptocurrency. But Rolland points out that the potential hiccups run deeper than just volatility; some of the biggest obstacles include keeping up with all of the technical aspects.

Node support, chain management, accepting payments from custodial and non-custodial wallets, and even supporting more crypto coins that their users will inevitably ask for are all issues Amazon needs to consider, argues Rolland.

Compliance with differing regulatory jurisdictions is likely also a source of anxiety for the global retailer. But for Danny Scott, the founder of Bitcoin services hub CoinCorner, the biggest turn-off is Bitcoin's inability to scale.

Bitcoin Is Not (Yet) Technically Compatible With Mass Adoption

"From a payment perspective, Bitcoin isn't quite ready for that level of scale," Scott told Decrypt.

Amazon achieved an estimated 636 transactions per second (TPS) on Prime Day 2016—a record-breaker for the firm. At present, Bitcoin can only muster around seven TPS. This scarcely represents a drop in the ocean compared to payment processors such as Visa and MasterCard, capable of handling around 65,000 TPS.

If you thought EOS was gonna be big...1 million TPS?

Lighting Network is going to give Bitcoin MAINSTREAM payment potential.

In its current state, however, not even Lightning is in a position to facilitate the likes of Amazon.

Does PayPal's entry change anything? Although some crypto enthusiasts expressed disquiet at PayPal’s policies, which prevent crypto being transferred out of the company’s digital wallets, the move was seen as a powerful signal of mass cryptocurrency adoption. The company also neatly circumvented issues around Bitcoin’s volatility by automatically converting crypto payments to fiat at the point of sale.

With PayPal having dipped its feet and setting a precedent,  Rolland submits that the notion of accepting Bitcoin will become too difficult for others to resist.

"PayPal deciding to offer crypto for sale means that more consumers will have crypto to spend online, especially when the price of Bitcoin and other coins increases," he explained. "Merchants, including Amazon, will want to be ready to accept crypto as a payment means in order to capture sales."

Bitcoin $16k as the crypto run continues. Let’s be real. PayPal square and Shopify get together and boom crypto has utility. People figuring this out. Amazon takes bitcoin. It’s all over... bullish on crypto. $pypl $sq $shop $amzn

"It also reduces high fees and increases payment transparency and efficiency," he adds. "Cryptocurrency is valuable because it is used to trade for goods and services on a global basis without the risk of fraud or identity theft."

Scott agreed, telling Decrypt, "It's only a matter of time before Amazon accepts Bitcoin."

"It's only a matter of time before Amazon accepts Bitcoin."

In 2013, Amazon snapped up the domain name amazonbitcoin.com; four years later it added the domains amazonethereum.com, amazoncryptocurrency.com and amazoncryptocurrencies.com. For the moment, those addresses simply redirect to the main Amazon.com homepage; but it shows that Amazon is, at least, aware of the potential of cryptocurrency and staking out its territory, just in case.

For Scott, the first step might not see Amazon accepting Bitcoin payments, but following in the footsteps of MicroStrategy and Square, who recently joined the list of public companies holding over $6.7 billion in Bitcoin. "This may be years away yet, but it's becoming inevitable that global companies will all begin to have exposure to Bitcoin in some form," he said.

The pace of institutional investment in Bitcoin has quickened in recent months. In February 2021, the crypto space was rocked by the news that electric vehicle manufacturer Tesla had bought a staggering $1.5 billion into Bitcoin as part of a new investment policy.

As arguably the most significant corporation yet to directly invest in Bitcoin, Tesla sent the price of Bitcoin skyrocketing to its highest-ever value on the news of its investment. Pundits queued up to announce that Tesla's investment would be the pebble that set off an avalanche of institutional investment in Bitcoin.

"You have @ElonMusk @michael_saylor @jack. You're going to see a lot of other visionary leaders and disruptive companies actually realizing it has really moved from why to why not," says @sonnenshein on corporations investing in #bitcoin pic.twitter.com/6FnwEjGFNL

What's more significant, from Amazon's point of view, is that Tesla will become the first major car manufacturer to accept Bitcoin as payment for its products on a “limited basis”. This means that it'll soon be possible to purchase a Tesla automobile with BTC—at least for some people. Tesla also left open the possibility of holding onto Bitcoin from customer purchases, rather than converting it into fiat at the point of sale.

However, though Tesla is the first major firm to accept Bitcoin for its products, Amazon isn’t likely to follow in its stead any time soon. For one, Amazon typically operates on a razor-thin profit margin for its online shopping platform, with a net margin of around 5.5% in 2020—just slightly higher than Bitcoin’s average 60-day volatility. That would likely preclude Amazon from holding customers' Bitcoin following transactions.

Amazon could, of course, use a cryptocurrency payment gateway to automatically settle Bitcoin payments in fiat—but that would mean losing a small chunk of each sale at the same time.

Since Bitcoin is a direct threat to its own payment processing service—known as Amazon Pay—it's unlikely that the retail giant would fold in a payment method that it has little control over.

Certainly, it's not out of the realms of possibility that Amazon would choose to walk before it can run, onboarding Bitcoin first as a store of value before rolling it out to retail. But as far as accepting payments in Bitcoin, Amazon may choose to play the long game, waiting until the kinks in the system are ironed out by early adopters like Tesla.

There was further change in the air in February 2021, with the news that Amazon CEO Jeff Bezos was stepping down, taking the title of executive chairman and handing the reins of the e-commerce giant to Andy Jassy. Jassy's appointment quickly drew attention from crypto advocates; in his previous role as head of Amazon Web Services, he introduced Amazon Managed Blockchain, a service for Hyperledger Fabric and Ethereum (Preview) developers.

While Jassy has past experience working with blockchain, he's not a starry-eyed advocate of the technology; speaking at a 2018 AWS keynote, he said, “We just hadn’t seen that many blockchain examples in production or that couldn’t pretty easily be solved by a database.”

But that doesn’t mean Amazon isn’t planning on throwing its hat into the cryptocurrency ring. If recent job filings are anything to go by, Amazon may be set to launch its own digital currency project in Mexico in the near future. Though details are scant at the moment, it appears the new digital currency will be directly converted for cash, and will be used to pay for goods and services on the platform.

Although "digital currency" could refer to any number of payment methods, it's a sign that Amazon is open to experimenting within the space—and could herald more significant moves from the e-commerce giant.

A Guide To Visiting Antigua, Guatemal…
Beard Bib – Solution For Messy Groomi…
Will there be homeless people in Heav…
Oasis Space – Upright Walker with Sof…
Alleged Hitman Records Himself Counti…


This post first appeared on Passive Income With NFTs, please read the originial post: here
People also like
A Guide To Visiting Antigua, Guatemala: The Best 5 Things To Do And See
Beard Bib – Solution For Messy Grooming
Will there be homeless people in Heaven? Who cares?
Oasis Space – Upright Walker with Soft and Wide Cushioned Seat
Alleged Hitman Records Himself Counting Cash After A Murder-For-Hire In Miami
Top Sites Where to Buy Bitcoin in Australia

What Would It Take for Amazon to Accept Bitcoin?