Tags: young lovers house young
May 5th 2018
View original
The mystery surrounding the death of two Young Lovers in Delta state is yet to unraveled by police authorities. 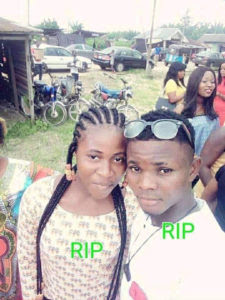 According to reports, a boyfriend and girlfriend were found dead yesterday morning in the apartment of a friend where they went to sleep in Mosogar, Sapele area of Delta state.
According to Sapele Oghenek, the pair identified as Matthew and Bose were said to have gone out to buy Suya on Thursday night before the boyfriend took Bose to his friend’s House whey they went to sleep.
The owner of the house and his girlfriend was said to have slept in the room while Matthew and his girlfriend Bose slept in the parlor.
Their friend was reportedly shocked to have woken up the next morning and discovered that the Young lovers had died in the parlor.
Their corpses have been deposited at the mortuary and the owner of the house detained by the police.
According to reports, some people are saying the pair may have died from the Suya they ate the previous night while others are saying they may have died after inhaling generator fumes.
Whatever the case might be, may their souls rest in peace.

Are You Ready To Go On An Adults Only…
Why SEO Is The Next Big Thing in the …
The Queens of Pop: In The Mix
30 Cheap & High ROI Home Renovations …
Telegram Marketing solutions