Azerbaijan could become a gas hub in a Caspian and has opportunities for developing LNG projects according to Claudio Steuer (pictured below), founder, and director of SyEnergy, a UK-based energy consultancy focused on gas with more than 30 years of experience in the area.

GetResponse Review-How to Setup
Best 3D Animation Software: The Top 1…
Caitlin Long on the Wyoming Blockchai…
How to Love Mondays and The Rest of T…
What are Your Critical Numbers?

"My initial idea of seeing such a project through is to try to build on something that has been done before, on existing infrastructure, to minimise the costs and challenges. I refer to the Baku-Tbilisi-Ceyhan oil pipeline and the Southern Gas Corridor (SGC). There is also a good relationship with Turkey, which I think will be interested in the project too," he said, expanding in an interview in July on a presentation he gave at a conference in June, organised by Iteca Caspian.

The idea is to construct a gas pipeline from Erzurum to the port of Ceyhan, where an LNG plant will be built. From the Mediterranean, it would be possible to deliver LNG to any country with a receiving terminal. The distance from Erzurum to Ceyhan is about 800 km so it will be feasible to build the line along the Baku-Tbilisi-Ceyhan route, and it could cost around $5bn. The LNG plant in Ceyhan requires an investment of $20bn to $30bn depending on its capacity.

NGW: Do you believe there will be support for such a project? The SGC, even though it is backed by the EU and the US, faces a lot of challenges.

Europe will support it. Why? There are two main reasons. It will see it as SGC Mark II, but with an added flexibility. This will be a different way to support the expansion of SGC without having to build another 3,500-km pipeline.

Let's think of LNG as a flexible pipeline. You can transport it to any country that has onshore terminal or floating production, storage and offloading unit. Over the past 10 years, the number of countries that have become LNG importers has more than doubled because of the lower cost and availability of terminals.

And now you will have Caspian LNG, which means more European countries will benefit from the project by receiving Caspian gas in their LNG terminals.

I believe European communities will support it as an opportunity to increase energy security, to diversify route of supply and type of supply. Another word, its support for it will be even stronger. 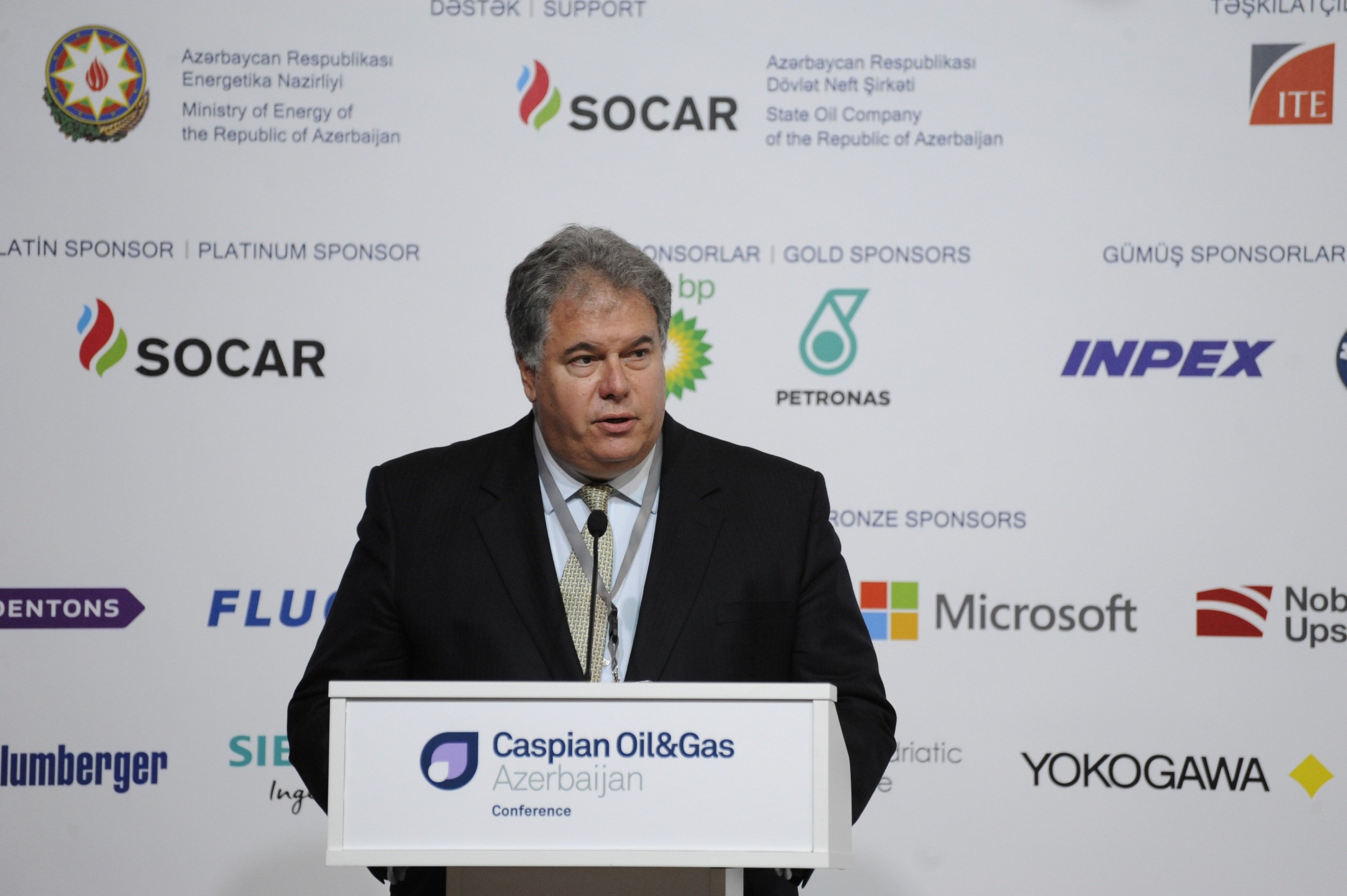 Portugal, Spain, France, and the UK are not benefiting directly from SGC.  Only politically, as it reduces dependence on Russian gas for Europe. With Caspian LNG this would change.

For example, Spain buys around 55-60% of its gas from Algeria.  But it doesn’t want to depend too much on Algeria for the same reason - it gave too much power to Algeria. So Spain is always looking for other options – Trinidad, Nigeria. Potential gas supply from Caspian would be an additional opportunity for Spain.

NGW: As you say, there are several LNG suppliers to Europe, do you see the place for Caspian LNG in this market too?

Absolutely, because it is close. The cost of shipping LNG from Ceyhan to Europe will be very small. LNG from Trinidad or Nigeria travels thousand and thousands nautical miles, while the distance from Ceyhan to Barcelona is much shorter.

NGW: What about Turkey and the US?

I think Turkey would be interested because it provides good economic value for the country: the construction in Ceyhan, a profit from the port from coming and going ships. Also, Turkey already has three LNG receiving terminals and there is the option for a fourth. It helps to bring consumption into the area without a lot of gas infrastructure. Turkey would be able to buy some LNG from Ceyhan too. So, this concept has many positive elements for Turkey.

Regarding the US, I don’t know, as it plans to compete in LNG business. The question is, do you really need US support? It is nice to have, but not having it does not kill the project.

NGW: Azerbaijan has made significant financial commitments to the SGC, primarily for  the Trans-Anatolian pipeline (Tanap). It always said that it is considering expanding the $40bn SGC. Do you believe it will consider another expensive project?

A potential Azerbaijan-Turkey LNG project in Ceyhan has significant advantages over additional long distance pipelines of 3,500 km. With an 800-km gas pipeline from Erzurum to Ceyhan following along the same right-of-way of the oil pipeline, the investment in the gas pipeline and compressor stations would be optimised. The Baku-Erzurum portion of the pipeline would probably need to be expanded, looped and/or compressed, but this additional investment would probably be necessary for incremental sales into Tanap and TransAdriatic Pipeline anyway.

A world-scale LNG plant at Ceyhan would benefit from the existing oil terminal location with significant options to site the plant. Ceyhan offers a strategic location with which to reach Turkey’s LNG terminals and the whole of the Mediterranean and Europe which you simply cannot reach with additional SGC capacity.

The LNG shipping distances from Ceyhan to other promising Atlantic Basin markets such as Northeast Brazil and the Caribbean area are competitive with those from east Africa. This operational and commercial flexibility and access to lower credit risk LNG buyers are simply not possible from the SGC. Azerbaijan and other Caspian producers will benefit with flexibility with gas sales too. For example, if gas consumption will decline in Turkey, LNG could be delivered to other markets.

Azerbaijan’s Socar demonstrated leadership and innovation in pursuing the Malta LNG and Power project and another opportunity in Ghana without access to LNG. Imagine what SOCAR could do if it had access to equity LNG right on the Mediterranean?

NGW: Do you see enough gas resources for such a project?

You just need 20 trillion ft³ of gas for a 20mn mt/yr LNG project. The Caspian region contains about 60% of world gas reserves. Of course, the main part of it belongs to Russia, Iran also holds large gas reserves. But still, there are significant reserves in Turkmenistan, the South Yolotan field alone contains 419 trillion ft³ gas in place. Kazakhstan can export gas too if it has the market. Currently, it is being injected into a reservoir to maximise oil production, for instance in Kashagan. The North Caspian project has at least 30 trillion ft³ that can be exported. So if producers have export options, I’m sure Kazakh gas will also be available. In Azerbaijan Shah Deniz 3 as well as nearby projects could potentially be the source for LNG project.

NGW: You said Azerbaijan could become a gas hub in Caspian…

Azerbaijan already has all key elements of the gas hub such as production, processing, storage, local sales, and export. The only thing missing is gas transportation with the other Caspian countries. If put it in place other Caspian states could have an opportunity to contribute gas for export westward.

A construction of the subsea gas pipeline across Caspian is still a sensitive problem considering an unresolved issue of the status of Caspian and opposition of Russia and Iran. But marine compressed gas project (CNG) could be a good solution. Marine CNG means having a floating flexible pipeline and you don’t need to ask other littoral states permission for it.

Only a governmental agreement between the countries involved – Azerbaijan, Turkmenistan and Kazakhstan – is missing.

NGW: Italy’s Eni made a similar proposal on exporting CNG from Turkmenistan to Azerbaijan in 2010.  But the idea has never been realised. In your opinion why would be different this time?

Despite being technologically and commercially feasible, it probably did not move forward because Azerbaijan was still in exploratory discussions with a couple of alternative projects for the SGC and would most likely give priority to Azeri gas before agreeing to receive Turkmen gas.

The business environment today is different in several aspects as oil revenues are significantly down and gas is the only fossil fuel with significant growth for the next two decades; SGC is almost complete; the geopolitical tensions around Caspian are less critical as Iran and the West are in rapprochement mode. Marine CNG technology has evolved in the last ten years with lighter and stronger materials reducing the weight of vessels and the overall ship cost.

NGW: It could take time for Caspian nations to come to an agreement.

Maybe the best way would be for Baku to do the first phase by itself if there is enough gas for that. Of course, with the help of the European community, the major players in the oil and gas business in Azerbaijan, and in co-operation with Turkey.

Then it can build on it. Additional gas markets will add value and intensify gas production in Azerbaijan and other Caspian countries, that want to have access to gas markets as opposed to having just Russia and China. If the first phase happened with the amount of gas in Turkmenistan and Kazakhstan it will be easy to expand it further and make a global LNG project.

You may have been living with a sneaky killer: Learn the dangers of asbestos

How To Plan For Exhibition Succcess