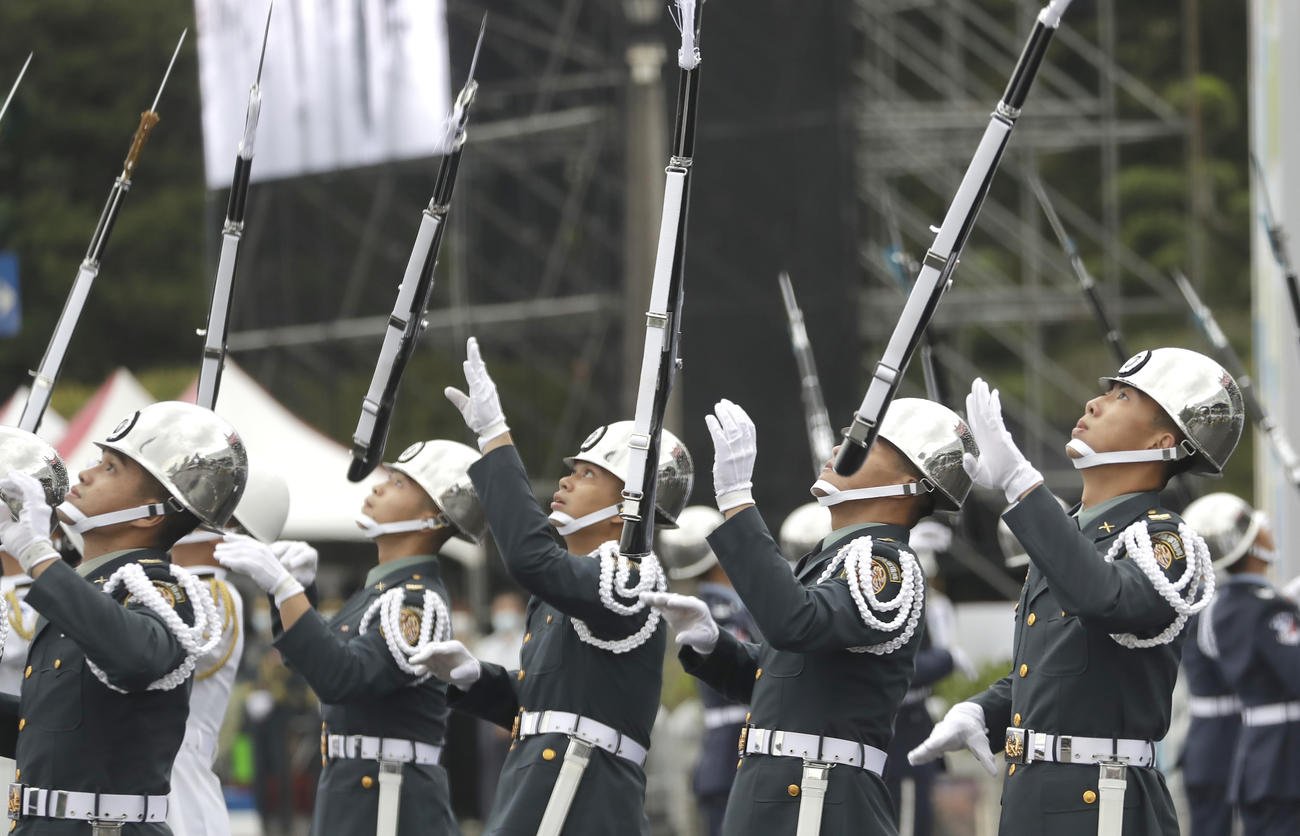 TAIPEI, Taiwan — China’s threats of military action against Taiwan are “absolutely not an option” and will “only push our two sides further from each other,” Taiwanese President Tsai Ing-wen said Monday.

“I want to make clear to the Beijing authorities that armed confrontation is absolutely not an option for our two sides,” Tsai said. “Only by respecting the commitment of the Taiwanese people to our sovereignty, democracy, and freedom can there be a foundation for resuming constructive interaction across the Taiwan Strait,” she said.

The holiday evokes Taiwan’s endurance as a separate political entity with a thriving democracy and free press. Generally known as “Double Ten” in Taiwan, it commemorates a 1911 uprising by troops in the Chinese city of Wuhan that eventually led to downfall of the Qing Dynasty. China’s Communist Party swept the Nationalist government from the mainland amid civil war in 1949 and continues to claim the Island.

In response, Foreign Ministry spokesperson Mao Ning reiterated China’s long-held stance that “Taiwan is …. not an independent state and has no so-called president.”

“The root cause of the current tensions in the Taiwan Strait is that the (ruling Democratic Progressive Party) authorities have been clinging to Taiwan independence and colluding with external forces to make provocations,” Mao told reporters at a daily briefing. “We are ready to create a wide space for peaceful reunification, but will never leave any room for secessionist activities of Taiwan independence.”

Tsai’s speech focused largely on Taiwan’s success in strengthening the social security net for an aging society and growing its high-tech economy despite the pandemic.

But she also emphasized Taiwan’s efforts to protect itself, with increased imports of foreign hardware, revitalization of its domestic arms industry and upgraded training for reserves. Tsai singled out Taiwan’s submarine development program and the delivery of its first domestically developed and constructed 10,000-ton landing platform dock, Yushan, as particular successes.

Russia’s war on Ukraine has refocused attention on China and on ways Taiwan can resist a much larger and more powerful foe equipped with the world’s largest standing army and a huge arsenal of missiles.

That was further underscored when China launched threatening military exercises around the island in response to a visit to Taiwan in early August by U.S. House Speaker Nancy Pelosi.

Beijing sent ships and planes across the midline of the Taiwan Strait that had long been a buffer zone between the sides in what was seen by some as a rehearsal of a blockade that could presage an attack. The U.S. has warned against such an action and Taiwan’s defense chief said the island has sufficient resources to resist an attempt to cut it off from the outside world.

China also declared testing zones around the island in some of the world’s most heavily traveled shipping lanes and fired at least four missiles over Taiwan, some of them landing in Japan’s exclusive economic zone.

Japan issued diplomatic protests over the missile firings and signed on to a statement from the Group of Seven industrialized countries criticizing the war games.

Despite Beijing’s threats, U.S. and other foreign diplomats have continued to visit Taiwan and Washington’s commitment to Taiwan’s defense appears only to have grown.

Although Taipei and Washington have no formal diplomatic relations — a concession made to Beijing on the establishment of official ties in 1979 — U.S. law requires that Taipei has the ability to defend itself. It also requires Washington to regard all threats to the island as matters of “grave concern.”

That commitment rests on a concept of “strategic ambiguity,” whereby Washington insists Taiwan’s status must be resolved peacefully but does not say if U.S. forces might be sent in response to a Chinese attack.

As China has ramped up its threats, that concept has eroded. President Joe Biden, in a CBS “60 Minutes” interview last month, said that “U.S. forces, U.S. men and women, would defend Taiwan in the event of a Chinese invasion.”

The White House said after the interview that U.S. policy toward Taiwan hasn’t changed.

China, meanwhile, refuses to acknowledge Taiwanese self-determination or recognize Tsai’s government. The two sides have not had any formal contacts the first of her two terms began in 2016.

Apart from military threats, Beijing blocks Taiwan from participating in international health, economic and cultural forums and has banned some imports from the island in apparent violation of World Trade Organization rules.