IOT is taking over our lives! 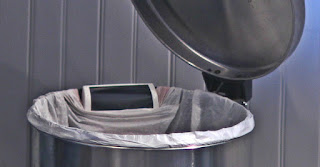 It looks like IOT will be closely affect our lives. The internet of things will be something that we will live and breath. Everything you see will no longer be an ordinary boring object. Those objects will become smart objects. Anything can be smart with the use of IOT technology. So I was scrolling the web and I discovered a start up project called "Genican" on the IoT News Network. The Genican really took the whole concept of IoT having the ability to make anything a smart object very literal. Genican is a smart garbage that can keep track of what you throw away. You simply latch the Genican onto your garbage can and it works as a barcode scanner. Scan whatever you throw out and Genican will add it to your grocery list on the Genican app. This may seem silly at first, but if you think about it; the Genican can and will be very useful. Lets say you finish the last box of cereal. Scan it on the Genican and that box of cereal will be added to your shopping list. Now when you go shopping for groceries, you can see that you ran out of cereal. I love this concept because everyone forgets what their inventory of food looks like. This eliminates the problem of keeping track of what you need more of.

Rating: Worth Checking out!

IOT is taking over our lives!