Twins, one white and one black, get ready to start middle school: "I notice people doing double-takes" 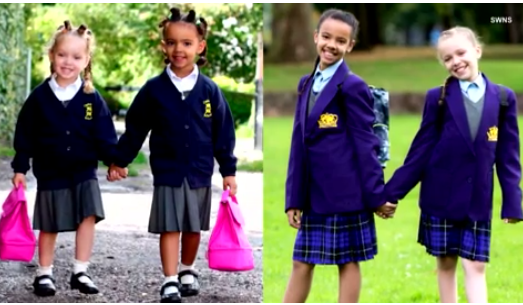 11-year-old twin sisters Millie and Marcia are about to start secondary school and as always, people are finding it hard to believe they are twins due to their physical differences - one is white and the other is black.

Marcia and Millie Biggs, from Birmingham in England, looked almost identical when they were born in July 2006 but their difference in skin tone became more apparent as they grew older. Brown-eyed Millie started to become darker skinned, taking after her Jamaican father, while blue-eyed Marcia became lighter skinned like her white mother and grew blonde, curly hair. 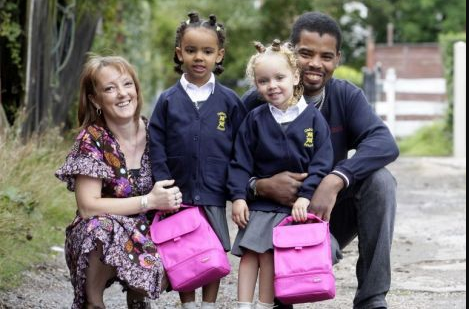 The twins' father Michael Biggs told SWNS: "Within a few months, the changes started to happen. Millie started to suddenly get darker, and we thought that the same would happen to Marcia. I thought to myself: 'No problem - one black, one white.' We never worried about it, though, we just accepted it."

Ahead of the girls' first day at secondary school this week, their parents had to explain to their teachers that they were in fact twins. Some of their teachers were shocked, and strangers are often baffled when they find out the girls are related, much less twins. Their mother Amanda Biggs said: "I'd be picking them up after school, and the other parents would stop me and say: 'Are they your daughters?' When I told them that they were twins, they would always be stunned. I notice a lot of people doing double-takes."

Other than Marcia and Millie’s difference in skin tone, their mom says their features are quite similar.

Amanda Biggs continued. "They look almost exactly the same. They are both absolutely beautiful, and they make me proud every day. They do absolutely everything together."

Millie is the bossy one and loves princesses and dolls. She's more of a girly girl while Marcia is more of Tomboy, their parents note. The twins are both very sociable, however.

"They're both very outgoing and positive, which is wonderful. They're great to be around because they always make you smile. I've devoted my whole life to looking after them, and I've treasured seeing them grow up together," Amanda Biggs said.

Amanda Biggs is sometimes irritated when people question if her girls are really twins but it doesn’t seem to bother the girls much.

"It makes me laugh a lot when people don't believe that we're twins," Millie said

Below is an interview with the twins ahead of their first day at secondary school.

Twins, one white and one black, get ready to start middle school: "I notice people doing double-takes"