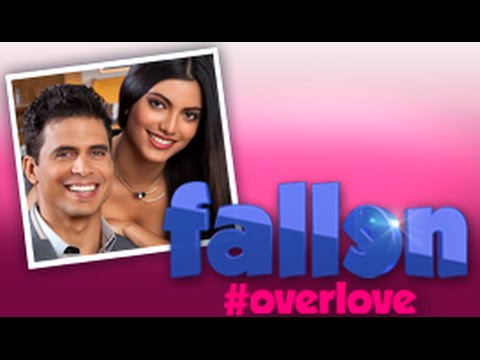 Coming up on Fallen Over Love this June 2017:

Matilda tells Livi that she should be with someone like Armando. Elsewhere, Arantza tells Georgina the man who hit her was Theo but Georgina doesn't believe her.

Rodrigo and Matilda run into each other at college, their feelings are so strong they can't stand being apart. Elsewhere, Doroteo is fired from the lumber yard because he hit Arantza.

Michelle and Mateo are growing apart. Elsewhere, Geo is overwhelmed at all the bills she has to pay; she can't sleep because she keeps thinking about Theo's proposal.

After Matilda's reaction over the poem and the bouquet of flowers, Armando is expecting her to tell him that she wants to be with him. Meanwhile, Matilda thinks being with Armando will make her forget Rodrigo.

Rodrigo tells Matilda that he knows she doesn't live where she told him she does as he went to see her and she wasn't there. Later, he follows Matilda to her real neighbourhood.

Rodrigo can't work out why Matilda, a rich girl, travels by bus and shops in cheaper stores. Elsewhere, Rómulo is sad because his divorce will come through in a month.

Michelle has a job interview with Juan Ramón and Mateo reproaches her for making herself look pretty for it. Elsewhere, after a night out Rodrigo offers to walk Matilda home.

Matilda is worried because Rodrigo wants to take her home, but Stefi calls him because she thinks someone broke into her house. Later, Rodrigo arrives home and tells his mother that he wants to marry Matilda.

Rómulo thinks that after making love with Aidé she was going to change her mind about the divorce, but she doesn't. Elsewhere, Arantza is mad with Rodrigo for standing her up in the parking lot.

Doroteo proposes to Georgina at a beautiful restaurant and gives her an engagement ring. Elsewhere, Gerardo is caught by the police driving a stolen car.

Michelle and Juan Ramon feel attracted to each other but fear that once they start they won't be able to stop it anymore. Later, Brela tells Aide that her son was sent to prison, but she lies about the reason.

Rodrigo decides to go and face Arantza to finish things for good, but Brela tells Matilda that Rodrigo took his new girlfriend to his house because he seems very in love with her.

Aidé cries over Rómulo, luckily Santiago is there to comfort her and tell her that she's a great woman. Later, Matilda decides to tell the truth to Rodrigo because she can't keep lying to him.

After spending the day together, Matilda and Rodrigo realise that they can't live one without the other. Elsewhere, Geo goes on planning her wedding, ignoring that Theo has no money at all.

Armando picks up Estefanía and they go out together. They kiss and she confessed to him it's the first real kiss she's ever had. Elsewhere, Rodrigo tells Matilda that he doesn't believe in marriage.

Matilda takes Rodrogo's comment about marriage the wrong way and he explains to her it's because his parents have just got divorced. Later, Rómulo tries to convince Aidé that the divorce was a bad idea.

Matilda is scared as she thinks she might be pregnant and is afraid of Rodrigo's reaction. Meanwhile, Georgina and Aidé talk about the wedding.

Georgina and Doroteo's wedding is finally going to take place and everyone is there, even Matilda and Rodrigo, who aren't aware their partner is in the church...

Livi insists on Matilda taking the pregnancy test but she's afraid of what the results might be. Elsewhere, Theo decides to fight for Georgina.

Livi shows Matilda the pregnancy test and it's negative, they both celebrate. Later, Brela finds drawings of Matilda in Rodrigo's room and all her suspicions are confirmed.

Doroteo tries to fix his situation with Georgina but she, far from forgiving him, tells him she'll start the divorce papers. Meanwhile, Matilda is very upset after talking with her older sister and feels let down.

Rodrigo hasn't had news about Matilda for several days and that worries him. Elsewhere, Matilda can't stand lying anymore and decides to put an end to the charade.

Coming up on Fallen Over Love this July 2017:

Matilda wants to meet Rodrigo to tell him the whole truth and break up with him because of Brela. Elsewhere, Gael's father offers him a grant to study in London.

Matilda and Rodrigo avoid seeing one another, but feel devastated for the deep love they both feel. Elsewhere, Romulo visits the garden in order to recover the marriage ring he threw at Aide.

Rodrigo is furious with Matilda because he thinks she cheated on him with Armando. Elsewhere, Beatriz and Romulo decide to tell Juan Ramon and Mateo about their wedding.

Brela and Gabito make it out but then she tells him that they can't be together because she doesn't want to suffer. Elsewhere, Pilar tells Juan Ramon that she wants to have cosmetic surgery, but he doesn't agree.

Rodrigo goes to the building company with his mother to talk to Marco Aurelio about some projects. Matilda hides in the restroom so that Rodrigo doesn't see her.

After their break-up, Matilda and Rodrigo can't stop thinking about each other. Elsewhere, Pilar gets angry with Juan Ramon because he has to work on Saturdays.

Santiago confesses his feelings to Aide, but tells him that he is too young for her as he is the same age of her son. Meanwhile, Pilar has an allergic reaction to her cosmetic injections.

Rodrigo passes the building where Matilda told him she lived, but he doesn't find the guard that's always there and the new one tells him he doesn't know María.

Pilar doesn't tell Juan Ramón what she really saw before fainting and she says she was overreacting. Later, Arantza finds out Maria del Carmen moved into Rodrigo's house and tells Felicia.

Rodrigo and Matilda confront each other about their lies but he doesn't want anything to do with her anymore. Elsewhere, Pilar tells Livi what happened with her husband and promises not to lose Juan Ramón.

Armando tries to get close to Matilda but he can't do it. Elsewhere, Doroteo is frustrated by the fact that he won't be able to become Rómulo's manager and do better in life.

Michelle and Juan Ramón confess their feelings although they know that what they've done is wrong. Elsewhere, Estefania tells her mother that she is worried about her father marrying again.

Rodrigo goes after Matilda in order to ask her to tell him the truth. Meanwhile, Aide learns that Romulo and Beatriz's wedding is planned, and questions Beatriz to see if she is pregnant.

Rodrigo doesn't allow the girls to tell him what they know about María, thinking that he already knows everything. Later, Rómulo's wedding makes Aidé feel upset and Santiago's confession confuses her.

Juan Ramón talks with Michelle, but suddenly Pilar appears and invites Michelle for coffee at her house. Elsewhere, Alejandro sends his driver to pick up Georgina and take her to the hotel where he lives.

Georgina learns that Alejandro is the richest man in the country but she is still angry because he lied to her. Meanwhile, Rodrigo is astonished by Felicia's beauty.

It's Rómulo and Beatriz's wedding and Rómulo's friends surprise him by playing the song Rómulo wrote for Aidé. Later, Armando tries to flirt with Matilda, but she can't forget about Rodrigo.

Rodrigo is really hurt by Matilda's lies and goes to the coffee shop to talk to her, but they end up fighting. Elsewhere, Georgina spends the night with Doroteo at her house but doesn't want Arantza to find out.

Rodrigo and Stefi are talking about how awful they think their father looks with Beatriz because of the age difference. They don't know their mother is starting a relationship with somebody younger than her.

Aidé confesses to Elena about her relationship with Santiago. Meanwhile, Marco Aurelio invites Brela to a restaurant and she accepts. When they finish dinner he kisses her.

Rodrigo and Matilda suspect somebody lied to them so they would hate each other. Meanwhile, Rómulo goes back to Beatriz but she's packing her bags to leave.