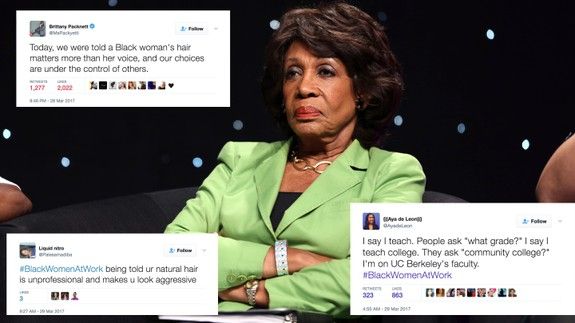 The disrespectful and condescending treatment of two prominent black Women in the U.S. has sparked a global hashtag campaign about everyday racism.

On Tuesday, Fox News commentator Bill O'Reilly said he couldn't listen to Congresswoman Maxine Waters' latest speech about Trump because of her hair, which he called "a wig." Later that day, U.S. Press Secretary Sean Spicer told veteran journalist April Ryan to "stop shaking her head" in response to an answer he gave.

Women around the world have since been sharing their "Maxine and April moments," using the hashtag #BlackWomenAtWork to highlight the everyday reality faced by black women.

Activist Brittany Packnett kicked off the hashtag #BlackWomenAtWork "so people don't think this is rare."

"It isn’t new. It is the daily experience of black women in the work place — at all levels — laid bare for the public to finally see with naked eyes," Packnett told Mashable. "These women at least deserve respect as humans, let alone as professionals. They received neither. It is absolutely unacceptable. They deserve the respect that their humanity, their accomplishments, and their work demands."

Today, we were told a Black woman's hair matters more than her voice, and our choices are under the control of others.

Sex on Your Period – Reasons to Do It
Branding 101: From Bingo to Bedroom D…
With GiftstoIndia24x7.com, this Raksh…
— Brittany Packnett (@MsPackyetti) March 28, 2017

This happens to black women everyday at work.
Share your Maxine and April moments, so people don't think this is rare. Use #BlackWomenAtWork
— Brittany Packnett (@MsPackyetti) March 28, 2017

"Every day we are told that our body language is wrong, that both our silence and our speaking are 'combative,' that our mere presence is intimidating, that our looks matter more than our work, that our natural hair is 'unprofessional,' that we couldn’t possibly have attained our station by our merits, are looked over and ignored, or endure a worse pay gap than our white women counterparts," said Packnett.

"It happens to black women of every station, whether we’re wage earners or pull in high salaries, whether we are domestic workers or in the C-suite. Black women have been at work since the dawn of this nation and have worked ourselves to the bone. We deserve dignity and respect. We have earned no less. No matter what, we will show it to ourselves and each other," Packnett said.

Hundreds of women took to Twitter sharing their experiences. For example, women working in academia talked about prejudice in the workplace.

Me: I'd like to check on the status of the books for this class.
Staff: The faculty member does that.
Me: I am faculty.#BlackWomenAtWork
— Nyasha Junior (@NyashaJunior) March 28, 2017

Some women talked about their coworkers underestimating their qualifications.

Surprised from white folks when you tell them you have a graduate degree as well, like they didn't expect it. #BlackWomenAtWork
— Mina the Autodidact (@BEAUTYBRAINS25) March 29, 2017

Once, I asked for a raise after 2 yrs. I discovered my manager lied saying I didn't have a degree.I had 2 college degrees. #BlackWomenAtWork
— Lisa Barber (@PhysicalCanvas) March 29, 2017

True Blood actor Jurnee Smollett talked about her experience of discrimination in Hollywood.

Me: hey I really loved this script..is that role open?

Them: Oh, we aren't will to "go ethnic" on that role #BlackWomenAtWork in Hollywood
— jurnee smollett (@jurneesmollett) March 29, 2017

Some of the tweets revealed the assumptions made about black women's level of seniority in their roles.

#BlackWomenAtWork a guy from another office told my mom to make him coffee. He didn't know she was the regional buyer aka HIS BOSS'S BOSS 😂
— Synthra (@ZhiteraWiggins) March 28, 2017

#BlackWomenAtWork Constantly getting mistaken for his personal assistant/ secretary when we are both QUALIFIED Quantity Surveyors.
— Abigail T. Letsholo (@abbz_lets) March 29, 2017

@NyashaJunior me:can I get the key from no.19? Staff: Can only give it to teacher. Me: I am teacher. #BlackWomenAtWork or #YoungPeopleAtWork
— Jaromir Mazak (@JaromirMazak) March 29, 2017

One woman tweeted that a white colleague used the N-word in her presence, claiming that it was fine because rappers use the word.

#BlackWomenAtWork a yt colleague used the N word & said "I don't get the big deal all your people use it", when I probed she said rappers
— Hayley Mills (@LenahLang) March 29, 2017

A lot of women shared stories in which colleagues made inappropriate and racist remarks about their hair.

#BlackWomenAtWork my boss: your hair is making too much statment
Me: Susan's has 4 different colors
My boss: yes but it's not an afro
— Lisa Craddock (@LisaCraddock1) March 29, 2017

Coworker: what are you doing with your hair ? Me: Going natural Him: Stop it, it looks bad you're ruining yourself #blackwomenatwork
— KAY RO$$♎️ (@Bluntlioness) March 29, 2017

This was my hair when told "I don't like your hair like that it's awful." #BlackWomenAtWork pic.twitter.com/74RVfNiVMj
— Freedom Nicole Moore (@freedommomusic) March 29, 2017

Maxine Waters responded to the incident with O'Reilly, tweeting a powerful statement alongside the hashtag, stating she's "not going anywhere."

I am a strong black woman. I cannot be intimidated, and I'm not going anywhere. #BlackWomenAtWork
— Maxine Waters (@MaxineWaters) March 29, 2017