Oh dear! What is it with Nigerian celebs o, HABA. Not too long ago Oge Okoye stole dog photos, now Kcee has gone ahead to steal a man’s Photo where he displayed some dollars on his legs in one of his instagram photos. The man found out and called him out lol. Kcee then went ahead to delete all comments on the post as soon as he was called out and the post now has ONLY the photos with no comments allowed.

CBD 2020: What to Expect + Our Top Pr…
Why Friday The 13th Will Be Your Luck…
The 10 Leading Blockchain Companies o…
Nusa Islands vs Gili Islands 2020 {Wh…
The Ultimate Winter Bucket List Accor…
The original photo was posted in February by vvs_uno.
The most heartbreaking part is that, Kcee called the name of GOD, Thanking God for what never existed. This is so so sad. Someone dragging God’s name into lies?  WEHDONE 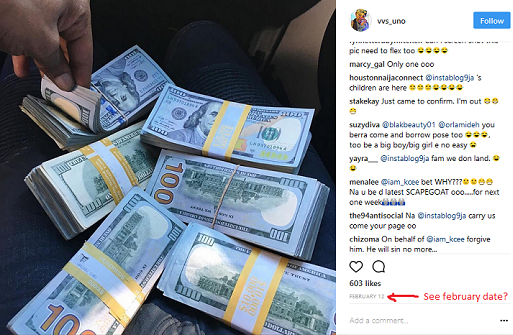