Visitors to my blog, old or new, will surely get the impression that I have an appreciation for the craftsmanship, ingenuity, expertise and creativity that goes into the costumes, props and sets featured here. I like to celebrate the Costume designers, seamstresses, tailors, artisans and production designers that help magic the magic come to life on the big and small screen. Another company that appreciates the artistry of the entertainment industry is Prop Store, and they are holding their seventh Entertainment Memorabilia Live Auction in London on December 1 and 2, 2020, with over 900 rare and iconic lots from cinema and television for you to bid on. I've perused the latest Prop Store auction catalogue and these are some of my top picks that you may like to add to your collection of screen-used treasures from sci-fi to romantic comedy, supernatural fantasy to fairytales. 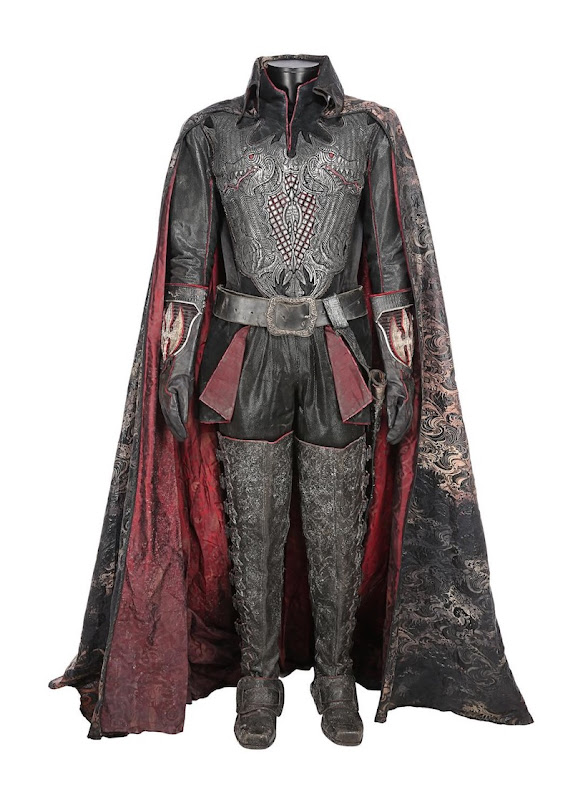 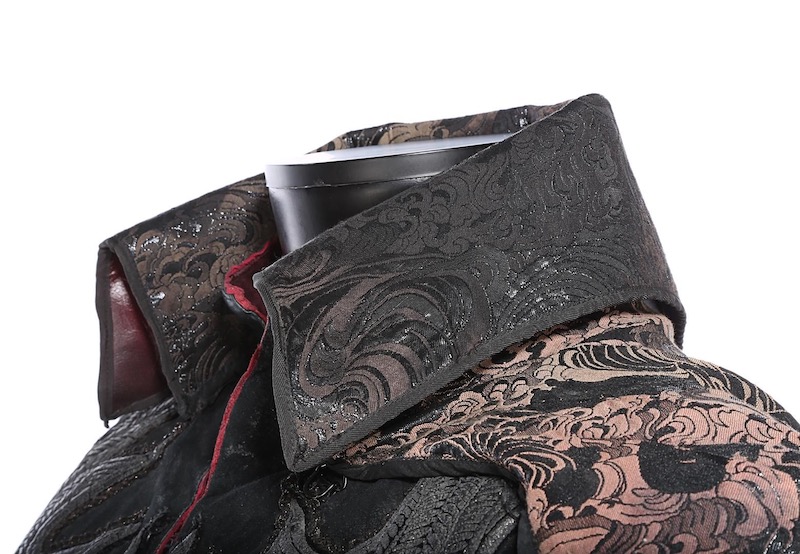 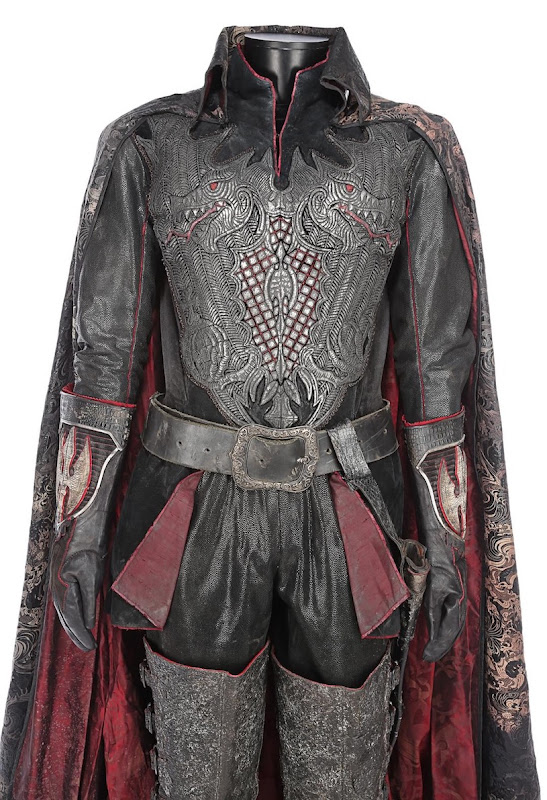 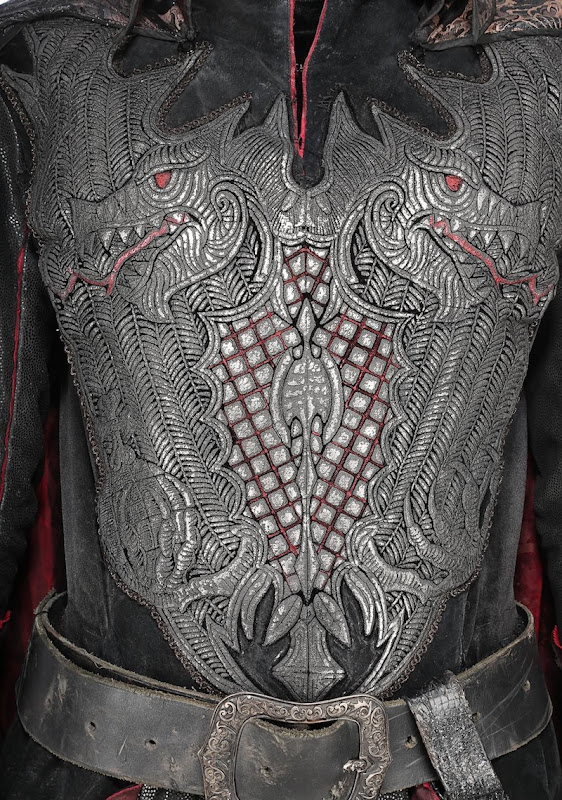 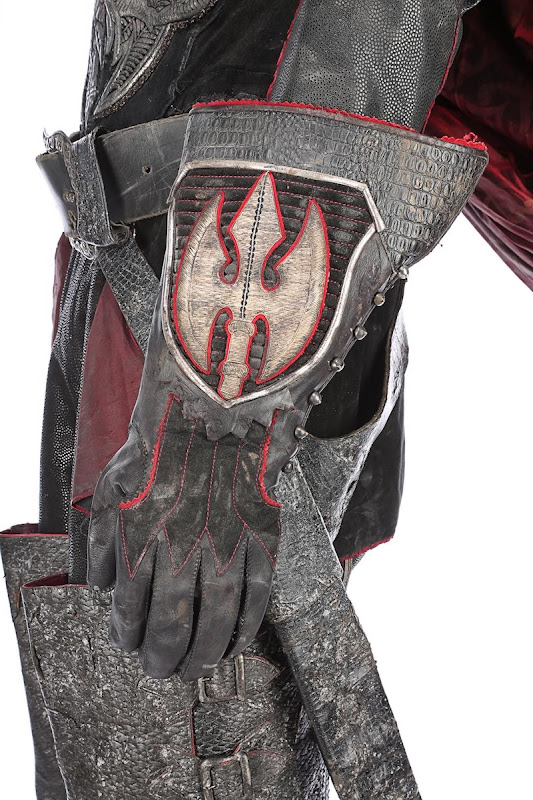 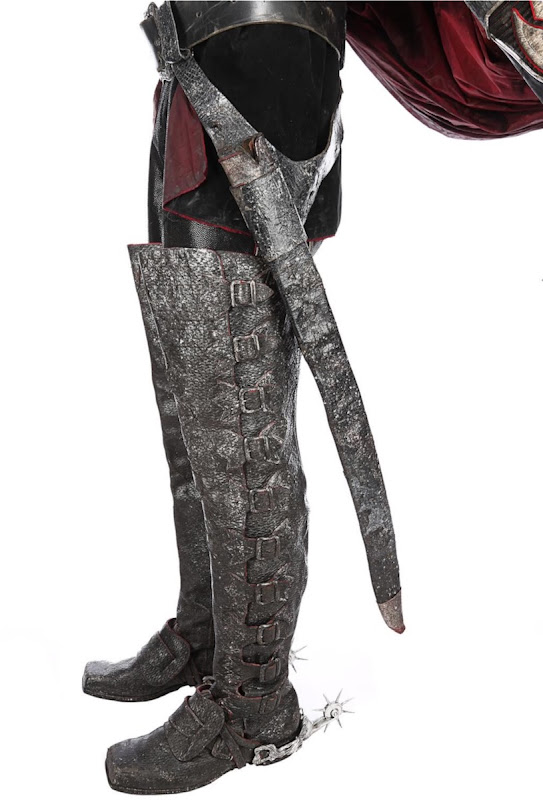 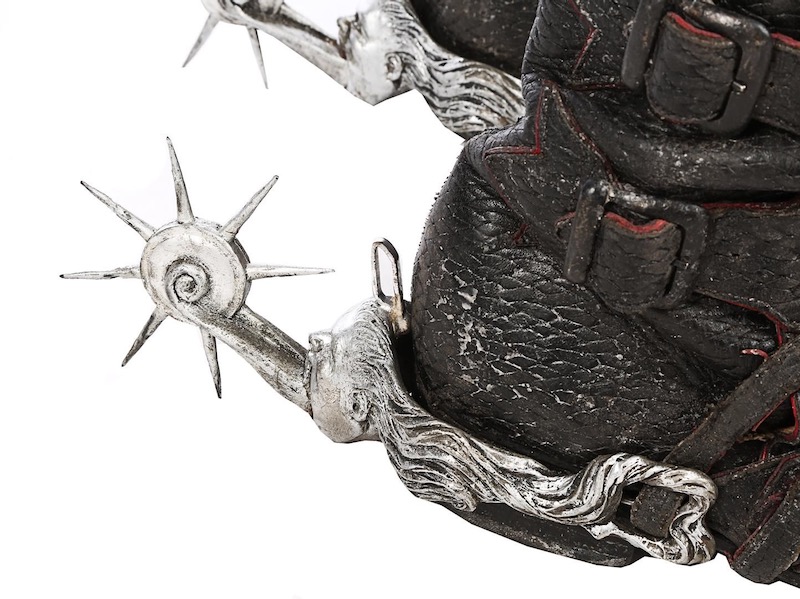 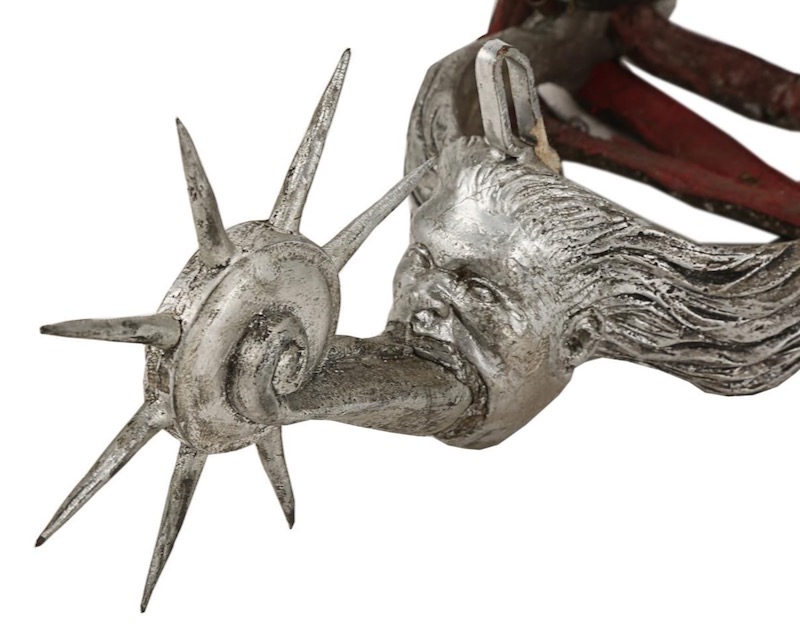 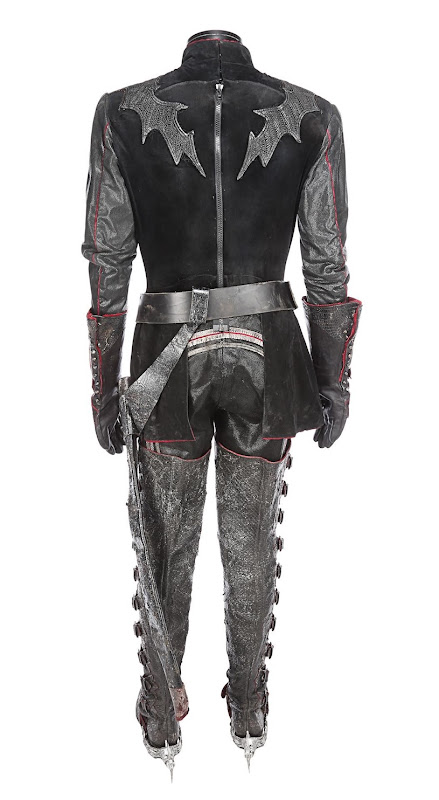 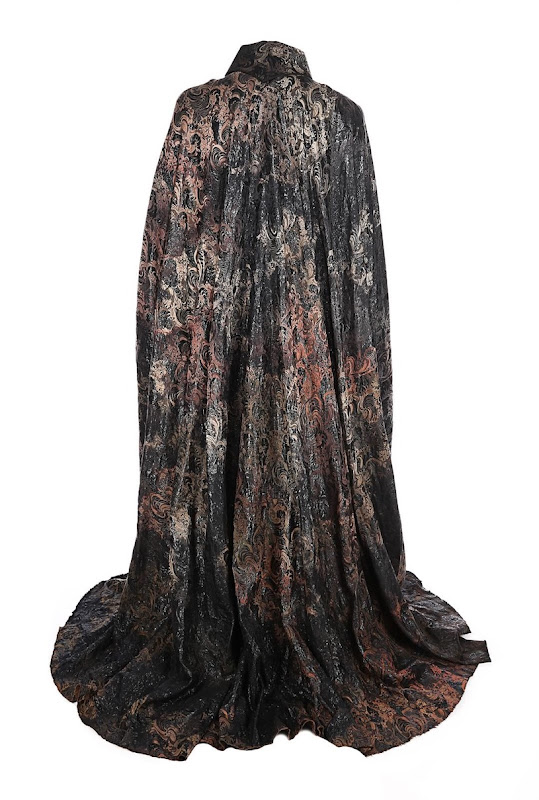 First up is this exquisite 'Headless Horseman' costume from 1999's Tim Burton fantasy horror, Sleepy Hollow film.
Colleen Atwood was Oscar nominated for her designs on this movie and you can really see why with this ornate outfit, from the floor-length cape, to the double-headed dragon motif on the chest to the thigh-high boots, large patterned belt buckle and demonic-looking boot spurs.
This costume is truly haunting and is estimated to sell for between £30,000 to £50,000 when auctioned.
Book of the Dead prop from The Mummy 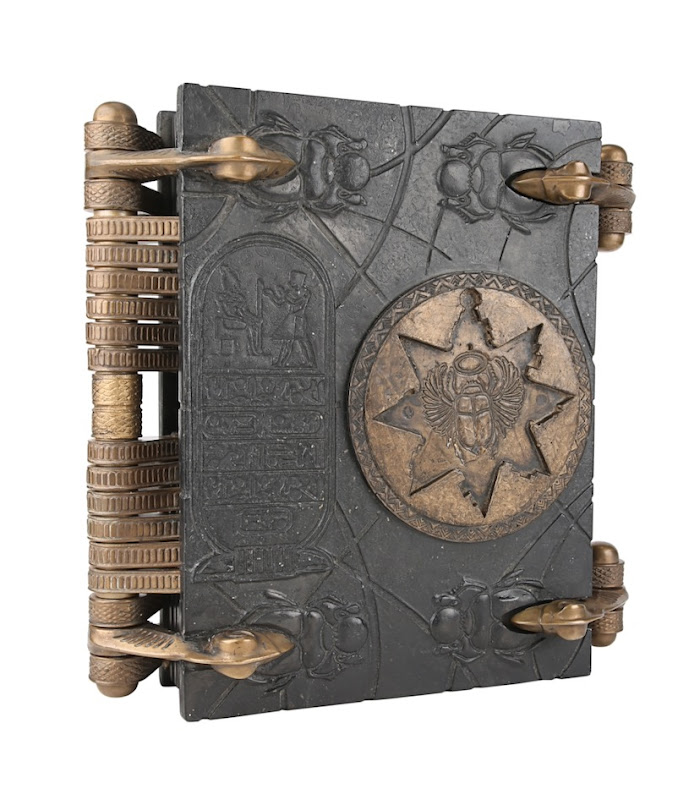 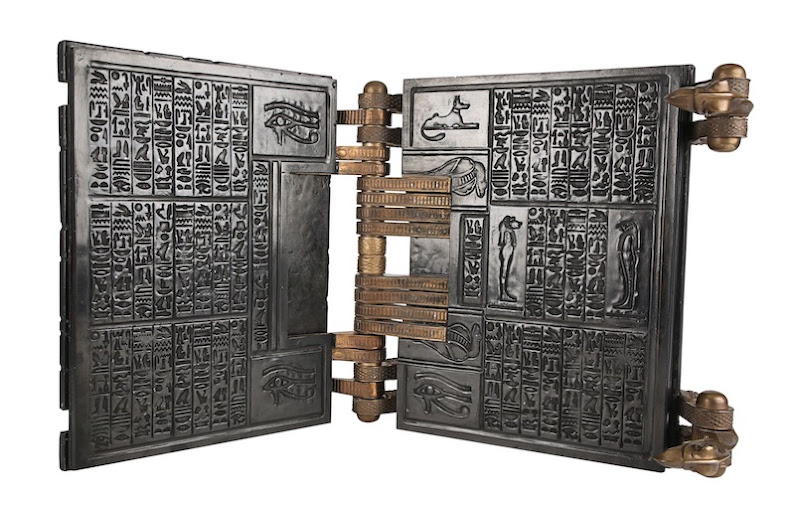 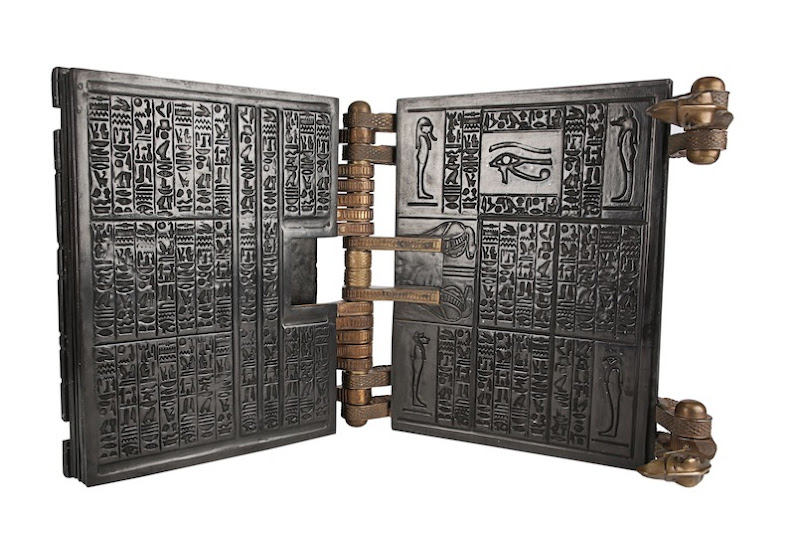 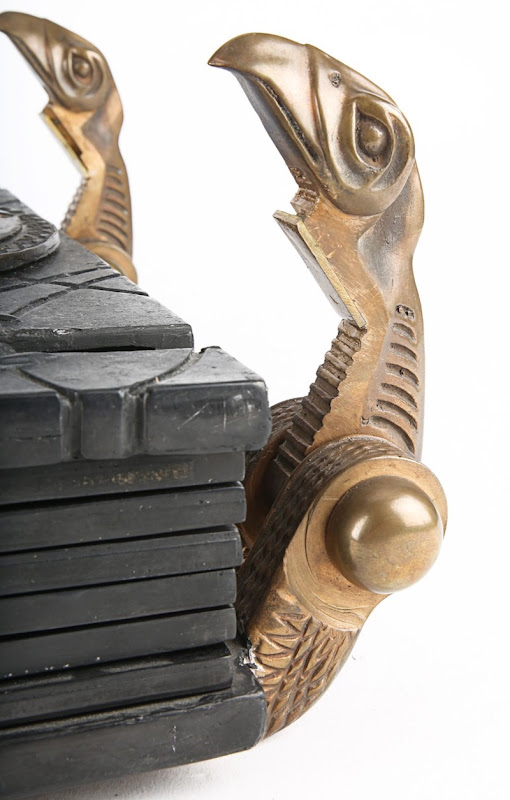 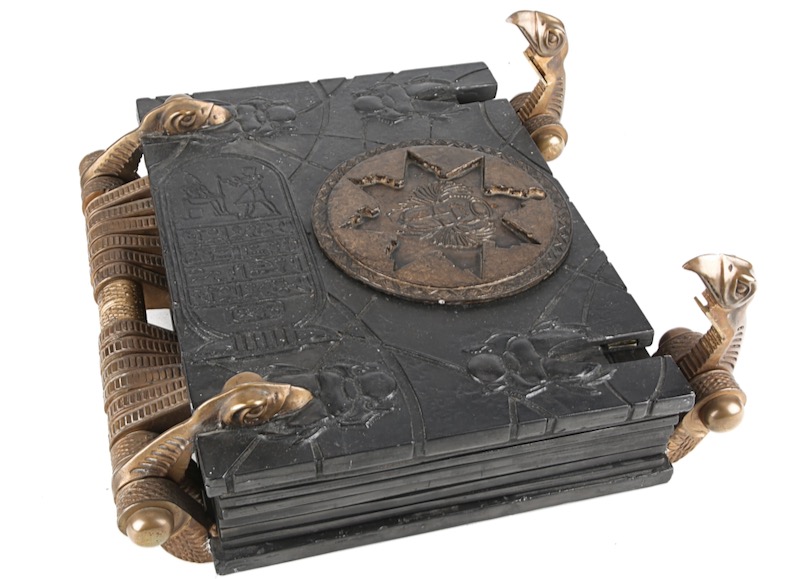 Keeping to the supernatural theme and another movie from 1999, this Book of the Dead hero prop was used in Stephen Sommers' action-adventure, The Mummy. This Egyptian artifact was accidentally used to raise the ancient priest 'Imhotep' from the grave.
I've actually seen this Book of the Dead prop from the treasure hunting movie on display at Universal Studios Hollywood back in 2009, alongside other costumes and props from the film.
This impressive book prop features ornate vulture-like clasps, twelve tablet pages covered in hieroglyphics and scarab beetle key lock design is expected to reach an estimated £20,000 to £30,000.
Peter Banning's Pan costume worn by Robin Williams
in Hook 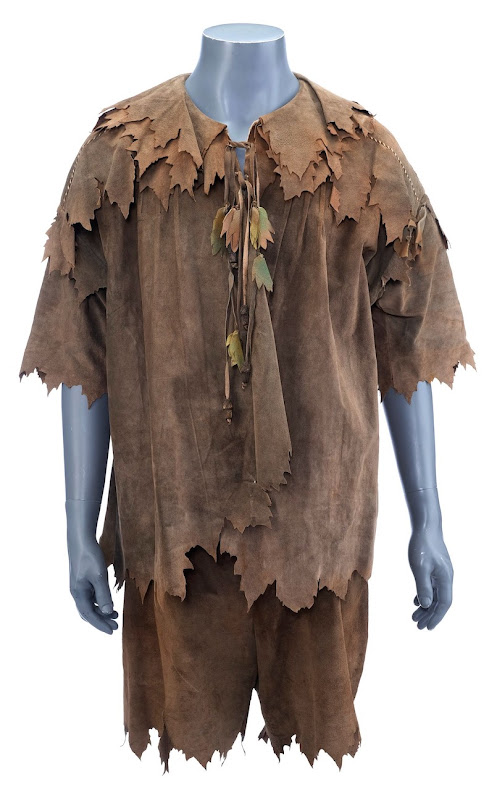 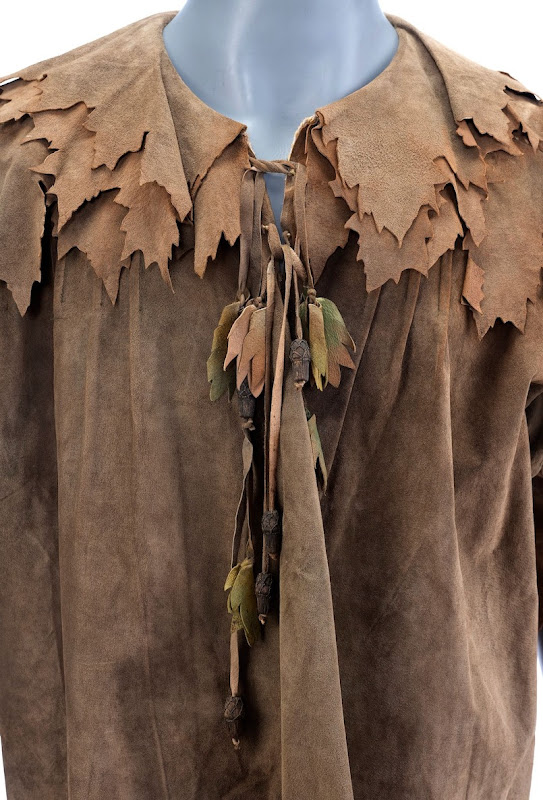 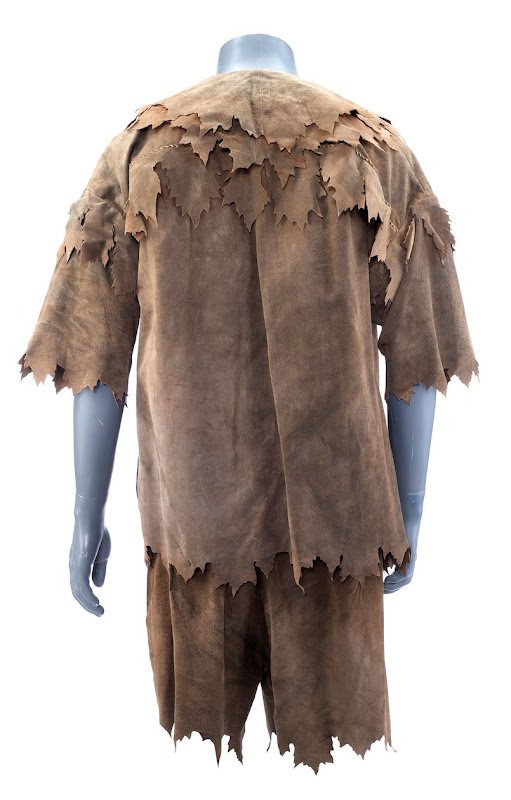 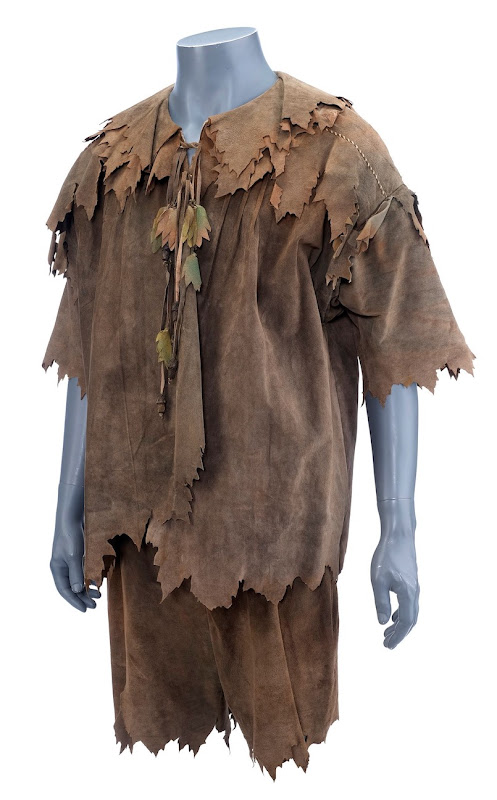 The next costume comes from Steven Spielberg's 1991 fantasy adventure Hook, in which Robin Williams played a grown up 'Peter Pan' named 'Peter Banning' who had forgotten his magical youthful spirit.
There's something nostalgic and simple about this leafy costume design by Anthony Powell, who was nominated for an Academy Award for his work on this fairytale movie.
This suede costume is a must-have for fans of the beloved comic actor and is expected to sell for £10,000 to £15,000.
Fans of the movie can also check out this cool Bowling Ball Kid prop from Hook that I once saw on display at the Planet Hollywood Cafe in Las Vegas.
R5 Droid from Star Wars: The Rise of Skywalker 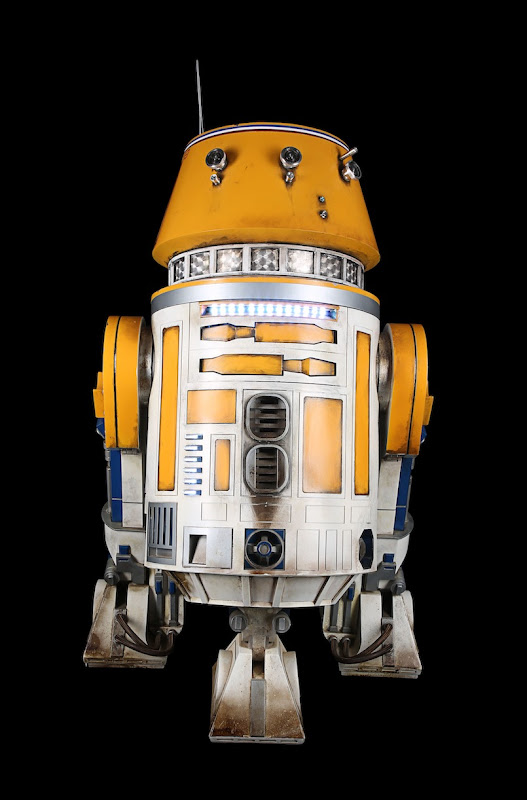 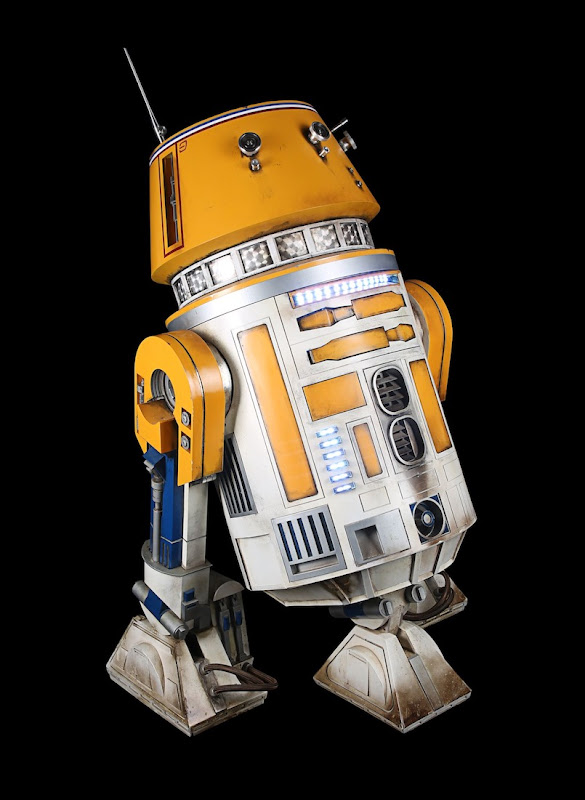 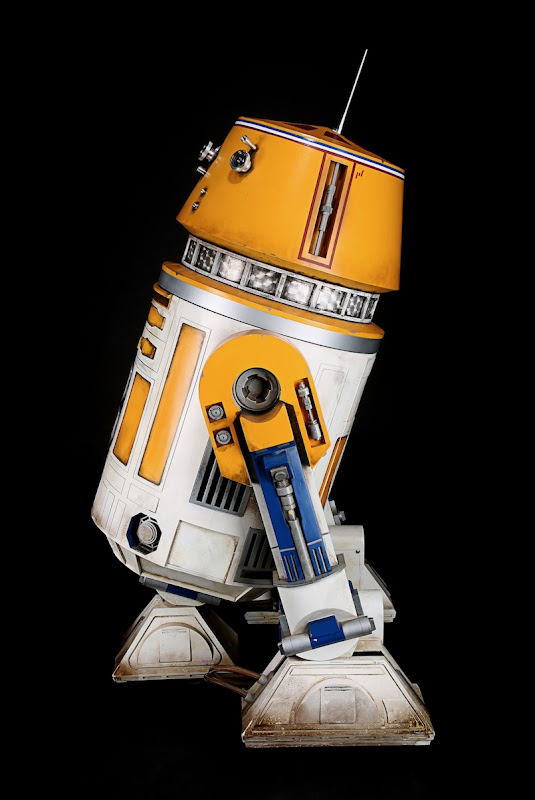 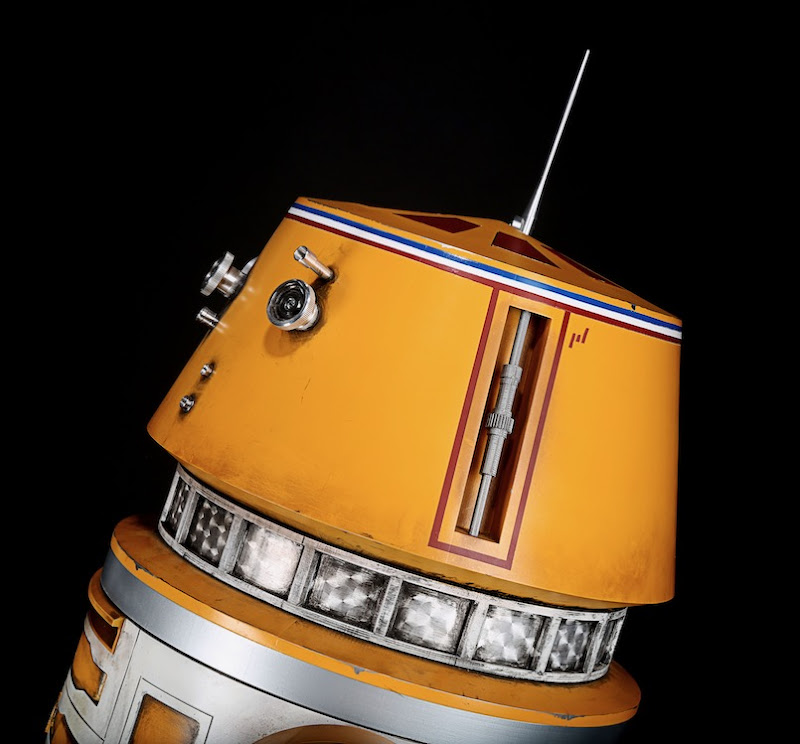 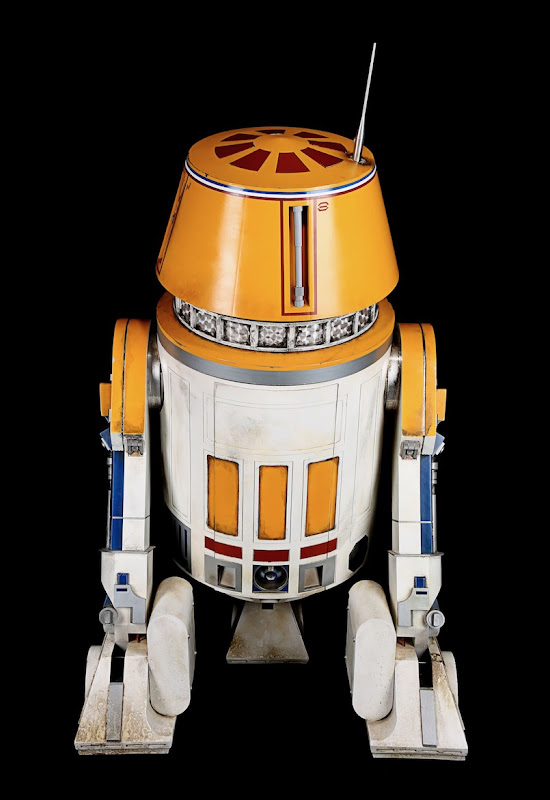 The next amazing prop comes from a galaxy far, far away from the recent Star Wars: The Rise of Skywalker installment, and it's a remote-controlled, light-up R5 Droid.
Alongside a working Dalek from Doctor Who, this would be a wish list Christmas present considering I was huge Star Wars fan growing up in the 1970s and 80s and I always loved all the other background Driods featured in the cinematic universe.
This working orange, white and blue R5 astromech Droid from the 2019 movie could be yours for £20,000 to £30,000.
Juliet's wedding dress worn by Keira Knightley
in Love Actually 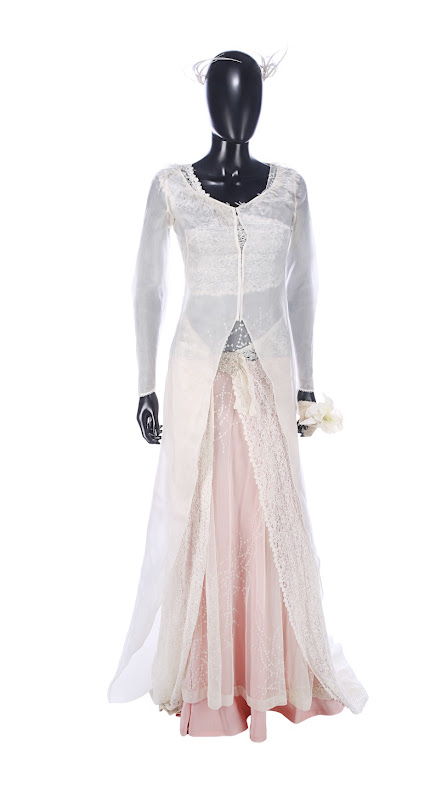 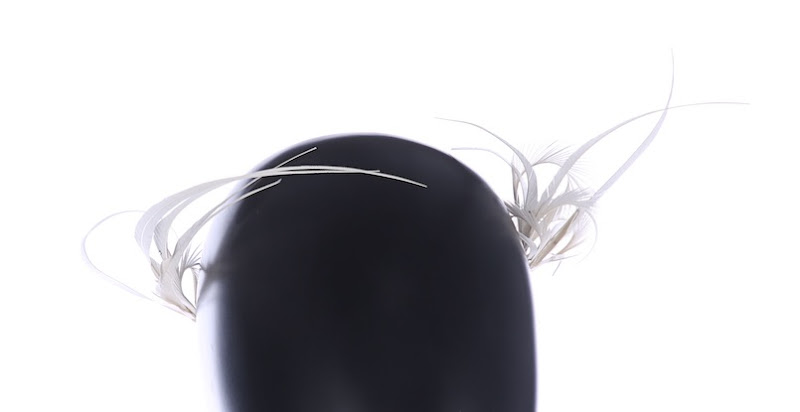 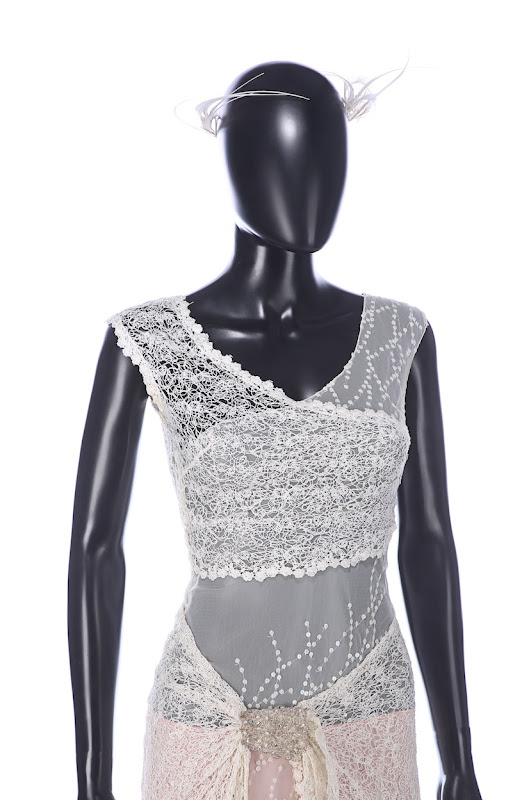 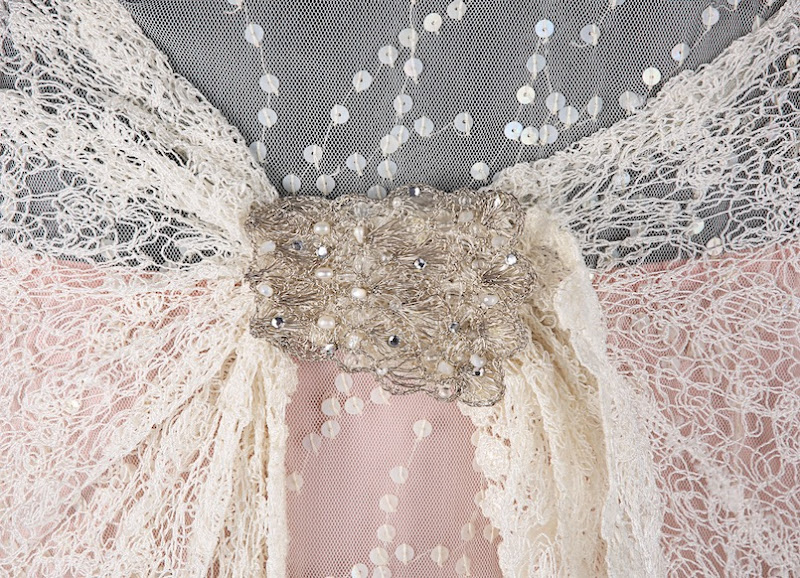 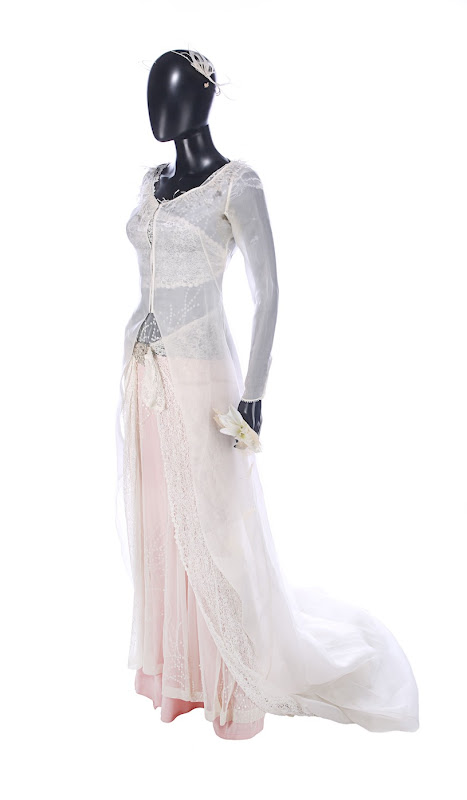 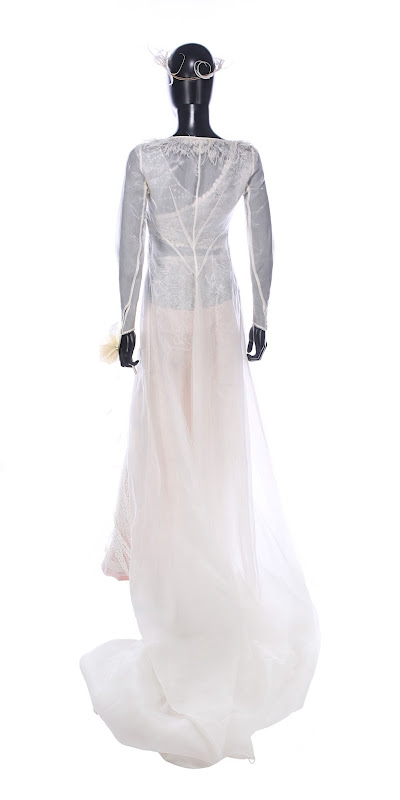 At this time of year my mind always turns to the films I'll rewatch over the holiday season, and Richard Curtis' 2003 romantic comedy, feel-good festive movie, Love Actually, is always top of that must-see list. That's why this wedding dress outfit worn by Keira Knightley as 'Juliet' stood out in the auction catalogue.
Joanna Johnston was Costume Designer on this film and this organza and lace outfit was custom-made for the production, including a feather headdress.
This piece of cinema history could be yours for £3,000 to £5,000, and you can see more Love Actually movie costumes when they were on display at Universal Studios Hollywood.
Times are tough for many at the moment, but these items are one-of-a-kind treasures and I know how passionate collectors can be about their favourite movies and TV shows.
2020 has been a miserable year, so if you wanted to splurge on something fun that has special meaning to you and would make you happy, why not.