Its official as America tech giant Apple has scheduled September 12 as the unveiling date for the much awaited Apple iPhone 8. The event will be holding at the Steve Jobs Theater located at the company’s new Apple Park campus. will also Other device expected to be announce, include the iPhone 7s and iPhone 7s Plus. The device will feature an edge-to-edge OLED display as well as a  wireless charging feature. 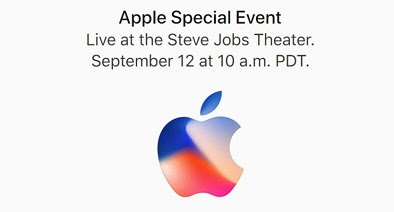 It is expected that the Touch ID fingerprint authentication feature in iPhone 8 Apple will be replace by a new 3D facial recognition technology and also the home button for a gesture control. Apple Iphone 8 has been on the news for along time and the unveiling will put to rest the various specs hitting the internet daily.
The event is set to kick off at 10:00 am PT (10:30 PM IST) in Cupertino, California and will be offer live to users of iPhone, iPad, as well as iPod touch users. Start turned to this blog as we will update you about the launch.

How to fix issues like iPhone stuck on Apple logo