Navy veteran John Garofalo appeared on a Fox News segment this month, showing off a massive presidential seal he carved for President Trump while receiving praise for his service in Vietnam as a SEAL.

What to wear: outfit ideas for Christ…
The Jon Gruden Case and Why the NFL S…
Review: Chris BadNews Barnes ‘BadNews…
Are there Differences between Real an…
5-Minute Non-Toxic Easy Homemade Play…

The piece was broadcast nationally and featured cascading shots of all Garofalo’s medals. Online, it went viral, racking up 1.5 million Facebook views on Fox’s Facebook page.

“He was listed twice during his service in Vietnam as missing in action,” Llenas noted at the segment’s close.

But when Navy Times contacted Garofalo Thursday, Garofalo admitted he had lied and never served in Vietnam, never received a Purple Heart and was never a SEAL.

Sign up for the Army Times Daily News Roundup
Don't miss the top Army stories, delivered each afternoon Subscribe Thanks for signing up! For more newsletters click here

Garofalo said he had falsely portrayed himself as a Vietnam vet and a SEAL for years.

“It got bigger and bigger,” Garofalo told Navy Times in a telephone interview. “What I did I‘m ashamed of, and I didn’t mean to cause so much disgrace to the SEALs.”

Records show Garofalo did serve in the Navy from Sept. 6, 1963, to Sept. 6, 1967, as an aviation boatswain’s mate ― aircraft handling, or ABH, a job that involves overseeing various ground-based functions involving aircraft.

The closest he ever got to Vietnam was a tour in Rota, Spain.

Former SEALs who first confirmed Garofalo’s lie, and family members of the man, both said they have contacted Fox about retracting the segment.

The Fox segment was still up on its Facebook page as of Thursday afternoon. A Fox representative said in an email that it would run an on-air correction Sunday and corrections would be made on its website and Facebook page.

“Fox News not withdrawing that story has drove me nutty,” said Don Shipley, a retired SEAL who outs bogus military service claims and was the first to obtain official records disputing Garofalo’s story. 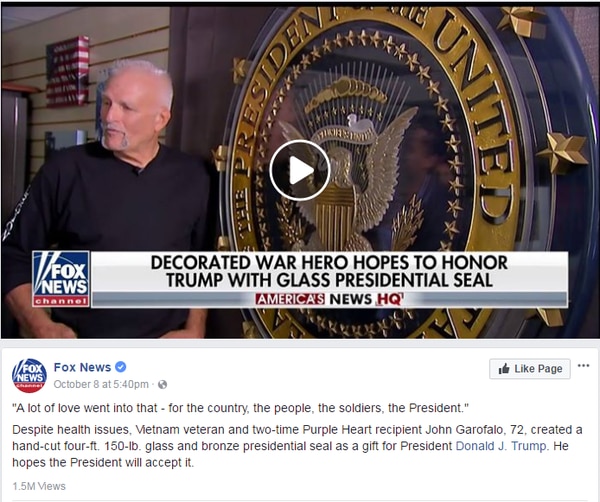 A Fox News segment earlier this month featured a man claiming to be a Vietnam War-era SEAL. He admitted to lying about his service this week.

Shipley said he approached Fox about retracting the story the day after it ran.

Facebook correspondence provided by Shipley shows he messaged Llenas about inconsistencies in Garofalo’s military history and asked Fox to retract the story.

“I don’t know who has the balls in this day and age to do something like that,” he said of Garofalo’s lies in an interview.

According to Shipley’s correspondence with Fox’s Llenas, the reporter told Shipley he had a request out for Garofalo’s records.

“You can turn this story around,” Shipley wrote to Llenas, according to a screenshot of his Facebook correspondence with the Fox reporter that Shipley provided to Navy Times. “I‘ll help you but avoiding it won’t help.”

One Twitter user tweeted at the Fox News account on Oct. 10, asking them to retract Garofalo’s segment as well.

Service records not only show that Garofalo did not serve as a SEAL, but that he did not receive a Purple Heart and did not deploy to Vietnam.

A Freedom of Information response shows Naval Special Warfare Command having no records of Garofalo in the history of the elite units’ ranks.

“Despite this diligent search, which included variations in spelling and order of name,” no records could be found that Garofalo ever qualified or participated in the SEAL, UDT or SWCC communities, the command’s FOIA response states.

After that he reported to Naval Air Station Oceana, Virginia, in December 1963, according to personnel records.

He headed overseas and reported to Fleet Air Reconnaissance Squadron (VQ) 2 in Rota, Spain, in January 1966, according to records, and separated from the Navy in September 1967.

A form dated 1993 entitled “transmittal of and/or entitlement to awards” only lists Garofalo as authorized for a National Defense Service Medal.

“Did not served (sic) with a unit/vessel awarded the Vietnam Service Medal, or any unit citations,” a staff comment reads.

The form lists Garofalo as the requester of the 1993 review.

In the Fox News segment, Garofalo was reluctant to be referred to as a “hero.”

“You are a hero,” Llenas told Garofalo in the segment. “But like most heroes—“

“I don’t like to hear that,” Garofalo said, cutting him off.

“Why don’t you like to hear it?” Llenas asked.

Garofalo appeared to choke up.

This post first appeared on Shareabler, please read the originial post: here
People also like
What to wear: outfit ideas for Christmas & summer
The Jon Gruden Case and Why the NFL Still Isn’t Serious About Social Justice
Review: Chris BadNews Barnes ‘BadNews Rising’
Are there Differences between Real and Online Blackjack?
5-Minute Non-Toxic Easy Homemade Playdough Recipe
The 9 Don’ts of Interviewing
Day 4 – How to Rehab a Painful Shoulder
iPhone 12 Line-Up Tops Charts in Q1 2021
Why I Chose to Be Vaccinated Against COVID-19
Coyote Half Guard BJJ Explained Step By Step