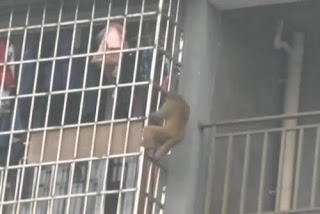 This is just so hilarious, so police in China said they failed to apprehend a thieving monkey caught on camera going into apartments to steal food.


a video filmed on Jan. 4  2017 in Chongqing's Qijiang district shows the monkey climbing on the exterior of an apartment building and entering residences through the balconies.

The monkey was also filmed climbing its way through the building's inside hallways.

Police said they were unable to catch the monkey, which took food and left messes in some apartments.


Officers said the monkey may have previously been fed by someone in the neighborhood, leading it to return for more food.