The State Of The Electric Motorcycle Industry 2015

On the negative side, names like Mission Motorcycles have disappeared from the playing field. Mission are blaming Apple for poaching their engineers, but I guess when you fail, you need to blame someone. But despite having a good looking and high performing sports motorcycle, it could not bring it to the market and they went bankrupt.

Another manufacturer that no longer exists as such, is Brammo. Long heralded for its innovative designs and performance, Brammo has been taken over by Polaris. Although they are still supporting the dealers and the purchased motorcycles, the Brammo engineers will be working more on the other Polaris products, like maybe electric snowmobiles?

Long standing Vectrix has been in and out of bankruptcy and finally closed last year. Despite a promising start, they slowly wilted way.

All these upstarts failing will put a dent in the confidence of potential buyers. Why spend a small fortune to buy a high-tech electric motorcycle to see the company bite the dust and lose all spare parts and support? Is it worth it to be the first?

But one company that is a start-up has managed to weather all the storms, and they are not only doing very well, they recently released new motorcycles. And that company is California based Zero Motorcycles.

Zero released at the AIMExpo in Florida last week new motorcycles and updated ones. Faster (98 to 102 mph, depending on the model), longer (192 miles) and blistering fast accelerations (0 to 60 mph in 3.3 seconds for the SR model). 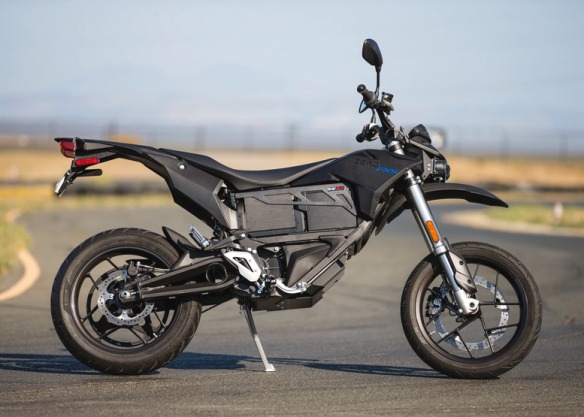 Their latest model, the FXS is a city hooligan bike with its 44 hp, 70 ft-lbs torque and a top speed of 82 mph. But the most important detail for this motorcycle is that the battery packs are swappable and removable. This means that for bikers living in the city and parking their motorcycles in the street or in areas where there is no electricity, they can now purchase a great city bike and charge their batteries at home.

Zero can be considered the Tesla of motorcycles. Alone against the industrial giants of the traditional industry, they are carving their own niche and they are doing it successfully.

So far there is one mainstream motorcycle manufacturer that is doing very well in the electric motorcycle department; and that is the German BMW with its electric C-Evolution scooter. Their manufacturing stock got sold out in Europe within the year, and even municipal police forces in Europe are using the scooter for their city cops. Stuffed with technology, the scooter is a real city and commuting scooter.

And the reason it’s so popular despite a stiff price? Because of the name BMW! You know the company is not going to fold, so when you buy their bike, it will be maintained for as long as you ride.

KTM also released electric motorcycles last years, but so far no sales reports have been released, but we’d expect they are selling fine. Again, KTM is a name that inspires confidence in their future.

Over the next few years, the battery technology is going to drop in price and increase in range. Performance is already on-par with other vehicles, even exceeding them.

The State Of The Electric Motorcycle Industry 2015