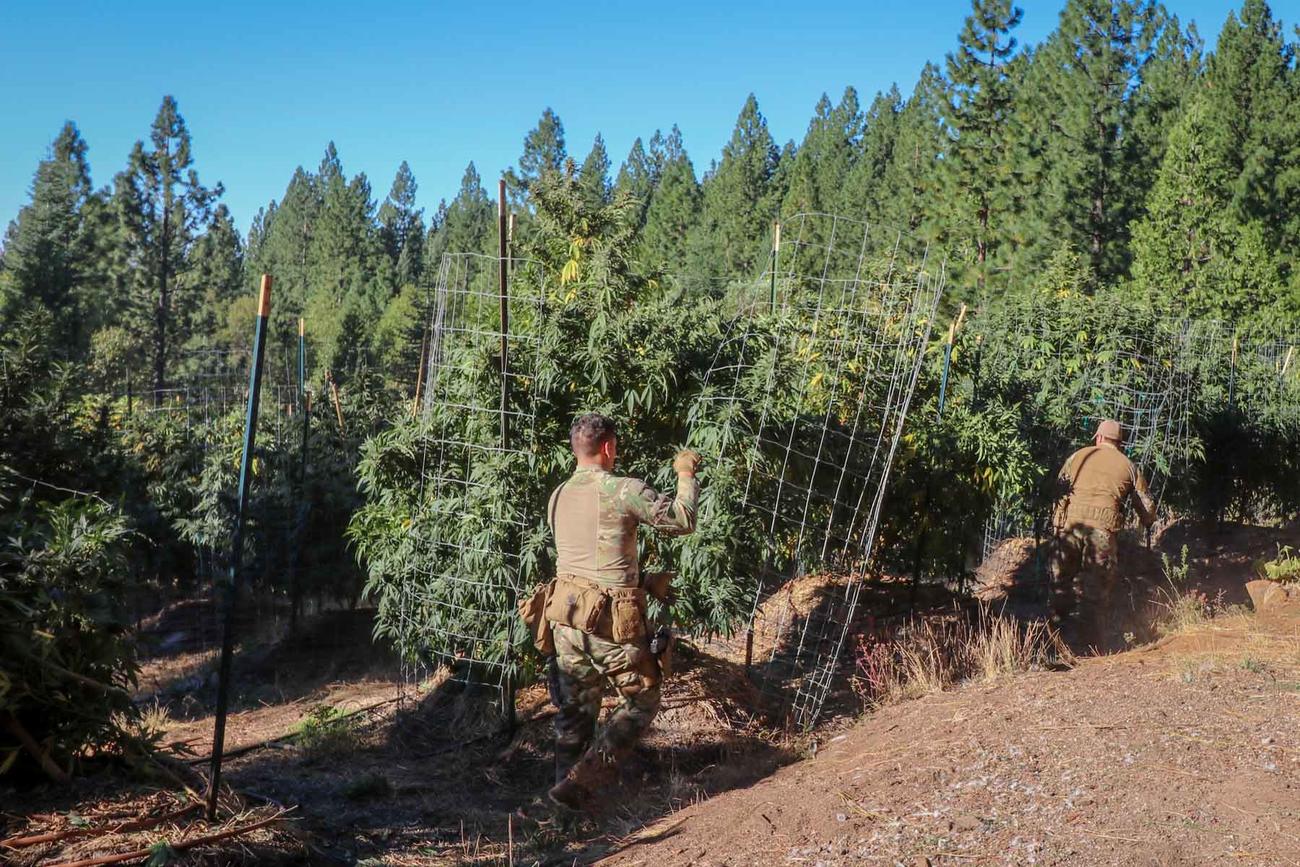 President Joe Biden’s proclamation pardoning thousands of Americans who had been federally charged with simple possession of Marijuana does not apply to members of the U.S. military, according to the White House.

A White House official told Military.com that Biden’s pardon “does not extend to UCMJ offenses,” referencing the Uniform Code of Military Justice — the federal body of laws enacted by Congress that applies to active-duty military service members and some retirees accepting a pension.

The pardons, which the White House announced Thursday and are solely for simple possession of marijuana, cover roughly 6,500 Americans, none of whom are currently in federal prison. Any Americans with other charges would not be covered by the Biden order. However, the vast majority of marijuana convictions, and punishments, happen at the state level.

Read Next: Even More Young Americans Are Unfit to Serve, a New Study Finds. Here’s Why.

While the president does have the unilateral right to alter certain punishments under the Manual for Courts-Martial, a major change to the Uniform Code of Military Justice would have to be made by Congress. A marijuana possession charge carries a potential penalty of dishonorable discharge, forfeiture of pay and a two-year maximum punishment, according to the Manual for Courts-Martial. The punishment is often far less in practice.

Pentagon spokesman Maj. Charlie Dietz, when asked how Biden’s proclamation could be applied to service members, told Military.com, “It looks like there are many steps that the lawmakers need to do before we can even begin to process whatever comes.”

Biden also called on the secretary of Health and Human Services and the U.S. attorney general to examine how marijuana is classified as a Schedule I drug, offering the same possible punishments as possessing drugs such as heroin or LSD. The president also encouraged state governors to reevaluate their marijuana laws.

While the president’s pardon may not help service members or retirees charged under the UCMJ, it could help broaden the pool of Americans who could now qualify for military service as many of the branches face the toughest recruiting environment in decades and start testing out their own policy changes that could offer leniency for prior drug users to join.

A study from the Pentagon recently revealed by Military.com shows that 77% of young Americans would not qualify for military service. Drug and alcohol abuse accounted for 8% of potential recruits between the ages of 17 -24 being dismissed from joining the ranks.

Eric Carpenter, an associate professor of law at Florida International University who specializes in military justice, said the UCMJ applies to service members first, before federal or state laws are applied.

While Biden’s pardon does nothing for troops, Carpenter said the move does signal to federal prosecutors across the country that those simple marijuana possession charges would not be worth pursuing, which could reduce the number of people barred from service by future convictions.

“This will open up a lot of people to come into the services,” Carpenter told Military.com. “But once they’re in, the UCMJ will apply to them.”

Marijuana use has gained popularity in America. According to an August poll from Gallup, 16% of Americans say they currently smoke marijuana, whereas a new low of 11% of American adults reported being tobacco smokers.

“Americans’ regular use of marijuana is modestly higher than cigarettes at this point, but the trend over recent decades in marijuana use is upward,” the Gallup findings showed.

The vast majority of states have legalized marijuana for medical use, recreational use or both. Only 11 states have not allowed marijuana in any form: Indiana, Wisconsin, Kentucky, Tennessee, North Carolina, South Carolina, Idaho, Wyoming, Nebraska, Kansas and Texas, according to MJBizDaily, a trade publication that follows the industry.

Notably, more than 50% of all new recruits come from states where marijuana is now legal, at least for medicinal use, according to a 2021 study by Rand Corp., a think tank that researches issues facing the military.

While marijuana and other THC-related products may be legal in many states, they are still illegal at the federal level and, therefore, outlawed for service members under the UCMJ.

But some military branches have been workshopping policies that would give drug users a second chance at joining the ranks.

Department of the Air Force spokeswoman Ann Stefanek said late last month that the Air Force and Space Force are starting a two-year pilot program that would allow certain applicants who test positive for THC — the main psychoactive component in marijuana — to retest at a later date.

“The pilot program offers some prospective applicants an opportunity to retest after 90 days if they are granted a waiver,” Stefanek said in an emailed statement. “If those who have been granted a waiver pass a second test, candidates will be allowed to enlist.”

Under previous Department of the Air Force policy, a positive THC screening at a Military Entrance Processing Station — or MEPS — would have excluded a candidate from joining.

If they test negative for THC 90 days later and enlist, “They must adhere to the Uniform Code of Military Justice and DAF policy, which prohibit drug use,” Stefanek added.

Related: Smoked Pot Recently? New Waiver Means You Might Still Be Able to Join the Air Force or Space Force