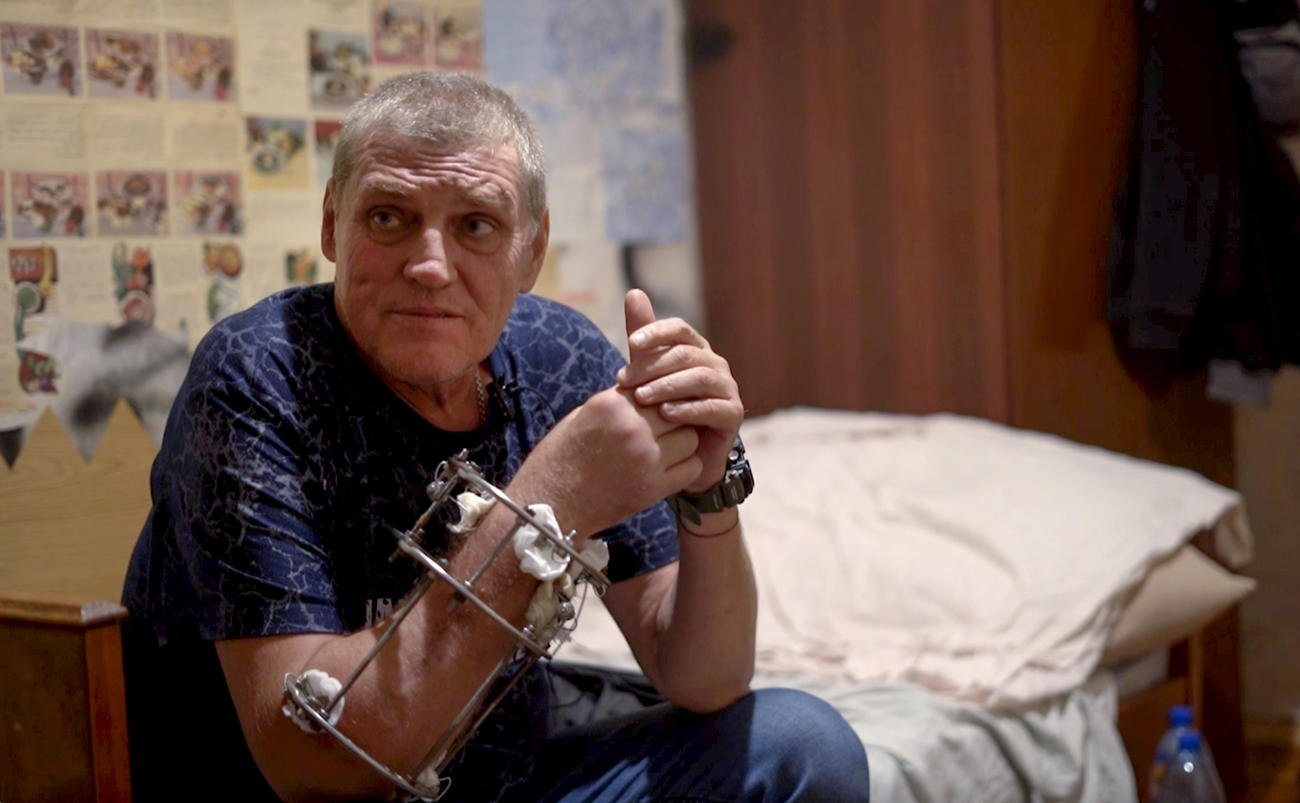 ZAPORIZHZHIA, Ukraine — Alone in his apartment in the Russian-occupied city of Enerhodar in southeastern Ukraine, nuclear Plant security guard Serhiy Shvets looked out his kitchen window in late May and saw gunmen approaching on the street below. When his buzzer rang, he was sure he was about to die.

Shvets, a former soldier in Ukraine’s military who was loyal to Kyiv, knew the gunmen would either kill or abduct and torture him. He thought briefly about recording a farewell to his family, who had fled to safety abroad, but instead lit a cigarette and grabbed his gun.

Six Russian soldiers broke down his door and opened fire, which he returned. Wounded in the hand, thigh, ear, and stomach, Shvets began to lose consciousness. Before he did, he heard the commander of the group tell his men to cease fire and call an ambulance.

Shvets, who survived the shooting, is among workers from the Zaporizhzhia Nuclear Power Plant recounting their fears of being abducted and tortured or killed by Russian forces occupying the facility and the city of Enerhodar. Ukrainian officials say the Russians have sought to intimidate the staff into keeping the plant running, through beatings and other abuse. but also to punish those who express support for Kyiv.

A good life before the war

Life was good for employees of the Zaporizhzhia Nuclear Power Plant before the Russian invasion of Feb. 24. They were guaranteed a financially secure and stable life for their families.

And even though Ukraine still bears the psychological scars of the world’s worst atomic accident at Chernobyl in 1986, the Zaporizhzhia plant — Europe’s largest nuclear facility with its six reactors — provided jobs for about 11,000 people, making Enerhodar and its prewar population of 53,000 one of the wealthiest cities in the region.

But after Russia occupied the city early in the war, that once-comfortable life turned into nightmare.

The invaders overran the ZNPP, about 6 kilometers (nearly 4 miles) from Enerhodar, but kept the Ukrainian staff in place to run it. Both sides accused the other of shelling the plant that damaged power lines connecting it to the grid, raising international alarm for its safety. Ukrainian officials say the Russians used the plant as a shield from which to fire shells on nearby towns.

Reports of intimidation of the staff and abductions began trickling out over the summer. Rafael Mariano Grossi, head of the International Atomic Energy Agency, the U.N.’s atomic watchdog, told The Associated Press about reports of violence between the Russians and the Ukrainian staff.

About 4,000 ZNPP workers fled. Those who stayed cited threats of kidnap and torture — underscored by the abduction Friday of plant director Ihor Murashov, who was seized and blindfolded by Russian forces on his way home from work.

He was freed Monday after being forced to make false statements on camera, according to Petro Kotin, head of Energoatom, Ukraine’s state nuclear company. Kotin told AP Murashov was released at the edge of Russian-controlled territory and walked about 15 kilometers (9 miles) to Ukrainian-held areas.

“I would say it was mental torture,” Kotin said of what Murashov suffered. “He had to say that all the shelling on the Zaporizhzhia Nuclear Power Plant was made by Ukrainian forces and that he is a Ukrainian spy … in contact with Ukrainian special forces.”

Enerhodar’s exiled Mayor Dmytro Orlov, who spoke to Murashov after his release, said the plant official told him he had spent two days “in solitary confinement in the basement, with handcuffs and a bag on his head. His condition can hardly be called normal.”

More than 1,000 people, including plant workers, were abducted from Enohodar, although some have been released, estimated Orlov, who fled to Zaporizhzhia, the nearest city under Ukrainian control, after refusing to cooperate with the Russians. Kotin estimated that 100-200 remain abducted.

Orlov said the first abduction was March 19, when Russians seized his deputy, Ivan Samoidiuk, whose whereabouts remains unknown. The abductions then accelerated, he said.

“Mostly, they took people with a pro-Ukrainian position, who were actively involved in the resistance movement,” he said.

Orlov alleged they were tortured at various locations in Enerhodar, including at the city’s police station, in basements elsewhere and even in the ZNPP itself.

“Terrible things happen there,” he said. “People who managed to come out say there was torture with electric currents, beatings, rape, shootings. … Some people didn’t survive.”

Similar sites were seen by AP journalists in parts of the Kharkiv region abandoned by Russian troops after a Ukrainian counteroffensive. In the city of Izium, an AP investigation uncovered 10 separate torture sites.

Plant worker Andriy Honcharuk died in a hospital July 3 shortly after the Russians released him, beaten and unconscious, for refusing to follow their orders at the facility, Orlov said.

Oleksii, a worker who said he was responsible for controlling the plant’s turbines and reactor compartment, fled Enerhodar in June when he learned Russian troops were looking for him. The 39-year-old asked not to be identified by his full name for fear of reprisal.

“It was psychologically difficult,” Oleksii told the AP in Kyiv. “You go to the station and see the occupiers there. You come to your workplace already depressed.”

Many plant employees “visited the basements” and were tortured there, he said.

“Graves appeared in the forest that surrounds the city. That is, everyone understands that something horrible is happening,” he said. “They abduct people for their pro-Ukrainian position, or if they find any Telegram groups on their phone. This is enough for them to take a person away.”

Another employee who spoke on condition of anonymity for fear of his safety said he was unafraid of working at the plant amid shelling but decided to flee in September after colleagues were seized. He said Russians visited his home twice while he was away, and the possibility of torture was too much for him.

The plant’s last reactor was shut down in September to guard against a disaster from constant shelling that cut reliable external power supplies needed for cooling and other safety systems. Kotin said the company could restart two of the reactors in a matter of days to protect safety installations as winter approaches and temperatures drop.

But the power plant sits in one of four regions that Russia has moved to annex, making its future uncertain.

Kotin on Tuesday renewed his call for a “demilitarized zone” around the plant, where two IAEA experts are based.

For Serhiy Shvets, whose apartment was raided May 23, it was only a matter of time before the Russians came for him during the occupation of Enerhodar, he said. He had signed up to serve in Ukraine’s territorial defense forces shortly after the invasion and had sent his wife and other relatives abroad for safety.

He said the Russian forces who shot him called the ambulance “so I could die in the hospital.”

Doctors initially gave him a 5% chance of survival after he lost nearly two-thirds of his blood. But following several operations, he was well enough to leave Enerhodar in July and is living in Zaporizhzhia.

Shvets, whose right hand is in a metal brace, quietly exhaled from pain as he moved it and said the only thing he regrets now is that he is too disabled to fight.

“I’m a descendant from Zaporozhian Cossacks,” he said, referring to his ancestors who lived on the territory of Ukraine from the 15th to 18th centuries and defended it from invaders. “There was no such thing as surrender for them — just freedom or death.”

He added: “Why would I want such a life if I don’t have my freedom?”