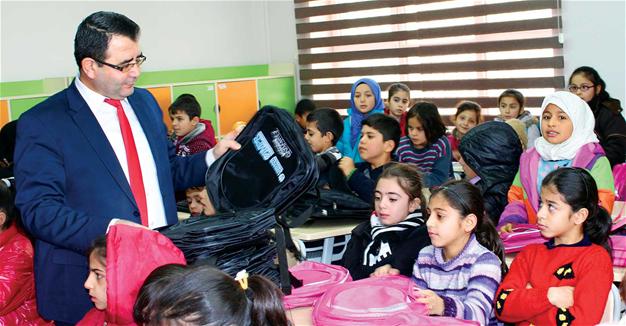 The European Union on Jan. 12 unlocked another 200 million Euros ($213 million) as part of the multi-billion aid package to meet the needs of Syrian Refugees being sheltered in Turkey.

The European Commission said in a statement that the money will be spent on the construction and equipping of school buildings for refugee children and their host communities, as well as on the boosting humanitarian support to refugees through the Emergency Social Safety Net.

“Most recently, contracts worth over 200 euros million were signed to boost education infrastructure, build and equip schools, and facilitate access to schooling for tens of thousands of refugee children,” said Johannes Hahn, commissioner for European neighborhood policy and enlargement negotiations.

“The European Union thus provides the most vulnerable refugees with the chance for a better life in Turkey,” Hahn added.

“I am both happy and proud to have been able to witness tangible results of the Facility [for Refugees in Turkey], providing much-needed life-saving assistance to those that need it the most,” Christos Stylianides, commissioner for humanitarian aid and crisis management, said in a statement.

“So far, 37 projects have been contracted worth 1.45 billion euros, out of which 748 million euros has been disbursed. The total allocated for implementation under the Facility for Refugees in Turkey on humanitarian and non-humanitarian actions now stands at 2.2 billion euros,” the statement said.

The multi-billion euro facility is part of a joint EU-Turkey refugee action plan, under which the bloc has pledged aid to meet the needs of refugees in Turkey, as well as visa liberalization and speeding up the candidate country’s accession talks, in exchange for Turkey stemming the flow of refugees seeking to enter Europe.

Under the agreement, the EU is supposed to provide 6 billion euros ($6.8 billion) in aid to help Turkey care for millions of refugees. The EU will disburse the initially allocated 3 billion euros ($3.4 billion) under the Facility for Refugees in Turkey and ensure funding of further projects for persons under temporary protection identified with input from Turkey.

Turkey hosts around 3 million Syrian refugees, more than any other country in the world. The country has spent around $25 billion on helping and sheltering refugees since the beginning of Syrian civil war.

Syria has been locked in a devastating civil war since early 2011, when the Syrian President Bashar al-Assad regime cracked down on pro-democracy protests – which erupted as part of the Arab Spring uprisings – with unexpected ferocity.

Since then, hundreds of thousands of people are believed to have been killed and millions more displaced by the conflict.