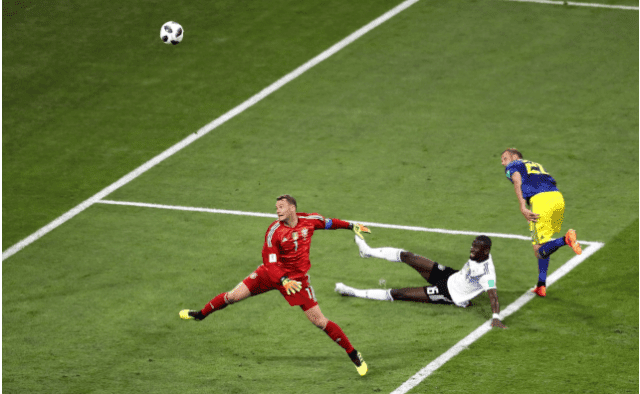 HALF-TIME Germany 0 Sweden 1 Magnificent from Sweden. They've shielded profound, remained restrained and held up to take their risk to counter-attack. When they've possessed the capacity to, they've looked extremely risky, and Germany is wavering on the edge of an unfathomably early World Cup exit.

Joachim Low needs to change things and get his group revved up. What an occupation he has staring him in the face now.
That is shrewd from Boateng. He's in the privilege halfspace close to the crate, cuts onto his left and attempts an early shot to the near post. The goalkeeper frenzies and races over to stop it, however, the shot merely is wide.

Toivonen puts Sweden ahead. Kroos gives the ball away in midfield with a thoughtless pass and the Swedes jump on the opportunity. Claesson crosses the ball towards the striker who chests the ball while wrestling Boateng and dinks it over Neuer. Awesome wrap-up.
Olsen pulls off a Double spare! Gundogan discharge a shot from a remove that is diverted the guardian, however, does well to stop it and gets going down rapidly to deny Muller on the bounce back.

The half finishes with a once in a lifetime opportunity for Sweden to twofold their lead. Larsson swings a set piece in from the privilege, and Neuer very much spares Berg's looking header. Germany appears to have hit a new Low under Joachim. He needs to start up his troops or else they are going home. Like France in 2002, Italy in 2010 and Spain in 2014.