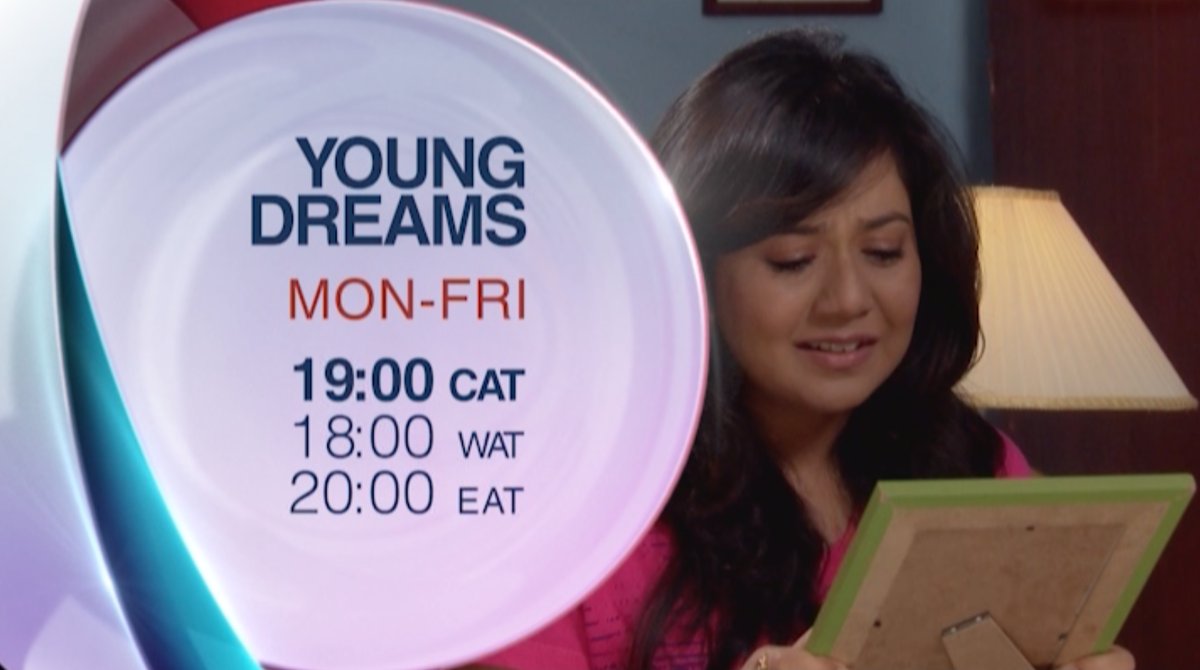 Coming up on Young Dreams this December 2016:

The unknown people who put up the notices about girls wearing jeans finally reveal themselves - unfortunately Chhaya encounters them first. The hockey coach finally acknowledges Rachna.

Charu tells Sangeeta that the food they all ate was ordered from Mayank's favourite restaurant. Mayank stands up for Gunjan in the cinema when the same men who insulted Chhaya target her.

Rachna is in a possible life threatening situation as she gets locked outside the college gates. Mayank tries his best to expose Charu for who she really is. Dayal finds out that Rachna has been playing hockey all along.

Dayal tells Rachna that she can go to college but only if she gives up hockey and he also tells Gunjan to start watching what she wears. Gunjan starts a protest against the activists. Mayank saves Gunjan from being bumped.

Thanks to Rachna and Gunjan's brilliant plan, the men who terrorised the women's lives are finally stopped. Gunjan tells Mayank that it's time to forget about her now.

Shail sees an article in the newspaper about Gunjan who put a stop to the activists. Shail overhears how Rachna's teammates insult her and it motivates her to go against Dayal's decision.

Just as Rachna gets ready to join her teammates on the field, an unexpected face appears. Gunjan convinces Rajeev to try to build Rachna's self confidence.

Rajeev convinces Rachna to get her head in the game and they win the match. Shail tells Seema and Sangeeta that she is aware of what they have done, but now Dayal has no objection to Rachna playing hockey.

Dayal and Shail finally sort out their differences and make peace with one another. Shail plans a secret birthday party for Gunjan, but the real surprise is yet to come. Rachna begins to fall for Rajeev.

Rachna goes looking for Rajeev and just then, she discovers he has a very high fever. Akash tells everyone that Gunjan is going back with him. Shail, Rachna, Dolu and even Dayal try to convince Gunjan to stay.

Savitri makes a unexpected visit to Rachna's college and it is revealed to us that Rajeev is her son. Gunjan confesses her love for Mayank not knowing that Shail heard every word.

Gunjan and Mayank try very hard to explain to Shail about how they feel about one another, but Shail keeps avoiding the subject. Gunjan and Akash prepare to leave and as she says her goodbyes,she realises Mayank is nowhere to be found.

After the arrival of Shail at the train station, Gunjan is left with a very tough decision. Mayank vows to tell everyone in the family about his love for Gunjan. Rajeev finds out that it was Rachna who took care of him.

Seema convinces Dayal to start with the wedding preperations. Gunjan and Rachna try hard to get Dayal's permission to go on the trip. Mayank tries his utmost best to tell his mother and father about his feelings for Gunjan.

Mayank goes missing and it leaves everyone worried. At the camp Vihaan plays a prank on the girls, but unfortunately for him Gunjan finds out about it and they all give him a fitting reply.

Shail reads the letter Mayank wrote right before he ran away. Vihaan tries again to prank the girls, but his plans fail thanks to Gunjan. Rajeev asks Rachna lies to Rajeev in order for her to get close to him.

Its finally revealed who Rachna's potential future husband is. Mayank tells Gunjan that the only way out of this, is if they both run away together. Dayal finds the letter Mayank left behind and causes a lot of drama for Shail.

Rachna confesses to Rajeev about the feelings she has for him. Dayal tells Shail that when Gunjan and Mayank return, he is throwing Gunjan out the house. Rachna comes back home and tells everyone Gunjan ran away with Mayank.

Mayank and Gunjan reveal that they didn't do what everyone thought they would do. Seema makes an unexpected announces that catches everyone off guard.

Seema gives her consent for Gunjan and Mayank to get married. Thanks to little innocent Dolu, Charu finds out the truth about Gunjan and Mayank. Gunjan teaches Vihaan a lesson he will never forget.

Charu comes over and apologises to everyone present for her behaviour, question is…are these apologies really sincere?. Rachna is in a tough predicament as she has both the Agarwal brothers to deal with.

Gunjan discovers that Rachna's would be husband is none other than Vihaan. Rajeev tells Rachna that he does not love her and it leaves her devastated. Gunjan decides to observe the fast for Mayank.


Young Dreams is on Zee World from Mondays to Fridays at 19h00.

Zee World continues to bring you the very best in Indian entertainment with a new heart-warming series Young Dreams which follows the story of two cousins from opposite ends of the world.
Starting on Zee World on DStv Channel 166 on 19 October at 19:00, the light-hearted family drama revolving around the lives of two teenagers Gunjan, a smart 17-year-old who has always been free-spirited girl living in Mumbai and Rachna, her conservative cousin.
Tragedy strikes the family when Gunjan’s mother Sneha dies of cancer and Gunjan has to live with Rachna and her conservative family. Both Gunjan and Rachna will have to adapt to each other’s lifestyles and Gunjan, who has always enjoyed her freedom, finds it difficult to adjust to this new constrained environment.
It’s a story of love, everlasting friendship and new beginnings and what starts out as tragedy ends in strong bonds of friendship and family.
Young Dreams is about celebrating adolescence as the two girls navigate their teenage years together, helping each other face growing pains. And we soon discover that each of them has something great to teach the other.
Gunjan helps Rachna realise her worth and heighten her confidence. While she learns lessons about patience and solidarity from Rachna.
Rachna’s father, Dayal, is the strict head of the family who makes it difficult for these two young ladies to openly deal with the usual adolescent challenges. This makes it difficult when love comes knocking for these two young ladies. Shail, Rachna’s mother, helps to pacify Dayal and keep the family atmosphere peaceful

This post first appeared on The Edge Search, please read the originial post: here
People also like
Why I Chose to Be Vaccinated Against COVID-19
Mussaenda blooms year-round
“The Friend Who May Not Seem a Friend”: The Cat and the Fire, Part 1 of 3
Strange Groups
Goal 2020 review and 2021 Resolution