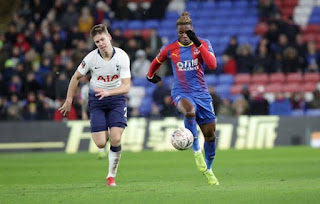 Tottenham went out of their second knockout competition in four days after defeat by Crystal Palace in the FA Cup fourth round at Selhurst Park. Having lost a Carabao Cup semi-final to Chelsea on penalties on Thursday, Spurs were 2-0 down inside 35 minutes.
Connor Wickham marked his first start since November 2016 with a goal before a penalty by ex-Spurs midfielder Andros Townsend doubled the lead. Spurs missed a penalty before half-time when Kieran Trippier blazed wide.
Connor Wickham had made six League and cup substitute appearances this season prior to this tieIt was their third miss from the spot in two games after Lucas Moura and Eric Dier failed in Thursday’s shootout at Stamford Bridge as Spurs went out of the EFL Cup. A much-changed Tottenham side were lacklustre against Palace.
On the few occasions they did create serious chances, they could not find a way past Julian Speroni, with the 39-year-old Argentine keeper making crucial saves to keep out Georges-Kevin N’Koudou and Fernando Llorente. Palace fans celebrated wildly at the final whistle after a first win over Tottenham since 2016 saw them advance to the fifth round for the first time since the 2015-16 season, when they went on to reach the final. The FA Cup was seen as Tottenham’s most realistic chance of winning a trophy, as they failed to reach the EFL Cup final, sit nine points behind leaders Liverpool in the Premier League and face an awkward last-16 Champions League tie with Bundesliga leaders Borussia Dortmund.
Yet with Harry Kane and Dele Alli injured and Son Heung-min absent after international duty with South Korea, Spurs failed to score for only the third time in 36 league and cup games this season. Mauricio Pochettino made seven changes, with French winger N’Koudou – making his first appearance for the club since December 2017 – among those given a chance to impress.
However, they failed to recover from a poor start in which Jeffrey Schlupp powered past Davinson Sanchez for Wickham’s goal and a blatant handball by Kyle Walker-Peters gifted Palace a penalty and a commanding lead. With his side trailing 2-0, N’Koudou was twice denied in quick succession by Speroni when Palace were down to 10 men after Joel Ward was off the pitch for treatment to a cut nose.
Speroni did not even have to make a save from Trippier’s penalty, awarded after Patrick van Aanholt kicked the back of Juan Foyth’s leg, with the England defender putting his attempt wide. Spurs improved after the interval but were frustrated by Speroni, who produced a fine diving stop to keep out a shot on the turn by Llorente. Tottenham are the 13th Premier League club to go out of the FA Cup before the fifth round, adding to the frustration for a club whose title chances have suffered following two home league defeats. As they wait for their new stadium to be completed, they cannot leave Wembley quickly enough, but cannot get there for a cup final.