He told LBC that Leave.EU did not get Russian money and such claims were “part of a fake news narrative”.

If there was any attempted Russian interference in the 2016 referendum, it was at an “amateur level”, he said.

Since Britain voted to leave the EU in June 2016, questions have been raised about the unofficial campaign of Leave.EU and its chief backer Mr Banks, as well as the possible influence of Russia on the referendum result.

On Sunday, it emerged that Mr Banks had had two more meetings with the Russian ambassador Alexander Yakovenko than he had previously disclosed in his book on the referendum battle, The Bad Boys of Brexit.

According to details of emails reported by the Sunday Times and the Observer, Mr Banks and Mr Wigmore also discussed potential business opportunities in Russia including a proposal involving six gold mines.

The two will appear before the Commons culture and media committee on Tuesday to answer questions about alleged Russian involvement in the EU referendum campaign, having initially pulled out of a hearing on Friday.

M Banks and Mr Wigmore spoke to Mr Farage on his weekly radio show on LBC, where they told him that the allegations against them were part of a political witch-hunt directed against prominent Brexit supporters.

“Where is the evidence we took Russian money. There is no evidence.”

Asked whether the campaign got Russian funding, Mr Wigmore replied “not one penny or rouble”. 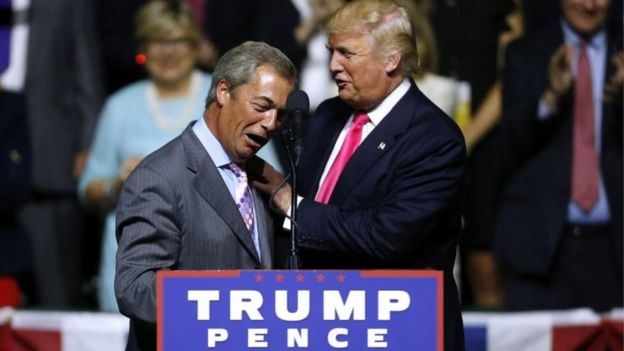 Mr Banks, whose wife is Russian, said opponents of Brexit and Mr Trump had seized on claims of Russian interference as an explanation for their defeats, suggesting several MPs had used the ancient right of parliamentary privilege to accuse Leave.EU in the House of Commons.

“This whole fake news narrative stated to roll from it. There hadn’t been a Russian witch-hunt (before). It had not been mentioned. It was when Trump won, there had to be reason he won and Brexit had happened.”

Mr Wigmore said it was Mr Yakovenko’s job to stay in touch with British politicians and claimed that only two days before their last meeting with him, the Russian ambassador had met Chancellor Philip Hammond.

As they were not MPs, he said he and Mr Banks were not required to officially record who they met but he said he would give MPs details of all their meetings, including with CIA officers in the US embassy in London.

Asked if he believed there was any attempt by Russia to influence the outcome of the 2016 vote, Mr Banks said it was “possible” but he believed it was confined to a few hackers and computer bots at a “low level”.

Leave.EU was fined £70,000 by the Electoral Commission earlier this year for breaches of election law in the Brexit referendum.

The watchdog said the group – which was separate from the official pro-Brexit group Vote Leave – failed to report “at least” £77,380 it spent. Mr Banks has said he will appeal against the ruling.