A few weeks back we talked about Vortex Comics' new Characters in a new Comic series titled Ekun - One of them being a rock spirit. What's he called? You can read all about it HERE

There's a new Comic series from the same company - Ojuju!

For those that don't know, Ojuju means Masquerade in most parts of Nigeria and its pretty scary when you hear it from a Nigerian Tongue. Relax! This isn't a horror comic. It's Action packed!

From the Ashes of the Unknown "Iheme Odiete" an ancient Masquerade leader of the Egungun and Ekpe masquerade tribe rose from a century of slumber and is on the run, leaving a trail of blood as he moves. No one knows his true origin , who he's after and why he runs .. except the one who knows all ... June XII ... and he is displeased with the mess Ojuju has been making. 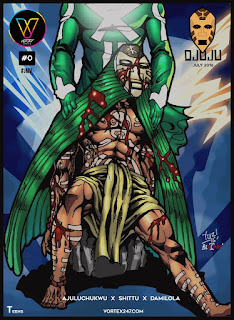 June XII is a Comicbook character who is not bound by geographical borders and does all it takes to ensure justice for those it’s due to. He is the voice of the people. Nobody knows who he is or what his true abilities are. But everyone knows what he stands for and what he stands against. He is dedicated to the entity called Nigeria and her people and he can fly!
What happens when Justice Meets Vengeance? Find out in Ojuju #0: Justice Meets Vengeance