On 2014, Aquaria KLCC was known as the 4th ranked Aquarium in the TripAdvisor Travelers' Choice Awards for aquariums to visit in Asia.
As great as it sounds, it was also my first time to visit an aquarium that houses a lot of animals not only seawater species, but also freshwater species, and even reptiles and some amphibians.
Visitors are allowed to touch some species right from the entrance.
First, we bought some tickets online which seems to be cheaper than buying it directly from there. Or basically because it is more convenient just in case the line gets really long. On the ticket, there are details on how to get to the location.

For us, since we were staying at Bangsar South, we had to take two (2) MRT Tickets. One from KL Gateway and getting off to KL Sentral, and another train from the same station to Imbi. There was a reason why we went to Imbi first.
From Imbi station, we walked towards Aquaria KLCC. 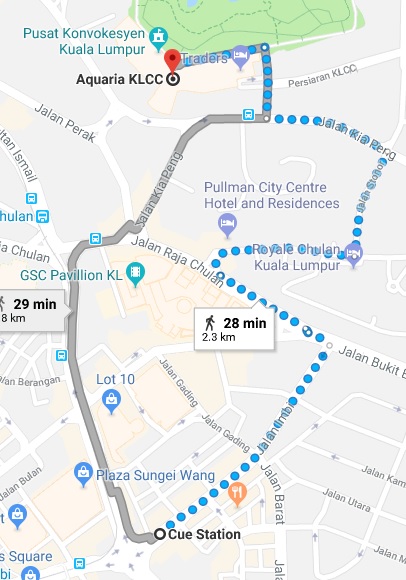 Yes, it was a really long walk. But the catch there was that, we were able to walk through a long air conditioned walkway which was less hassle and safer than walking in the street an crossing.﻿﻿
And where the walkway ends, is where Aquaria is located, and walking a bit farther is where the Petronas Towers are located.
When we arrived, we just followed a huge wallpaper with the aquaria pictures in it and at the entrance, some staffs were waiting. The entrance was dark and dim due to their lighting. Before going to the cashier, a photographer asked us to stay in a spot to be taken photos of.
Then, we handed our printed tickets to the cashier. They gave us a paper bracelet as proof of buying.
The first thing we saw were piranhas. 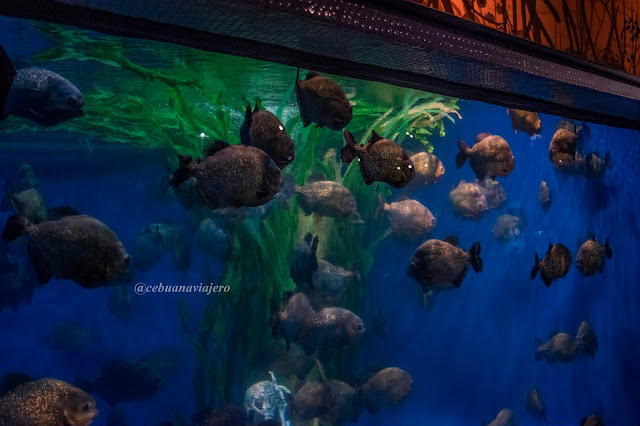 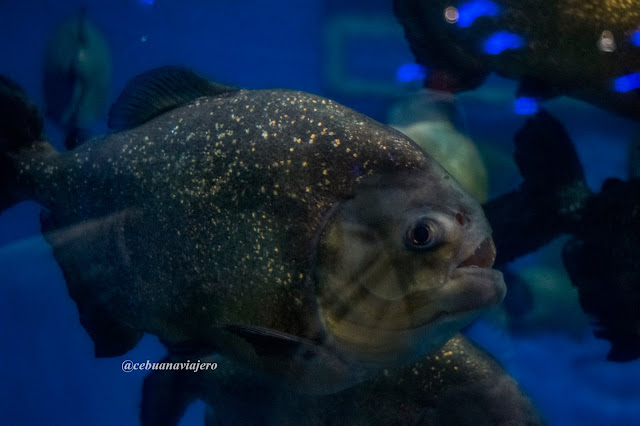 And following the route, was an open aquarium created like a part of the sea where you can touch the sea creatures and take note that we could only touch them with two fingers. 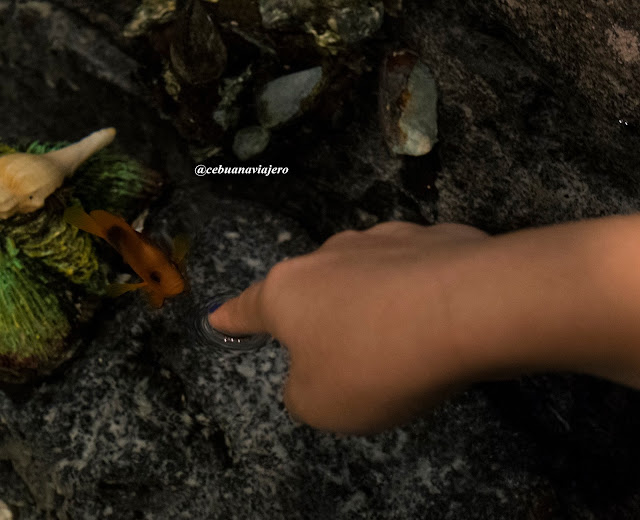 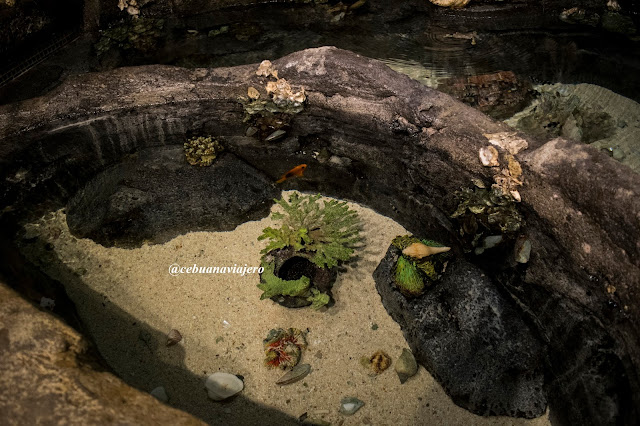 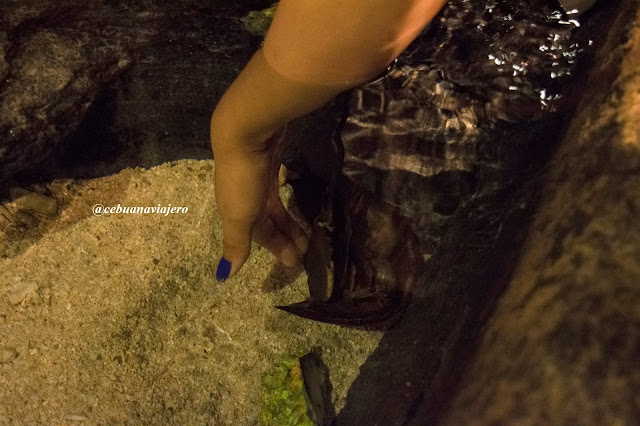 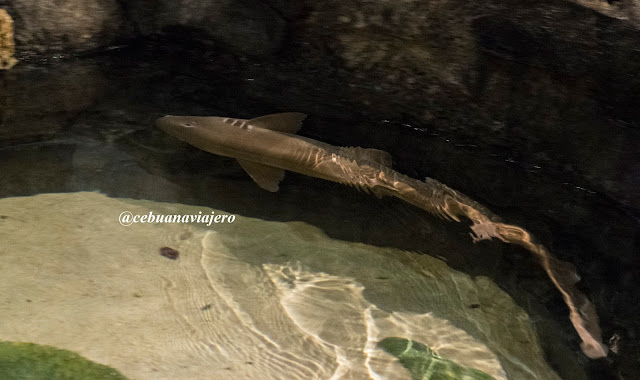 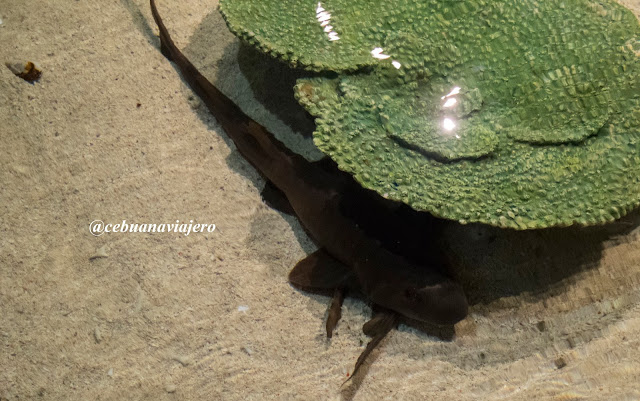 There is a tap where you can wash your fingers or hands and dry them up with a towel they provide.﻿﻿
As we followed the route, we get to see more species on separate aquariums mostly attached to a wall with their details beside them.

If you look closely, you can see the snake camouflaging on the leaves.

There are deep sea water creatures too and in their aquarium, the glass has some moist and is as cold as ice.

You can also see the otters, though they were sleeping when we were there.

Here comes freshwater fishes. The aquarium was so fun because there was a fake lightning with a thunder sound so it felt realistic as if it was raining and since we could only see the roots and the fishes, we felt like we were walking/swimming together with them.

Right after the freshwater fish and other fishes in an open aquarium, we went down and took another photo before going to the tunnel.
Lined up together with other people and enjoyed standing, watching, taking photos of the fishes, stingray, and the diver who seemed to be cleaning the aquarium.

Right outside the tunnel, we could also find and enjoy the sea turtle, eel, and other fishes in a wider and taller wall.

There are smaller aquariums where small fishes reside and some jellyfishes with beautiful lights to enhance their elegance.

It was feeding time so we enjoyed watching how small shrimps try to survive and camouflage on the pebbles so they don't get eaten.

There was also a huge fossilized teeth, not sure whether they were real or not because we didn't dare touch them. But I think they aren't real, maybe.

Once, we stepped on the escalator after taking photos with the fossilized teeth, we ended up in the souvenirs area and the exit. Where we could get the photos taken by them with the aquarium background and other effects.

We didn't have enough money to buy those, not even a memento, and just left. It was a lot of fun indeed. Just be sure to get used to standing a lot since there weren't enough seating space to relax, rather you wouldn't even want to relax just to enjoy each aquarium before other people crowds on it.

Thank you for reading and please do anticipate our next food or travel post.
Happy New Year to you from the two of us!