Diamond formation: Diamonds found at or near Earth’s surface have formed through four different processes. The plate tectonics cartoon above presents these four methods of diamond formation. Additional information about each of them can be found in the paragraphs and small cartoons below.

Uber to sunset free loyalty program i…
Zuchu – Jaro
What Haircut Should I Get: Definitive…

Many people believe that diamonds are formed from the metamorphism of coal. That idea continues to be the “how diamonds form” story in many science classrooms.

Coal has rarely – if ever – played a role in the formation of diamonds. In fact, most diamonds that have been dated are much older than Earth’s first land plants – the source material of coal! That alone should be enough evidence to shut down the idea that Earth’s diamond deposits were formed from coal.

Another problem with the idea is that coal seams are sedimentary rocks that usually occur as horizontal or nearly horizontal rock units. However, the source rocks of diamonds are vertical pipes filled with igneous rocks.

These processes rarely – if ever – involve coal. 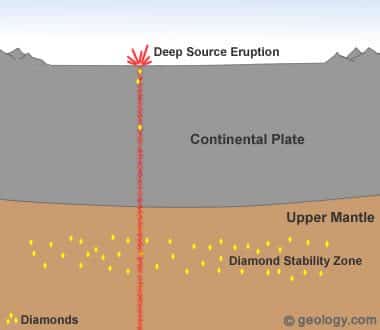 Geologists believe that the diamonds in all of Earth’s commercial diamond deposits were formed in the mantle and delivered to the surface by deep-source volcanic eruptions. These eruptions produce the kimberlite and lamproite pipes that are sought after by diamond prospectors.

Most of these pipes do not contain diamond, or contain such a small amount of diamond that they are not of commercial interest. However, open-pit and underground mines are developed in these pipes when they contain adequate diamonds for profitable mining. Diamonds have also been weathered and eroded from some of these pipes. Those diamonds are now contained in the sedimentary (placer) deposits of streams and coastlines.

The formation of natural diamonds requires very high temperatures and pressures. These conditions occur in limited zones of Earth’s mantle about 90 miles (150 kilometers) or more below the surface, where temperatures are at least 2000 degrees Fahrenheit (1050 degrees Celsius) [1]. The critical temperature-pressure environment for diamond formation and stability is not present globally. Instead it is thought to be present primarily in the mantle beneath the stable interiors of continental plates [2].

Diamonds formed and stored in these “diamond stability zones” are delivered to Earth’s surface during deep-source volcanic eruptions. These eruptions tear out pieces of the mantle and carry them rapidly to the surface [3]. See Location 1 in the diagram at the top of the page. This type of volcanic eruption is extremely rare and has never been observed by modern humans.

Is coal involved? Coal is a sedimentary rock, formed from plant debris deposited at Earth’s surface. It is rarely buried to depths greater than two miles (3.2 kilometers). It is very unlikely that coal has been moved from the crust down to a depth well below the base of a continental plate. The carbon source for these mantle diamonds is most likely carbon trapped in Earth’s interior at the time of the planet’s formation or delivered to great depths by subduction. 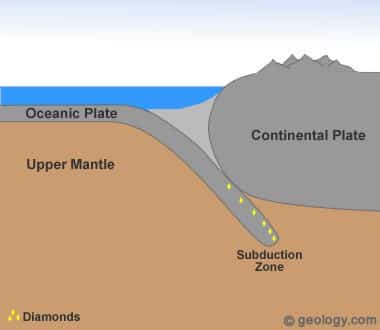 Diamonds From Ocean Sediments? Subduction zones occur at convergent plate boundaries where one plate is forced down into the mantle. As this plate descends, it is exposed to increasing temperature and pressure. Diamonds have been found in rocks that are thought to have been subducted and then returned to the surface. These types of rocks are very rare, and no known commercial diamond deposits have been developed within them. The diamonds found in these types of deposits have been very small and not suitable for commercial use.

Tiny diamonds have been found in rocks that are thought to have been subducted deep into the mantle by plate tectonic processes – then returned to the surface [4]. (See Location 2 in the diagram at the top of the page.) Diamond formation in a subducting plate might occur as little as 50 miles (80 kilometers) below the surface and at temperatures as low as 390 degrees Fahrenheit (200 degrees Centigrade) [1]. In another study, diamonds from Brazil were found to contain tiny mineral inclusions consistent with the mineralogy of oceanic crust [8]. Others have inclusions that suggest that subducted seawater was involved in their formation [9].

A more recent study investigated the origin on blue, boron-containing diamonds that formed at depths as great as 400 miles (650 kilometers). These super-deep diamonds also contained inclusions indicating that they were derived from subducted oceanic crust. [10]

Is coal involved? Coal is not a probable carbon source for this diamond-forming process. The most likely carbon sources from the subduction of an oceanic plate are carbonate rocks such as limestone, marble, and dolomite, and possibly particles of plant debris in offshore sediments. 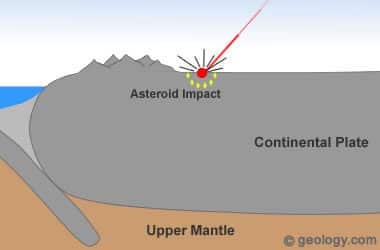 Asteroid Impact Diamonds: Diamonds have been found in and around the craters of many asteroid impact sites. An excellent example is Popigai Crater in northern Siberia, Russia. Earth has been repeatedly hit by asteroids throughout its history. These asteroids hit with such force that pressures and temperatures high enough to form diamonds are produced. If the target rock contains carbon, the conditions needed to form diamonds might occur within the impact area. These types of diamonds are rare and do not play an important role in commercial diamond mining.

Throughout its history, Earth has been repeatedly hit by large asteroids. When these asteroids strike the earth, extreme temperatures and pressures are produced. For example: when a six mile (10 kilometer) wide asteroid strikes the earth, it can be traveling at up to 9 to 12 miles per second (15 to 20 kilometers per second). Upon impact this hypervelocity object would produce an energy burst equivalent to many nuclear weapons and temperatures hotter than the sun’s surface [5].

The high temperature and pressure conditions of such an impact are more than adequate to form diamonds. This theory of diamond formation has been supported by the discovery of tiny diamonds around several asteroid impact sites. See Location 3 in the diagram at the top of the page.

Is coal involved? Coal could be present in the target area of these impacts and could serve as the carbon source of the diamonds. Limestones, marbles, dolomites, and other carbon-bearing rocks are more likely carbon sources than coal. 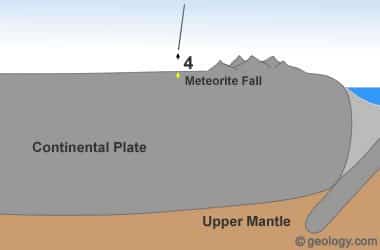 Extraterrestrial Diamonds: Diamonds have been discovered in some meteorites. These diamonds are thought to have formed in space in response to asteroid impacts or other severe events.

NASA researchers have detected large numbers of nanodiamonds in some meteorites. (Nanodiamonds are diamonds that are a few nanometers – billionths of a meter in diameter.) About three percent of the carbon in these meteorites is contained in the form of nanodiamonds. These diamonds are too small for use as gems or industrial abrasives; however, they are a source of diamond material [6]. See Location 4 in the diagram at the top of the page.

Smithsonian researchers also found large numbers of tiny diamonds when they were cutting a sample from the Allen Hills meteorite [7]. These diamonds in meteorites are thought to have formed in space through high-speed collisions similar to how diamonds form on Earth at impact sites.

Is coal involved? Coal is not involved in the creation of these diamonds. The carbon source is from a body other than Earth.

In the 1950s, new methods of diamond formation were discovered on Earth’s surface. Scientists were able to create the temperature and pressure conditions needed to create diamonds in a lab. Most of the early diamonds were not gem quality, but they were perfect for use as abrasive granules in drill bits, cutting tools, and grinding wheels. Soon larger lab-grown diamonds were being manufactured for use as wear-resistant bearings, heat sinks for computer processors, and high-temperature windows.

Today almost all of the diamonds used in industrial processes are lab-created diamonds. They are also being made in high enough qualities to earn colorless and very very slightly included grades from diamond grading labs. They are made in a spectrum of colors by adding nitrogen (yellow) or boron (blue) to the diamond-forming environment. Green, pink, orange and other colors are possible with post-growth treatment processes. Lab-created diamonds are being made in the United States and several other countries. China is the leading country producing lab-created diamonds.

All lab-grown diamonds are made using equipment that consumes an enormous amount of electricity, which is needed to create the temperature and pressure conditions necessary to grow diamonds. Some of that electricity is likely to be generated from burning coal. These might be the best examples of diamonds being made using coal.

The most convincing evidence that coal did not play a role in the formation of most diamonds is a comparison between the age of Earth’s diamonds and the age of the earliest land plants.

Since coal is formed from terrestrial plant debris, and the oldest land plants are younger than almost every diamond that has ever been dated, it is easy to conclude that coal did not play a significant role in the formation of Earth’s natural diamonds.

The post How Do Diamonds Form? | They Don't Form From Coal! appeared first on GulpMatrix.

This post first appeared on Gulpmatrix, please read the originial post: here
People also like
Uber to sunset free loyalty program in favor of subscription membership
Zuchu – Jaro
What Haircut Should I Get: Definitive Men’s Guide