After announcing the existence of Rocket Lake (on a blog post) – Intel’s 11th Generation of desktop CPUs earlier this month, Intel has let more details out about the new CPUs, which are supposed to hit markets in the first quarter of next year.

It is not an exaggeration to say that Skylake had overstayed its welcome on Intel CPUs. It had been around since 2015, part of the 6th Generation! The many successors of it were present in the 7th through 10th Generation of Intel desktop CPUs. So finally, Intel has decided to move on. In the previous generation, we saw Intel move to a newer socket, LGA 1200 as well, so Skylake managed to be on two different sockets for the same target market too. Hence, yes, Skylake had spent some time around here. Such was its time here that Intel had started to feel like it was indeed getting long in the tooth.

So, what do we see instead? Cypress Cove. The -Cove series of microarchitectures are meant to be Intel’s foray into their 10 nm manufacturing process, but as the title says, Rocket Lake is not 10 nm. Intel decided to backport Cypress Cove to their 14 nm process, in all likelihood while also trying to make sure that they get to manufacture the subsequent generation of chips after Rocket Lake on a newer process. Intel boasts about “double-digit” IPC gains over the outgoing microarchitecture, particularly highlighting its benefits for gaming performance uplifts. We will also see up to 8 cores and 16 threads, which is down from the current generation’s 10 cores and 20 threads at the highest.

Rocket Lake also includes Intel’s Xe– LP graphics to help their integrated graphics, as that facet of Intel processor technology had seemingly stagnated for about half a decade previously, due to a lack of need for something better. The included GPUs will be powered by the same architecture as Tiger Lake’s laptop GPUs, again backported on to the 14 nm process. Per Intel’s claims, these are bound to reward the user with an enhanced overall experience. Support for HDMI 2.0b, DisplayPort 1.4a and HBR3 DisplayPort allows for the bandwidth for up to three 4K or two 5K monitors, each at 60 Hz.

The new CPUs will also bring PCIe 4.0 support to Intel consumer platforms, with 20 PCIe lanes to the CPU, suggesting a single 16x and one 4x setup on most motherboards for minimising latency between the CPU and GPU, while leaving enough lanes for a PCIe SSD as well. Intel also has mentioned a 500-series chipset that will accompany the new CPUs, and it is reasonable to expect them to carry PCIe 4.0 support as well. 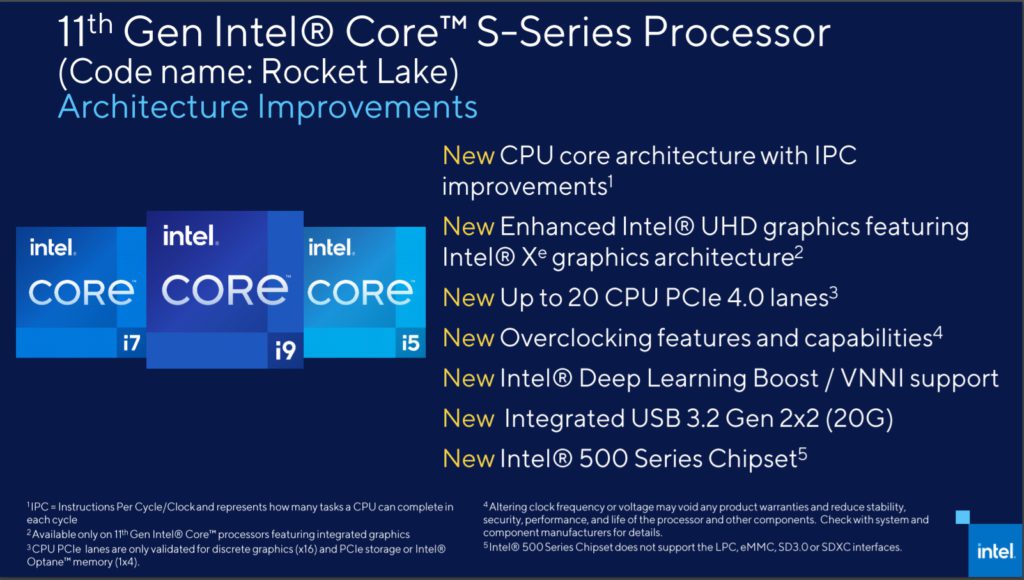 Other features talked about by Intel include new technologies, such as Intel Deep Learning Boost Vector Neural Network Instructions (VNNI), for improved performance in AI-related workloads, as well as a slew of encodes as shown. Additionally, a new memory controller brings support for DDR4-3200 RAM on the upcoming platform. 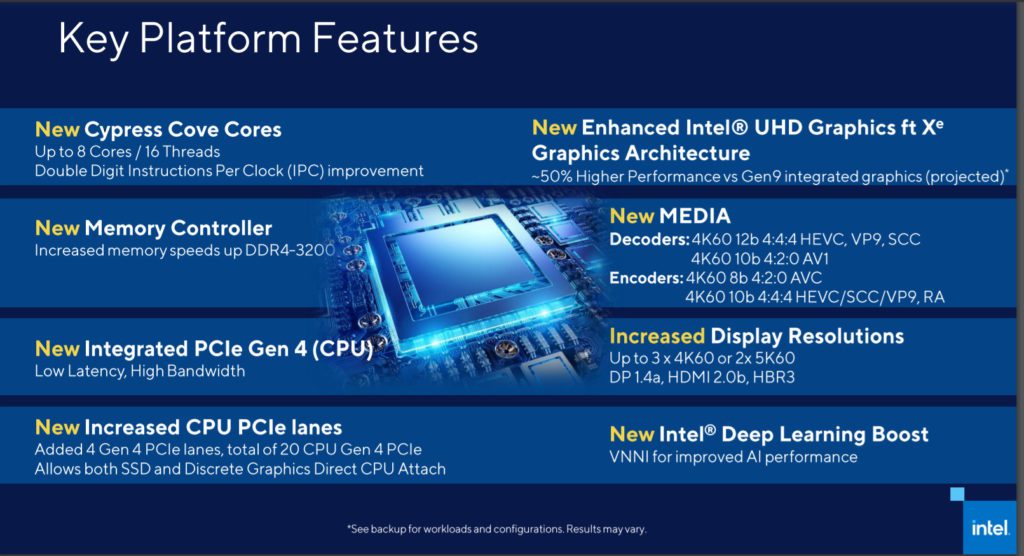 This announcement seems a little rushed and out-of-the-blue for Intel, but that was also the case with the first announcement about Rocket Lake. It may still be worth noting if Intel divulges further info about their next product before it is launched.