The side control (BJJ side mount) is one of the foremost dominant Brazilian jiu-jitsu positions. Thus, the side Mount BJJ offers many submissions opportunities and game transitions to other dominant positions. Therefore, an experienced fighter knows that the side control BJJ can give them smooth submissions including the BJJ armbar, kimura, Americana, chokes, triangles, etc. In addition, they can switch to the north-south position or other awesome and dominant positions.

Often, the newest BJJ practitioners misunderstand side control position, especially in terms of points and competition use. Moreover, the presence of several side mount variations could be sometimes more confusing for beginners BJJ grappling people.

As an edge, Jiu Jitsu side mount may be a fundamental pillar of Brazilian Jiu-Jitsu basics. In addition, there is no way around it and therefore the sooner you understand all the associated variations, the earlier you’ll put them to good use.

Although, the jiu jitsu side control could be a bad position (maybe the worst) for many BJJ martial artists who find themselves at the rock bottom side mount. Therefore, the bottom players could found several issues to escape from side control bjj, especially if the person on the top is an experienced one.

As a result, the side mount BJJ can often be mistaken, and difficult to maintain a plethora of Brazilian jiu-jitsu practitioners.

How BJJ folks view the side control position? All Jiu-Jitsu folks perceive the side control position differently as they progress through BJJ martial arts. In the beginning, they see it as the next cool position after passing the opponent guard, where they could apply massive pressure, get points, and prohibit the opponent from processing an escape.

However, the BJJ students find that there are many cool things to do from the side control other than the 100 kg pressure. Therefore, they start to become dynamic players with a good managing of submissions, transitions, timing, and weight.

We will discuss in this Brazilian jiu-jitsu article the elemental aspects of BJJ side control. Moreover, we will reveal the most wanted side control submissions, transitions, escapes, and variations. Sure, you will fall in love with jiu-jitsu side mount at the end of this article, and regain trust to play it again.

BJJ Side Control Basics And Fundamentals

The side control is one of the best BJJ positions to be in, especially if you have a dynamic attacking game from the top. Furthermore, it is essentially a cross-body position, which allows the Jiu-Jitsu practitioner to control the opponent’s upper body.

The BJJ Side mount offers many submission options that involve both joint locks and chokes. Indeed, the side mount is also the fertile position to use the jiu-jitsu basic moves, techniques, and fundaments just like the BJJ mount or the back control. One of the purposes of the side control position player is to control the BJJ opponent’s upper body through pressure and mechanical leverage. Therefore, the student has to control the opponent’s neck or/and hips by installing the correct grips. Indeed, you may need to regulate your body to be at a 90-degree angle within your opponent for more pressure and stability.

You should maintain the side mount position for more than six seconds without giving no chance to your opponent to escape this position.

Although, an advanced BJJ fighter will escaping very fast the bottom side control to prevent a submission. Thus, maintaining the side mount position might be a very difficult task like all Brazilian jiu-jitsu positions. Any Brazilian jiu-jitsu student could not play the side control position without a good weight distribution and pressure. Although, staying active while playing the top side mount will give the BJJ student more leverage to prevent your opponent from processing some escapes from the side control.

Moreover, the student could transit between a number of the foremost common side control variations. 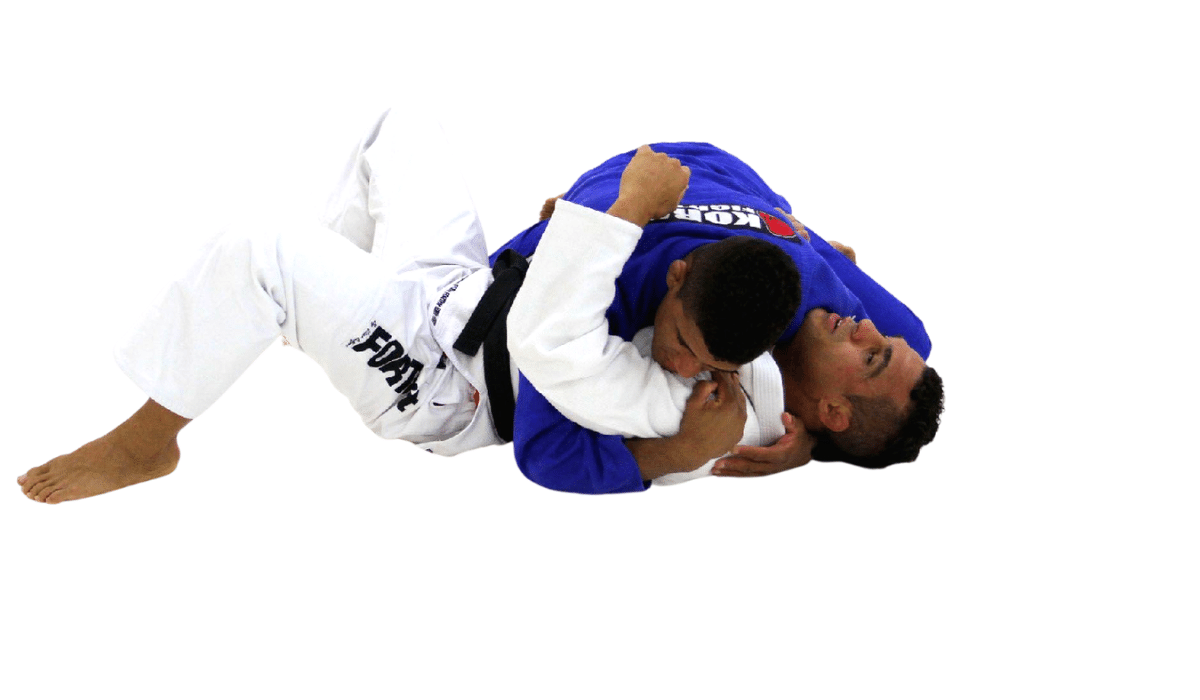 The classic side control is usually referred to wrestler’s side mount position. Moreover, in this BJJ side control variation, a student would like to past the opponent’s guard then frame his/her from moving or escaping the position.

Therefore, you have to control the opponent’s neck and hips; indeed, it is possible to use the chest-chest contact for more control especially against heavy opponents.

Furthermore, the cross-face may be an awesome weapon to get what you want at the top classic side control in Brazilian jiu jitsu. In addition, don’t neglect the shoulder, hands, and face work to block the opponent’s movements and put him in a discomfort situation.

The 100 kg side control is one of the favorite side mount variations for many jiu jitsu practitioners especially heavy BJJ fighters. The main fighter’s purpose in playing this position is putting massive pressure on his opponent. However, The 100 kg side mount position allows to the opponent to escape, because of the lack of compactness.

As the classic Side mount position, in the 100 kg position, the practitioner starts from the same starting position, and then he should the opponent’s upper body for example using cross-face.

Although, there are some differences between these two side control variations such as leg positioning. Thus, you would like both your legs sprawled behind you when you are at the 100 kg side control.

Other important things to do perfectly on the 100 kg side mount you have to concentrate carefully on where you put your chest (at the middle of the opponent’s torso may be good); also, you need to manage your weight for maximum pressure.

The Kesa Gatame may be a good transition in between side control variations. Furthermore, Kesa Gatame is among the basic mat holds in Judo martial arts.

The Kesa Gatame is an awesome side mount position that can disturb the opponent’s mood due to the great hold and control produced. Furthermore, the Jiu-Jitsu Kesa Gatame techniques are among the basics are head control, trapping the near pistol, and leg positioning.

At this BJJ side mount variation, you would like to get on your hip/butt, legs spladled pointing towards the opponent’s head, and keep your head low near your opponent’s head. Although, the weak side of this side control variation is that if you stay for long at it your opponent may find ways to take your back.

The Reverse Kesa Gatame may be a far more practical position for the BJJ side control position. It’s just an equivalent of the Kesa Gatame, but you’ll be facing the opponent’s legs.

Otherwise, the Reverse Kesa Gatame is additionally called twister side control and it is a great position for hunting submissions in Brazilian jiu-jitsu. Nevertheless, in this position you’ll obstruct the opponent’s view, thus he can’t predict your sneaky making grappling submissions moves.

The Twister side control may be a reverse Kesa Gatame variation in jiu-jitsu grappling martial arts. Therefore, it’s an excellent way to isolate the opponent’s head and shoulders, and a niche of several powerful BJJ martial art submissions. Otherwise, the side control twister offers to the practitioner a great possibility to regulate the hips using his/her legs and making it so effective.

Moreover, the twister body positioning exposes many BJJ transitions including the mount, back take, and truck position. In addition, it offers a variety of sneaky submissions such as armlocks, Arm triangle choke, kneebar, D’arce choke … The BJJ grappling side control is a niche of a plethora of sneaky Gi / No-Gi Brazilian jiu jitsu submissions including joint locks, chokes…

Darce choke from side control

The Darce choke is one of the most popular head and arm chokes variations in Brazilian jiu-jitsu. Furthermore, the D’Arce choke is a tough BJJ submission that can be applied from the side control positions, half guard, mount …

Here an awesome jiu-jitsu instructional video on how to do the D’Arce choke from side control. Stay tuned!

Kimura Lock from BJJ side control The BJJ Kimura may be the sneakiest submissions from the side control. To learn more about the Jiu-Jitsu Kimura Lock from the side mount in the video below.

Straight Armbar From Side Mount The Near-Side armbar is among sneaky BJJ martial art submissions, because more likely at the starting position your opponent will be expecting a spinning arm lock (or juji gatame), but you’re just stepping up and finishing the near-side arm moves.

Learn how to do near side armbar from side control in this instructional BJJ, have fun!

Baseball Bat Choke From Side Control

The Baseball bat choke is one of the sneakiest BJJ martial art chokes from the side control position. Besides, once you get this choke it’s really difficult to get out.

Moreover, the key point to do a savage baseball bat choke is by maintaining pressure using your shoulder onto your opponent’s face to prevent him from facing you and bridging out, which may be a way to escape side-control.

In this video, learn how to do Baseball bat choke from side control, have fun! The side control is often a hard position to be stuck in, despite being an inferior position in Brazilian jiu-jitsu martial arts. Therefore, the BJJ side mount will become harder if you’re positioned underneath a heavier and stronger opponent. Thus, escaping the side control will be difficult if the opponent has already controlled your head and arm.

How to escape side control?

It is important to know the basics escaping side control techniques that will help you to deal with tough control and heavy pressure in this position.

The BJJ Side control is among the foremost common position in Brazilian jiu-jitsu. There is no well beyond a side control variation during a roll, whether you are on the receiving or giving an end to it.

The Side Control has always been among the foremost powerful and dangerous positions in jiu jitsu grappling martial art. It is extremely hard escaping the Side Control when it’s performed correctly, and therefore the position makes possible a mess of attacks, which will easily overwhelm any BJJ opponent.

Unfortunately, too many students only see it as a stalling position — their goal is merely to carry their opponent down long enough to attain points, and that they hope that they will eventually transition from the Side Control to the Mount or Back Control.

Speak your mind; what is your favorite BJJ side control variation or submission?