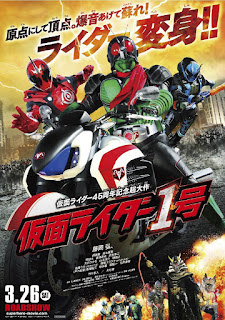 So the other day, I asked myself a question: why do I like Kamen Rider?
Call it a crisis of faith, I guess.  It’s easy to get caught up in something and follow it out of some unspoken sense of obligation -- like you’re just going through the motions, because “I did the thing once, so I might as well do the thing again.”  I’m pretty sure I’ve typecast myself as some kind of Rider fanatic, given how many times I slip allusions, images, and even secret references into my posts.  (To say nothing of the posts actually about Kamen Rider.)  In a perfect world, people would pay more attention to that stuff instead of huddling around the campfire when I upload a post on Final Fantasy/Kingdom Hearts/the madhouse that is Squeenix.  But I digress.

How To Stay Focused And Motivated In …
Idle Heroes Tier List – September 201…
I found a new place to be SMART
Faces in the Crowd: D.A. Pennebaker
Pokémon Masters Pre-Registration Open…
Pared down to basics, I like KR because I like heroes.  And not to get maudlin or pitiable, but it’s a safe bet that I needed to see heroes in my life.  After all, it’s probably not a coincidence that I started seriously getting into the franchise in the same year -- 2013 -- that I went through some major personal losses.  Beyond that, I had to deal with the frustration of having my own works -- my writing, my dreams, and my own batch of heroes -- rejected to the point where I scrapped and rebooted years of work.  Beyond that, it seemed like fiction in the western world had basically given up on heroes.  Man of Steel turned Superman into a braindead whirlwind of destruction and angst.  The Walking Dead became a hit with a cast of survivors barely a cut above the zombies they routinely shot in the head.  I…I don’t even want to talk about DmC.
I’ll argue that the world needs heroes -- even, if not especially fictional -- but I’ll also acknowledge that that’s some top-tier projecting.  Ineed heroes.  KR delivered, again, and again, and again.  And that’s why I’m here today once again, as a fan, and as a spokesperson.  These are my Top 4 picks of the franchise thus far.
Read more »

I found a new place to be SMART